Scorched Earth: Letter from the editor

Scorched Earth insists on the inseparability of social disintegration and environmental collapse under global capitalism. Civil society and ecosystems are eroding simultaneously.

Scorched Earth: Beyond the Digital Age to a Post-Capitalist World by Jonathan Crary is a selection in the Verso Book Club in April.

I first met Jonathan Crary many years ago in New York, in an act of pure chutzpah. Verso had just moved to its new offices in Brooklyn with a completely new set of staff. It was clear that, although we had been a transatlantic publisher for many years, most US authors still saw us as essentially a British publisher with a marketing team in New York, and they weren’t wrong! It was crucial for our future that we re-establish our reputation as a publishing house that could be a first choice for US radical academics and other writers, as it had been during the glory days of the Haymarket series, edited by Mike Sprinker and Mike Davis. So, I decided during a short trip to New York that it wasn’t sufficient to rely on our remaining band of faithful authors but rather to throw the net as wide as possible. Going through the lists of all the humanities and social science departments of all the major universities in the city, I set up a slew of appointments on the basis of “nothing ventured, nothing gained”.

To be honest, I didn’t have much hope of attracting Jonathan to our list, both because he was a highly prestigious author of two crucial books with high-end academic presses in the field of visual studies, Techniques of the Observer and Suspensions of Perception, and because he is centrally involved with another excellent project, namely the gorgeous Zone Books, distributed by MIT Press. But, at the very least, I told myself, he might tell me a little about their operation and maybe give me some leads for younger scholars I could look up. To my surprise and delight, Jonathan was not only keen to chat but also quite quickly proposed an essay to us which was to become 24/7: Late Capitalism and the Ends of Sleep.

The latter proved to be an immense success for Verso, selling 25,000 copies over its lifetime since publication in 2013 (and published in eighteen foreign languages). Key to its impact, I think, was not only Jonathan’s gifts as a succinct and powerful writer (“A polemic as finely concentrated as a line of pure cocaine”, dixit the Los Angeles Review of Books – and they should know, am I right?) but also because it captured the post-Occupy Zeitgeist: namely, the growing anger and disgust at the realisation that neoliberal capitalism was seeping into and warping our most intimate experiences of everyday life, up to and including the world of sleep itself.

After almost a decade, Jonathan’s new book, Scorched Earth: Beyond the Digital Age to a Post-Capitalist World is very much a continuation, both in form (a hybrid of the polemical essay and the pamphlet) and content (broadly speaking, a critical theory-infused post-Situationist dissection of the ugliness and monstrosity of the dominant mode of production) of 24/7. But, this time, the critique is even more savage and frank. For Jonathan, the inevitable product of the non-stop, permanently switched-on world of consumption, extraction, combustion, financialization, militarization is a scorched earth, a landscape of devastation.

The book insists on the inseparability of social disintegration and environmental collapse under global capitalism. Civil society and ecosystems are eroding simultaneously. “Scorched earth capitalism” is destroying whatever allows groups and communities to pursue self-sufficient subsistence, self-governance or patterns of mutual support. This phase of “very, very late capitalism” is necessarily pursuing the obliteration of any traditional forms of social existence and makes the precariousness of life and work into a fundamental systemic goal, not simply a secondary by-product.

In the face of this, argues the book, despite all the talk of “postcapitalism” or “anticapitalism” that have grown in popularity, one cannot be seriously considered an enemy of capitalism while valorising the apparatuses and systems that are constitutive of its functioning. The goal of socialism, as a transformed set of lived relations with others, is irreconcilable with a passive acceptance of contemporary technological culture as inevitable and "here to stay". One of the last remaining ideological supports for global capitalism is the current sanctification of "Science" and its preposterous essentialization as an a priori source of truth, detached from any historical or economic determinations.

The extensive and many-sided critique of the limits and failings of Western science has been rendered invisible or unmentionable, except by conspiracy theorists and new agers. The survival of life of the planet now depends on reanimating this critique and recovering an awareness of how most of the foundational paradigms of Western science and technology have brought us to our current disastrous situation. Most centrally, Scorched Earth aims to unsettle the myth of a "digital age" which is fraudulently posed as a quasi-autonomous and unalterable determination of the entire material culture of our present. The reality, however, is that when capitalism collapses, the mirage of a "digital age" will evaporate at the same time.

Beginning with Techniques of the Observer, Jonathan's work has addressed historical transformations in the nature of perception since the nineteenth century. Along with his later Suspensions of Perception: Attention, Spectacle and Modern Culture, he studies the modernization of the observer and the shaping of a subject capable of fulfilling new requirements of work and consumption. But he also explores sleep and attention as perceptual modalities that can be crucial sites of autonomy, creativity and non-compliance. Scorched Earth continues some of these concerns with an examination of biometric procedures such as eye-tracking, iris scanning and face, voice and emotion recognition. The book's concern is not with data mining or surveillance but for how the prevalence of these procedures impoverish the efficacy of the gaze, the face, and speech which are the basis for our ethical relations with others and are what sustains an interhuman lifeworld. Moreover, the management of attention coincides with the routinisation and homogenisation of experience – Scorched Earth discusses the deployment of biometrics by the UXD (user experience design) industry and its reduction of experience to what can be fabricated externally and imposed on an individual.

Scorched Earth is a combination of ice and fire: cool, surgical, clear-eyed analysis and righteous rage to smash the new idols and reforge a new world that is not just an upgrade of the present one, subject to a few design tweaks. It will provoke similarly polarised reactions and that is exactly what it is designed for – to stoke up furious debate about how, in the very little time we have ahead of us, we can strain every muscle to reach and pull the emergency brake of history. 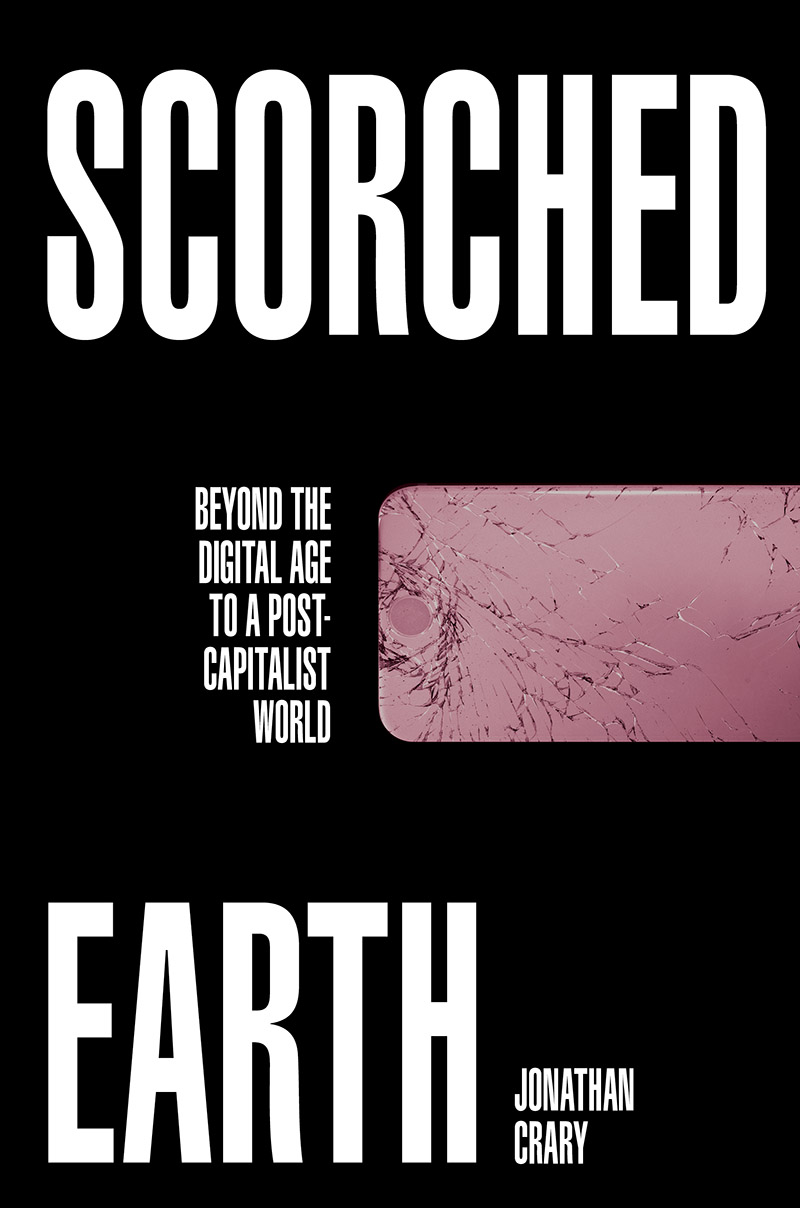