One of the most detailed accounts of the operation of prisons in England was published 100 years ago this year. Entitled English Prisons To-day, it provided a powerful indictment of the state of the country’s penal system, and as John Moore writes, it remains as relevant today as when it was written.

In July of this year, the European Committee for the Prevention of Torture and Inhumane or Degrading Treatment or Punishment published a report on their 2021 visit to the United Kingdom. The document catalogues the disturbing state of British prison, characterised by ‘chronic overcrowding, poor living conditions and the lack of purposeful regimes’. Also published this summer, a UserVoice and Queens University research project into prison regimes since the outbreak of the Covid pandemic declared that the treatment of prisoners in Britain met the United Nations definition of Torture. Taken together, these reports show that British prisons are places of violence, abuse and pain. And yet, such is the frequency that we hear revelations like this, these reports risk losing their capacity to shock. That wasn’t so just a hundred years ago. Then, the determined actions of government and the Prison Commission to keep the conditions inside prisons secret meant that public exposure could not only shock, but even lead to change.

One of the most detailed accounts of the operation of prisons in England was first published 100 years ago this year. The report, entitled English Prisons To-day, provided a powerful indictment of the state of the country’s penal system. Edited and largely written by Stephen Hobhouse and Fenner Brockway, both of whom had been imprisoned as conscientious objectors during the First World War, the report reflects Brockway’s background as an experienced journalist. Unlike the self-congratulatory tone that characterised official prison reports it was both readable and plausible. Hobhouse and Brockway were confident that the evidence they had collected and published in a bulky volume of over 700 pages was sufficiently damming they had no need to sensationalise it.

Its account would not only be familiar to people incarcerated today, but anyone imprisoned over the last century. The ‘architecture is depressing and inhuman’ Hobhouse and Brockway report, ‘the cells are badly ventilated … heating and lighting arrangements for the cells are often inadequate’. The prison routine was characterised by its ‘monotonous uniformity’, with prisoners experiencing ‘17 to 23 hours of daily solitude’, a ‘constant lack of privacy’ and the ‘transformation … of elementary rights into rewards.’ It lamented that ‘Medical officers of good calibre are rarely attracted to the prison service. The medical attention is frequently hurried and callous, and suspicion of malingering is very prevalent’ and ‘the care of the eyes and teeth is neglected’. 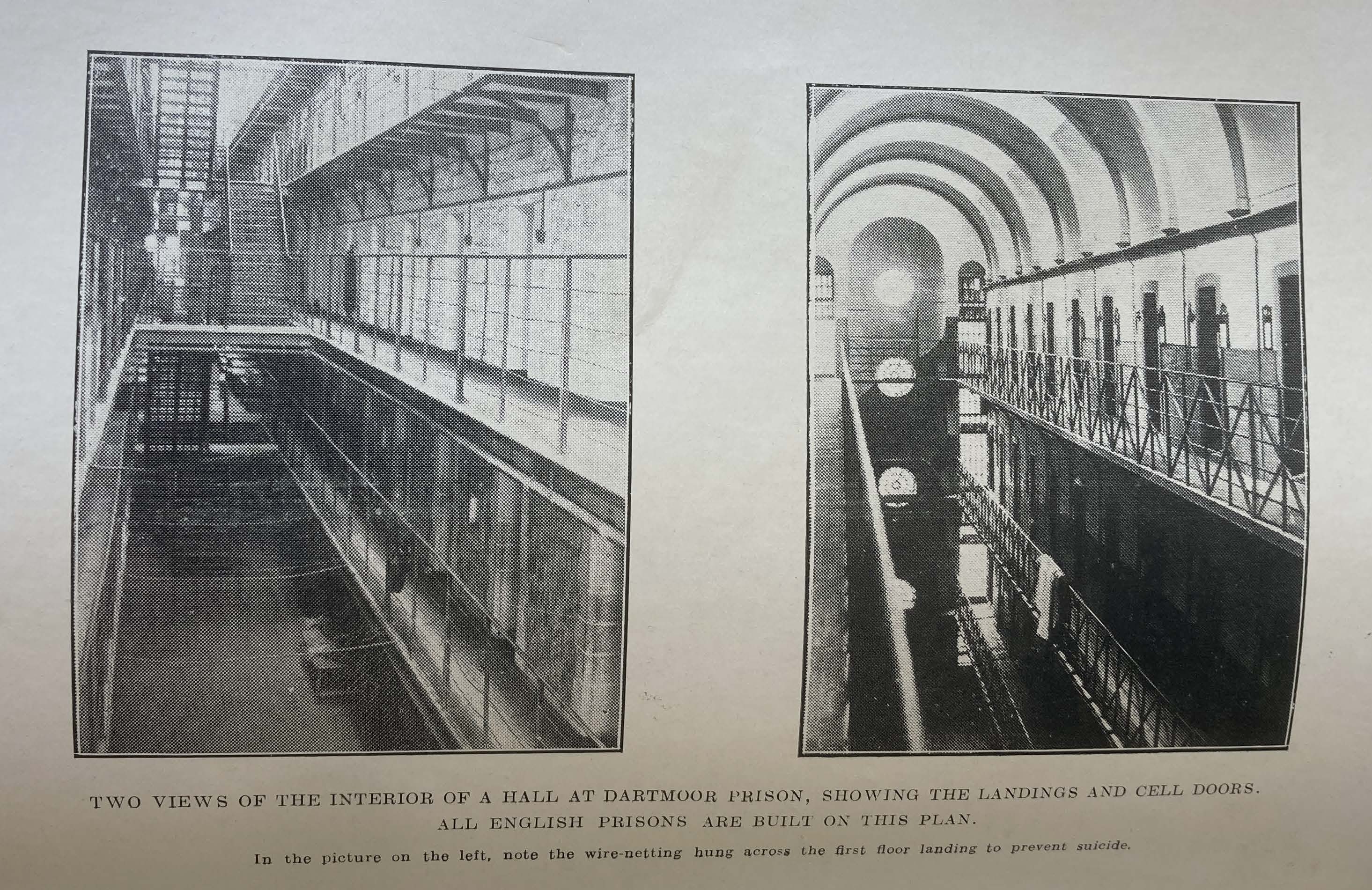 It was not only physical mistreatment that the report highlights, but also the psychological damage caused by prisoners adapting to such ‘an abnormal environment’. Although some of the evidence cited is now dated, the first-hand testimony from prisoners retains its power. In particular, the report cites censored letters, liberated by an enterprising prisoner from Dartmoor, that describe the experience of early twentieth century convicts themselves. The letters were intended to warn families of the impact that prison was having. Through them we hear of how the prison ‘degrades, brutalises … and begets hatred’. ‘Such a life is not worth living’ wrote one convict. ‘If you come to meet me in August, look out for something between a man and a beast, uncouth and uncivilised’; ‘I shall treat mankind now without mercy’; ‘I shall have neither compassion or pity on anyone for the future’; ‘The only thing that prison has done for me is to sow the seeds of revenge against a society that tolerates it’; ‘My bitterest enemy I would not send to prison’; ‘This place is the home … of broken hearts, ruined lives and crushed manhood’; ‘I won’t be sent here any more for being on a roof; I will get inside next time.’

Although eighteenth- and nineteenth-century reformers had hoped that prisons could be “moral hospitals”, and as such act as effective deterrents against crime, these aspirations failed. By the end of the nineteenth century, prison’s legitimacy was increasingly challenged, particularly through the testimony of political prisoners. Irish nationalists, suffragettes and conscientious objectors were all imprisoned for their activism, and the middle-class and politically connected among them possessed a credibility denied the working-class children, women and men who made up the overwhelming majority of those incarcerated. The report itself was another part of this same tradition. The Prison System Enquiry Committee, who commissioned English Prisons To-day, was established directly after the First World War with a membership made up of the great and good of the day. Prominent members included Fabians and social reformers George Bernard Shaw, Beatrice and Sidney Webb, as well as a number of former prisoners. 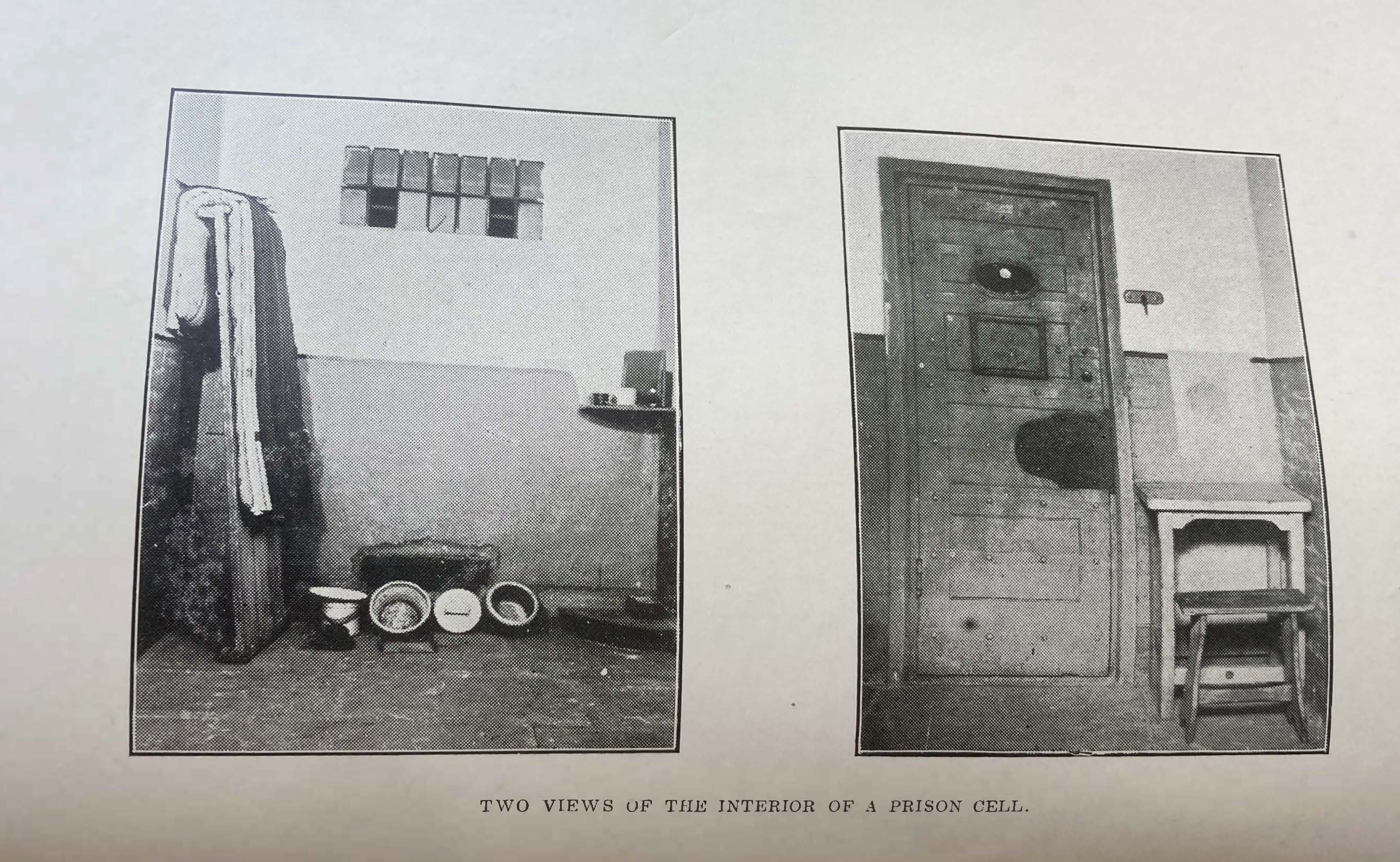 In their foreword, Hobhouse and Brockway are clear that the ‘object of the Enquiry has been the discovery of the facts, and not the preparation of proposals of reform.’ Despite this aspiration, English Prisons To-day is at times unable to resist the temptation towards advocacy. Margery Fry, the secretary of the Howard League, who had been a member of the Enquiry Committee, described it as ‘the Bible of penal reform’, and the book was adopted by many reformers, both inside and outside the prison, as the basis for a reform agenda. Indeed, in a way that is unimaginable today, it had a significant impact on penal policy in the inter-war years. While it was in press, a new Chairman of the Prison Commission, Maurice Waller, was appointed. He studied the report and pushed through a number of reforms that attempted to address at least the worst aspects of imprisonment highlighted by Hobhouse and Brockway. Alexander Paterson, one of the contributors to the Enquiry, who had largely written the chapter on Borstals, was appointed a Commissioner. The next two decades were the high point of English prison reform. Yet, despite the adoption of a more humanitarian rhetoric by the Prison Commission, the evidence of prisoner autobiographical accounts suggests that within most prisons the violence of incarceration continued unabated.

It is important then not to overstate the impact of the report. Indeed, the most important development in early twentieth century English penal policy – the substantial reduction in the number of people imprisoned – predated its publication. In 1903 approximately 200,000 people were sent to prison. Yet by 1918 this had been reduced to 30,000. The daily average prison population fell from 20,000 in 1903 to 9,000 in 1918. This reduction was achieved by a combination of legislative changes – like the introduction of probation, and allowing people time to pay fines – and the co-operation of magistrates and judges. It had nothing to do with levels of crime, which continued to rise. Today, when the UK’s government response to the European Committee on Torture is to commit to building more prisons and recruiting more guards, there is a clear lesson here. The number of people incarcerated is a political choice, one entirely independent of recorded levels of crime.

Reading the report today, several lessons are obvious. The problems prison face are not new. They have been a constant throughout the history of the penal system. Imprisonment has repeatedly faced legitimacy crises, and when subjected to scrutiny prison has long been judged to fail to achieve its stated intentions – those being deterrence, retribution, rehabilitation or public safety. However, the solutions sought by reformers have seen this as a malfunction rather than an inherent defect of the system itself. The solution, they argue, is the reformed prison.

While reform may be possible, it is always likely to be limited and difficult to sustain. The publication of the report in 1922 may have provided reformers with their Bible, and with Paterson as the dominant Commissioner progress was made. After 1922, the mandatory period of solitary confinement was abolished for prisoners, and the rules of silence abandoned. The borstal system, particularly the open borstals, were for a time a genuine innovation. But despite the low levels of imprisonment achieved in 1918 being sustained throughout the interwar period – as well as the commitment of reformers inside and outside the Prison Commission – the changes were limited. Brendan Behan, imprisoned in 1939, may have written affectionately in Borstal Boy about his experience of Hollesley Bay borstal, but his account of his time on remand in Liverpool prison shows that violence and abuse remained central to the prison’s regime.

Borstal itself, the innovation reformers were most proud of, was to degenerate after the Second World War into the abusive regime vividly portrayed in Alan Clarke’s Scum. Such an outcome should not have surprised one of the former prisoners quoted in the report. ‘Reforms have been tried before,’ he wrote, ‘but when the reformers with their enthusiasm have passed away, the whole thing has become stereotypes, and formal, and – a system.’ The history of prisons is one littered with reforms that soon crumble when subjected to punitive clawback. 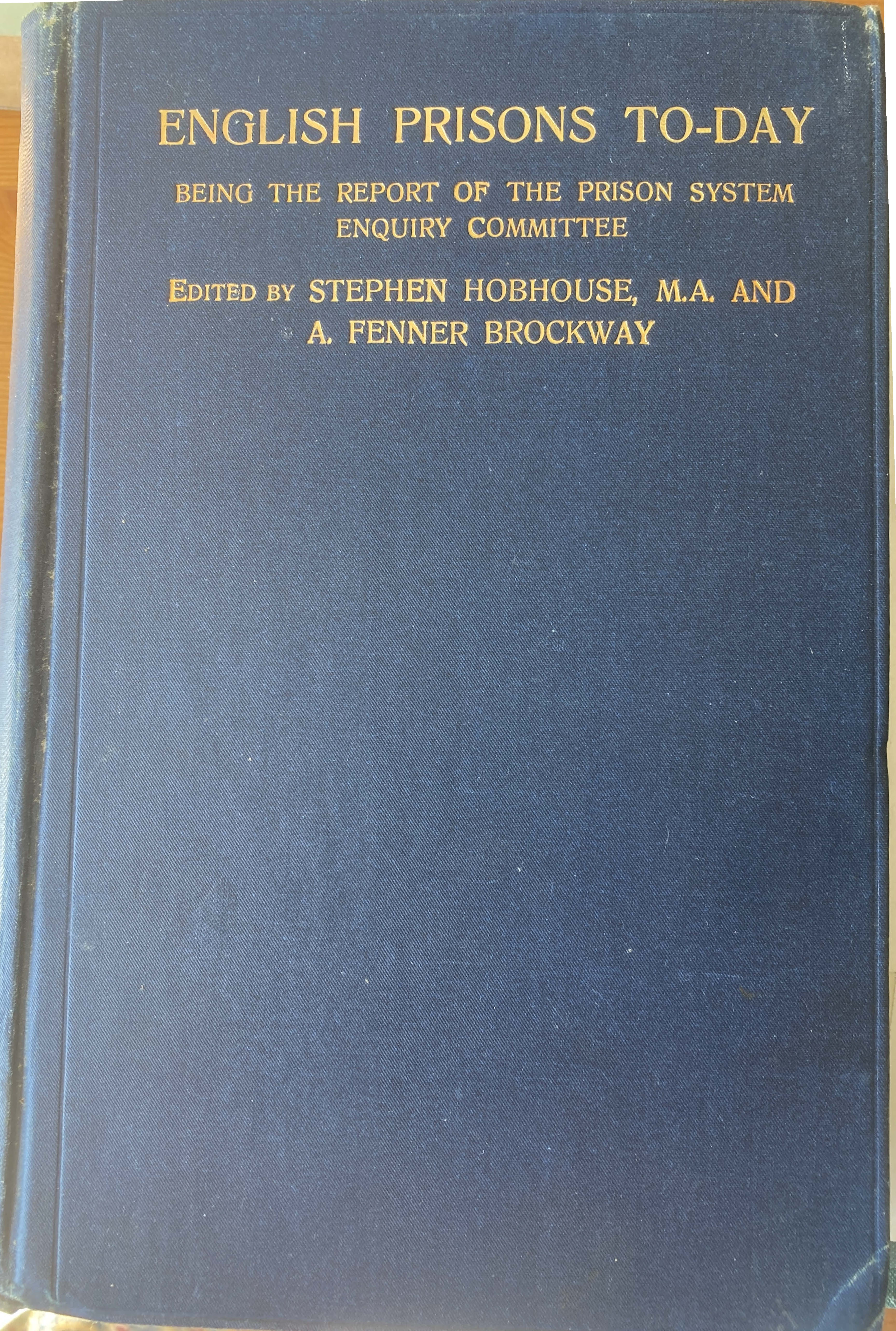 In setting out to establish the reality of the prison system, the English Prisons To-day report identified the many defects of English prisons. But, despite the use to which reformers would put it, it also recognised that ‘if these defects were remedied … such reform would be rather a palliative than a cure.’ A real reform agenda would require seeking solutions that were ‘political rather than specifically criminological.’ Brockway would later repeat this argument when he highlighted that the fundamental problem lay not in prison administration, but in the way that society was organised. Society was for him ‘the Super-Criminal’. The problems of crime and prisons were, he concluded, ‘inseparable from the problem of the social and economic system.’

This focus on the social context within which prisons exist is crucial to solving the prison ‘problem’.  Whilst it is tempting to endorse the aspiration of one of the English Prisons To-day ex-prisoners who suggested that the ‘first reform’ should be ‘to pull down all existing prisons’, this would only lead, unless accompanied by wider social change, to new ‘reformed’ prisons being built.  There is nothing natural about prisons. They exist today because they perform a social function, and alongside the rest of the criminal justice system help maintain our existing unjust social order. As Ruth Wilson Gilmore has pointed out: ‘Abolition is about abolishing the conditions under which the prison became the solution to problems, rather than abolishing the buildings we call prisons.’ English prisons today, or a hundred years ago are – and will always be – fundamentally violent and abusive institutions. They need abolishing. To do so would require the construction of a radical different society, one that does not require the inflicting of pain on so many for its maintenance.

John Moore is a writer and activist based in west Wales. Twitter: @Moore_J_M