A Companion to Marx's Grundrisse: A letter from the editor

"David Harvey has done yeoman’s work [...] by explicating as simply and clearly as possible this preparatory text, in his typically sober and no-nonsense style." – Sebastian Budgen, Editor.

A Companion to Marx’s Grundrisse by David Harvey is part of our February Verso Book Club reading. See the rest of our spring book club picks here.

Composed as a series of notebooks by Marx in 1857-8, the Grundrisse der Kritik der Politischen Ökonomie (Foundations of a Critique of Political Economy) or simply the Grundrisse lay undisturbed but for manducating rodents until its first publication by the Marx-Engels Institute in Moscow in the ‘difficult’ years 1939-41. Translations were slow to appear: the English edition, translated by Martin Nicolaus and published by Penguin in association with New Left Review in 1973 came only after translations of the full text (or the initiation of translation projects over several years) in Japanese, Chinese, French, Russian, Italian, Spanish, Swedish, Czech, Hungarian, and Romanian. But, at least in Western Marxist circles, once it had appeared it acquired the reputation of a mysterious and fascinating text, heralded by some as providing a hitherto inaccessible “key” to Marx’s thought and even threatening to topple Capital from its place as crown jewel of his oeuvre. (For an interesting collection on the various interpretations and misinterpretations, see In Marx's Laboratory: Critical Interpretations of the Grundrisse, Edited by Riccardo Bellofiore, Guido Starosta, and Peter D. Thomas.)

Given this context, and the somewhat more explicit Hegelian style, the text is often seen as intimidating and skipped by some Marxists. But, having tackled the first three volumes of Capital (his Companion to Marx’s Capital Volume 2 also covers significant sections of Volume 3), David Harvey has done yeoman’s work – exploiting the time afforded him by the Covid lockdown - by explicating as simply and clearly as possible this preparatory text, in his typically sober and no-nonsense style. David is particularly good at deflating some of the extravagant (some may say fanciful) overreading some have indulged in regarding the famous passage on the “General Intellect”:

The passages that follow on fixed capital and the general intellect constitute a high point of theorizing in the Grundrisse. There is some remarkable writing and insights into the nature of capital in these pages. There has also been not a little controversy over how to interpret some of the key concepts. It is wonderful stuff, beautifully written and quite startling in its potential implications. Its insights into the dynamics of a capitalist mode of production, it turns out, are deeply relevant to our own time. …

Much has been made in the recent literature of Marx’s invocation of “the general intellect” in this passage. In my view, far too many of the readings are idealist, in the sense that they evoke the power of some ruling idea governing capital’s evolution. It is sometimes presented as some abstract or even occult power—“the general intellect”—which God-like rules over capital in mysterious ways, its wonders to perform. This is, however, the only place I can find in the whole corpus of Marx’s works where he uses this term, though a couple of pages later he does refer to “the social intellect” as “the precondition of the productive power of the means of labour as developed into the automatic process”. It seems rather presumptuous to base a whole interpretive school of Marxist thought—that of cognitive capitalism—on this unique concept, which is mentioned only once and at that in the Grundrisse, which is by far Marx’s most imaginative but also most experimental work.

But David’s primary concern in this book, as with the other Companions, is not to engage in turf warfare on the Marxological front, but is, rather, motivated by a profoundly democratic and paedagogical spirit, that is also testified by the interaction between his online classes and his written texts (readers are strongly encouraged to participate):

Most people, when confronted with Marx’s voluminous works on the critique of political economy, find them difficult, intimidating and confusing. As a result, there have arisen a variety of interpretations of his work by scholars and activists alike, coalescing in some instances into what appear to be factions or even whole schools of thought as to what the correct line is for elaborating on Marx’s theoretical contributions. Political parties of the left (particularly of a communist persuasion) have often shaped distinctive but somewhat rigid interpretations suited to their political situation and agendas. Marx, being the controversial figure that he is, has also attracted his share of personal vilification from opponents. Deliberate misrepresentations and false representations abound, along with more sophisticated and subtle attempts to undermine his views. All of this creates expectations and a climate of presumption and prejudgment that makes a simple and uncluttered reading of any of his texts virtually impossible.

My aim was and is to open a door into Marx’s thinking and to encourage as many people as possible to pass through it and take a closer look at the texts and make of them what they will. I have no interest in trying to impose my own particular interpretations on anyone. That is why I call my books on Marx “companions” rather than guides. I cannot, of course, open a path to an understanding of Marx’s thought without using my own experience and interests as crucial helpmates for interpretation. The fact that my main interest has been urbanization and uneven geographical development, at a variety of scales, clearly affects the way I evaluate Marx’s texts. I imagine myself, however, accompanying the reader on a long hike in which I point out this and that particular feature here and there, drawing upon my long experience of working with the text, and highlight moments of epiphany for me, linking ideas together, when possible, while always wondering and asking what it is that you, the reader, might make of it all. In teaching Marx over the last fifty years, I have been incredibly fortunate to teach it to all sorts of different groups and audiences. I have learned immensely from the very divergent ways in which people can make sense of what Marx is saying. This is, of course, a tribute to the rich complexity of the texts; that they can speak so directly to so many different people living in such radically different situations and coming from such radically different cultural and intellectual traditions. …

We all work from contexts even as we seek theoretical insights that might transcend those contexts. Marx is no exception. But then there are passages in the Grundrisse where Marx throws all contextual caution and constraints to the winds and speculates, sometimes wildly, as to the true essence and qualities of capital as a transcendent power. His insights are brilliant, dramatic and often astonishing in their implications. These form, as a student once commented to me, the jewels that shine with such luster in the mud of all too often turgid analysis. Finding and toying with these jewels of incisive understanding is what makes the study of the Grundrisse so extraordinary and worthwhile as well as, dare I say it, fun.

Now heading this year towards his 88th birthday and still teaching at the CUNY Graduate Center, writing texts, crossing theoretical swords (see, for example Rate and Mass and Reply to Riley on Rate and Mass) and attending conferences with his characteristic good cheer, bonhomie and modesty, David Harvey is the antidote to all those sickened by more austere and contemptuous aspects of academic Marxism and is an exemplar of vigour and hardiness (although he is terrible at replying to emails – so don’t take it personally!). Verso is proud to publish this book and to have republished his previous books with us in the Essential David Harvey series.

N.B. I cannot resist recycling this anecdote David told to Tariq Ali when announcing his new project on the Grundrisse: “Dear Tariq, I am told you are writing a book on Churchill and I am so delighted to hear this. I am so totally sick of his sanctification and deification by the political classes on this side of the Atlantic. Having a good critical book will be invaluable. I have a couple of anecdotes by the way which might amuse you. My grandma would only shop at the co-op and when I was 8 or 9 (in 1943-4) I often spent Saturdays with her. One time, we went somewhere to get her “divvy” and we ended up in some queue where she pontificated rather loudly to the effect that Churchill was a rotten bugger, enemy of the working people. I was banned from using such language at home, so I probably remember it because it was quite shocking to hear her going on in that vein in a public setting. Quite a few people were getting upset and defended him for leading the fight against Hitler to which my grandma replied that Hitler was a rotten bugger too and maybe it would take one rotten bugger to get rid of another rotten bugger but, after this war was over, we would get rid of all the rotten buggers, everyone of them. I told this anecdote to a colleague when at Oxford and he told me that, around the same time, he went to picture shows on Saturday mornings and they always showed Pathé News and, when a certain person was depicted, the whole audience would hiss and boo. He thought it was Hitler for a while, but it turned out to be Churchill…”

“David Harvey provoked a revolution in his field and has inspired a generation of radical intellectuals. Read this book.” – Naomi Klein 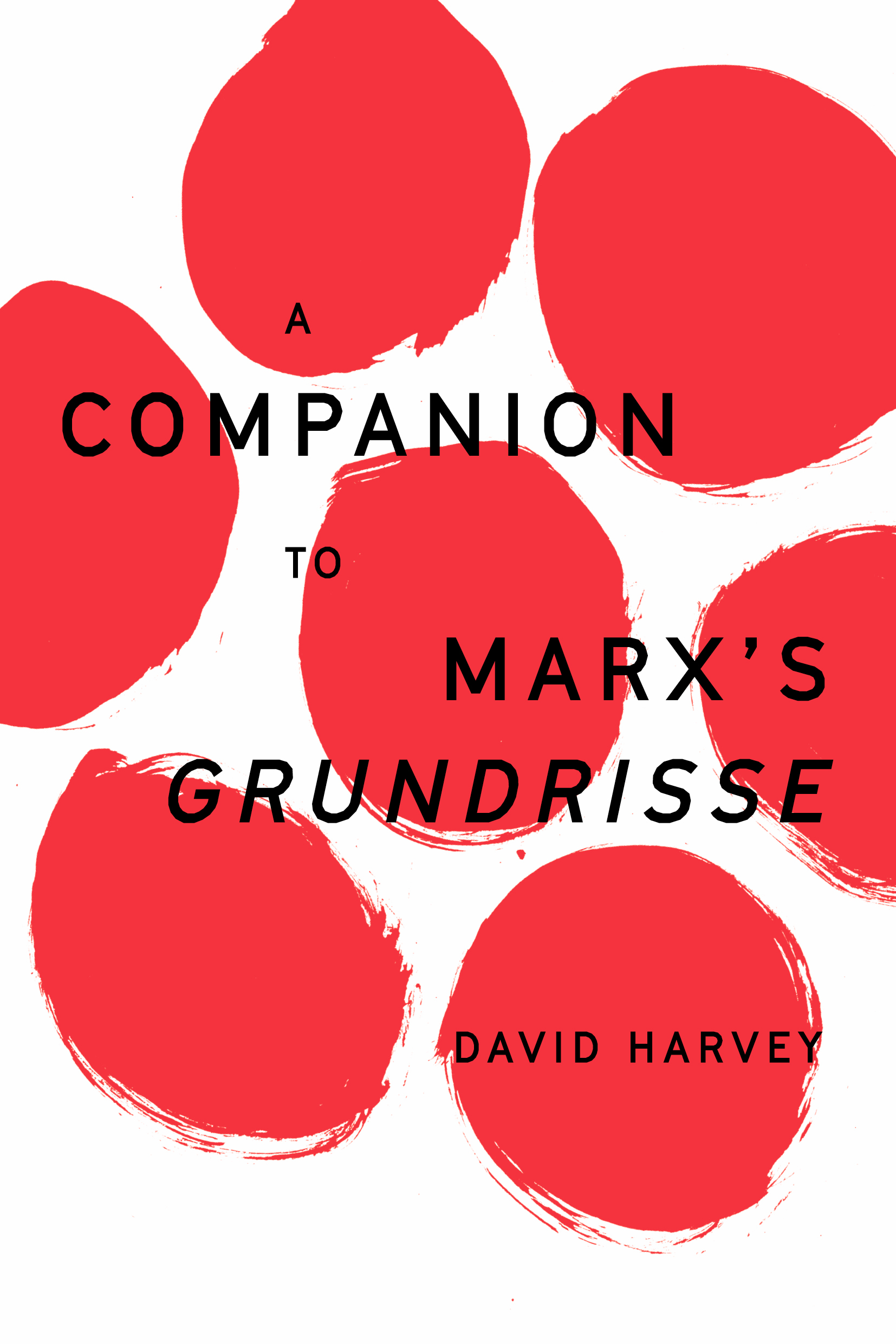 A Companion to Marx's Grundrisse
by David Harvey