“On the Politics of Indebtedness” with Richard Dienst

On Wednesday May 25th, The Bonds of Debt: Borrowing Against the Common Good was launched in New York with an event at Brecht Forum, where author Richard Dienst was joined by Jeremy Glick, Randy Martin and Bruce Robbins for a discussion entitled, "On the Politics of Indebtedness." Thanks to Richard Dienst for allowing us to make his opening remarks available here on the Verso blog.

It would be hard to speak at the Brecht Forum without invoking Brecht himself. You can get a good idea of what he thought about financiers in St. Joan of the Stockyards and especially The Threepenny Novel, but here I'd like to quote a very simple note on his crucial notion of "Eingreifendes Denken," or "interventionist thinking:"

It's an elementary dialectical lesson: one cannot offer a critique of the economic system without somehow fighting over the words we use, whether specialized and common-sensical, to talk about economic circumstances. So, alongside descriptions of how capitalism works and histories of its development and dead-ends, we need to keep "refunctioning" the very terms in which we try to get a grip on the situation in which we find ourselves.

This book [The Bonds of Debt] is an attempt to "refunction" the notions of debt and indebtedness. I'm not alone in arguing that indebtedness has achieved a special kind of universality and intensity in the current moment. Yet even though it's everywhere, it's hard to talk about debt, first of all because it's an ugly word and an uncomfortable notion: there's nothing inspiring about debt, except insofar as it inspires guilt or shame, that sinking feeling of being weighed down by obligations. That is why debt, which can never be a simple economic arrangement, is often treated in theological terms, as a kind of original sin, or, alternately, as Nietzsche does, as something grounded in the foundational crimes of human society.

I want to expand the range of meanings attached to these words, debt and indebtedness. I speak of different "regimes of indebtedness," different social configurations, each with their own history, in which something like debt is engaged and enforced. And I speak about indebtedness itself as a index of historicity, the torque of lived experience within social structures where the realm of necessity and the realm of freedom constantly push against each other.

In fact, I want to sharpen the contradictions around the concept of debt as far as possible:

—on one hand, it is an apparatus to capture and control all kinds of things that people do, regulating not only work and leisure, production and consumption, but education, health, citizenship, and our relationship to the environment. It calibrates more and more human activity to the logics of commodification and the temporalities of finance.

—on the other hand, indebtedness functions only because it constitutes a collectivity of some kind, and in principle, these collectivities are thereby enabled to undertake projects that would not be possible otherwise. When we look at the current configurations of indebtedness, we see not just indebted individuals or nations, but new alignments and variable aggregates of the indebted, corresponding to all kinds of productive circuits and tentative inventions. Indebtedness points to a conception of politics in which the minimum social unit is not one individual or group, but two, or rather, n+1. Even when debt is understood as fundamentally dyadic, and especially when such dyads are extremely unequal in power, it is important not to erase the multiple bonds between them. In other words: somehow we have to be able to recognize a kind of solidarity at work in the otherwise negative images of indebtedness.

Marx has a famous line about this, which spurred a lot of thinking in this book:

the only part of the so-called national wealth that actually enters into the collective possession of a modern nation is-the national debt. [Capital Volume 1, trans. Fowkes, 919]

So, to exaggerate a little, you could say that the triumphant capitalism of wealth is always accompanied by an accursed communism of debt. Or we might distinguish, using Randy Martin's terms, between the gang of risk-takers who are empowered by credit, and the vast populations at risk, endangered by debt. We would have to fine-tune this picture to account for the shifting contours of the global economy, and in the first chapter I try to work through the details of three major radical accounts of recent history, by Robert Brenner, Giovanni Arrighi, and David Harvey. There are important differences between them, and there are ongoing discussion on the left that revise and challenge their different conclusions. What interests me in all of them, however, is the way the key problems said to be facing contemporary capitalism—waning profitability, overconsumption, hegemonic crisis, and contestation over social provision-all revolve around the construction of a regime of indebtedness capable of sustaining the processes of accumulation and forestalling (perhaps) systemic crisis.

I think that this regime encompasses something more than "financialization," although that term designates an important component of it. For me, "indebtedness" names both the economic mechanisms of "dispossession" and the irreplaceable relationships of reciprocity upon which all social life depends. Neither strictly economic nor anthropological, let alone theological or psychological, indebtedness is the material condition of everybody living in the multiple worlds of capitalism. We would need to construct a kind of meteorological map, showing the shifting fronts between internal and external debts, concentrated in some places and dispersed in others, a whole planet-full of more or less conscious, more-or-less contested modes of being indebted.

How does this rather multiple and perhaps contradictory concept help us to think about the current situation? I think it helps to clarify the stakes of current efforts to start a new round of accumulation and to reinvent the policies of impoverishment and inequality that have prevailed over the past few decades.

In the first place, we have often heard that the left has failed to rally new forces to challenge capitalism in the wake of the 2007-08 financial crisis, and that only the Right has gained any traction in denouncing, however dishonestly, the current set-up. The mainstream political debate still rages between stimulus and austerity, between born-again Keynesians and monetarist fundamentalists. Both options leave the current regime of indebtedness intact, whether using public funds to save private institutions or invoking fiscal constraint to continue dismantling collective obligations, now denounced as "entitlements." The system want to make us believe that the current organization of debts must be obeyed, in order to rein in the wrong kind of debts and unleash the right ones. The rhetoric is designed to appeal to a certain mood of prudence and stoicism, coupled with a fear of that profligate neighbors are just as threatening as overseas competitors. The bank bailouts and IMF rescue schemes can just barely be tolerated on both sides, on the grounds that they might fix the system just long enough for the bad debts to be washed away and the new austerity measures to kick in.

What the Left has so far failed to do, then, is to make the decisions around surplus and austerity a matter of public contestation and an occasion for redefining democratic control of the economic system. This failure has so total, that I think we should be asking whether there is something wrong with our expectations. As T.J. Clark recently put it, "If the past decade isn't proof that there are no circumstances capable of reviving the Left in its 19th and 20th century form, then what would proof be like?" (At the conference "The Luddites without Condescension," Birkbeck, University of London; podcast available here.)

But it's not true that there has been no answer from the Left: it's just that it has so far taken the forms of scattered eruptions, spontaneous breakdowns and mute shock that have yet to coalesce into something more cohesive. Whether or not one wants to see the waves of mass protest in Europe, and the student protests around the world, as harbingers of a new radical sequence—perhaps resonating with, however opportunistically, movements for radical change elsewhere in the world—it seems clear that the coming politics requires a confrontation with the current regime of indebtedness and the staggeringly massive and uneven accumulations of wealth that it supports. Sooner or later, bond holders and ratings agencies are going to have to stop pretending that the world is organized according to their conception of the common good. There are devaluations, defaults, and fundamental renegotiations on the horizon, and the Left may rediscover itself precisely at the point when an insolvent social order asks itself whether it deserves a future anymore.

In the here and now, it would seem the Left has two divergent strategies to pursue: on one hand, to constitute a polity of debtors capable of making demands upon the state; on the other hand, to encourage withdrawals from the mechanisms of state provision. The first approach could be aimed at something more than patching up the safety net: it would require a manifold conception of solidarity and generosity, aimed at pulling together all of those who have been stranded together by the receding tides of development. The second approach would throw off the machinery of compromise and the hope of rescue from a higher power altogether, and pursue instead various forms of self-reliance, sometimes openly antagonistic to, and sometimes merely incompatible with, the ruling system.

Such prospects allow for a great many permutations, usually tagged with Marxist or anarchist, reformist or revolutionary labels. But in terms of the present argument, I want to offer you a thought experiment, drawn from the conclusion to the book. It is a choice between competing Utopian "solutions" to the problem of indebtedness. The first option would look at the subprime debacle, the predatory behavior of banks, and, more generally, the prospect of whole populations "too poor for debt," and conclude, like Mohammend Yunus of the Grameen Bank, that credit is a basic human right. In a comprehensive microcredit system, the banking and insurance industries would be replaced by community-based councils and internet lending circles, designed to ensure that everyone has access to the financial resources necessary to have a good life and contribute to the common thriving of all. What kind of micro-market macro-ecological climate might evolves under the protective umbrella of such schemes? We can only guess, although some would say (like Juliet Schor in her book Plenitude) that the rudiments of an alternate economy are already growing. The second Utopian option would take the form of Jubilee—a revolution, really, like a general refusal of the indebted—that would inaugurate a different conception of social obligation altogether, one that is engaged in a kind of permanent revolution against the institutions of indebtedness. From such a perspective, it is not debt (as a financial resource) that needs to be diffused and disseminated, but the notion of debt itself: in its place we would need to develop an array of responsibilities, self-limitations, and reciprocities that correspond more closely to the complex social relationships upon which we depend.

I offer these alternative Utopias without being able to choose between them. But I hope that you will hear in each one the pressing question: what do we owe one another? And: who is this "we" that we owe it to ourselves to become?

To read more, pick up a copy of The Bonds of Debt. 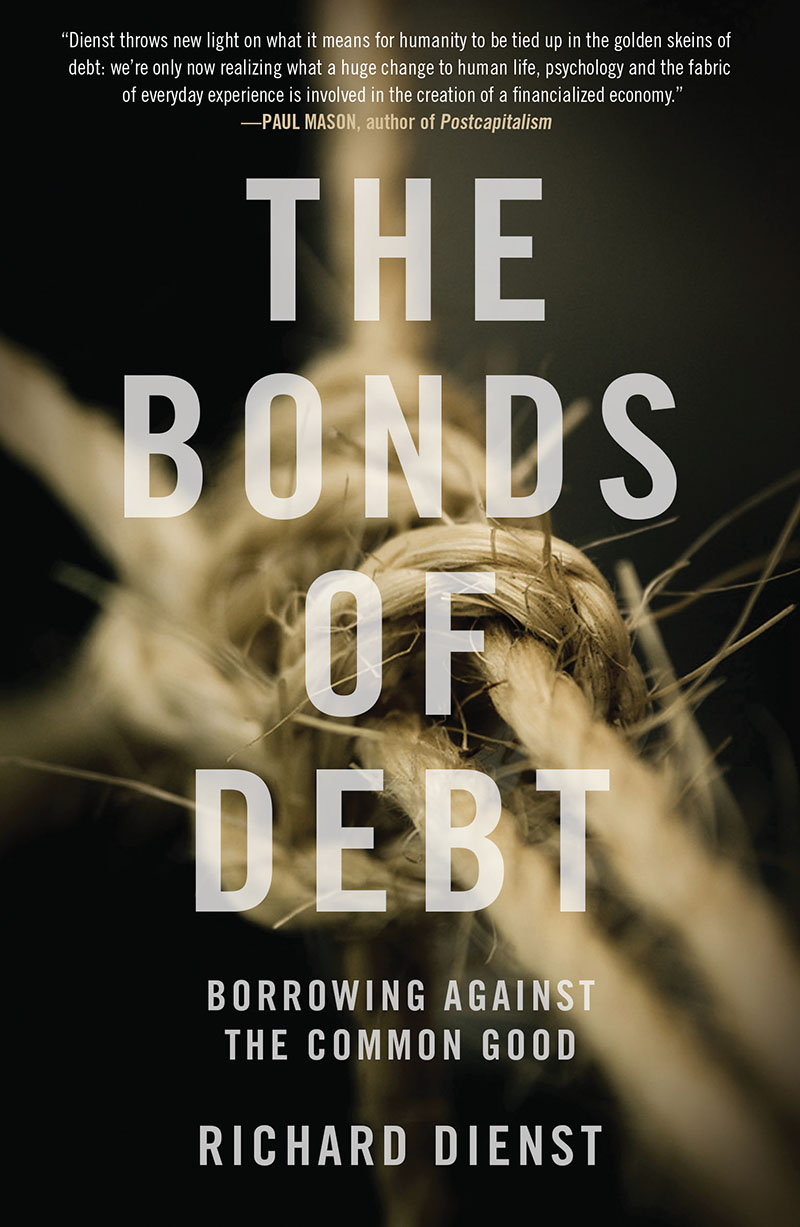