If her mind could be characterised it would be by a phrase something along the lines of: a fierce vigilance of thought.

This is how Nicholas Lezard, columnist and literary critic at the Guardian, describes the philosopher and sociologist Gillian Rose. In his recent review of Love's Work, Lezard reminds us of Rose’s determination and richness of thought, which characterise both her work and her life. Unapologetically blending prose with theory, Love's Work is an unconventional memoir that takes us through Rose’s love affairs, family relations and her brave fight against cancer.

"Love" and "life" are for Rose almost interchangeable words; we read the phrase "life affair" more than once. And for those who have suffered for and in love, this may prove to be one of the most useful books they will ever read.

Although an established academic –she was trained in Oxford, where she gained her PhD studying Adorno’s work- Rose’s independence and interdisciplinary approach put her at odds with the establishment. Her belief in reading philosophy through the teachings of history and her uncompromising research interests forced her to move from Sussex to the University of Warwick, where she worked until her death in 1995.

Caught between history and philosophy, Rose turned to Hegel’s dialectics as a way to understand the fundamental connections between life and theory. In perhaps her most influential book, Hegel contra Sociology, she engages with the contemporary dilemmas of Marxism and prescribes a dose of Hegel’s speculative discourse as an antidote to ossified sociological practices.

See Lezard’s article at the Guardian for the complete review of Love's Work and Hegel contra Sociology, part of our Radical Thinkers Series, for the theoretical foundations behind Gillian Rose's philosophy. 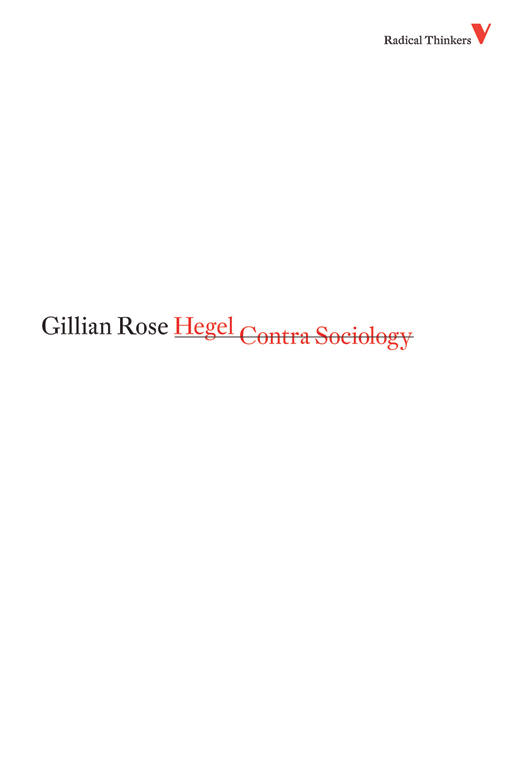