Idea of Communism—Resources and commentary

Following on from our announcement of Alain Badiou and Slavoj Žižek's New York conference, Communism, A New Beginning?, we have brought together the numerous reports, responses, commentary and resources relating to the first Idea of Communism conference in London.

If there's anything missing, please add in the comments below.

Do not be afraid, join us, come back! You've had your anti-communist fun, and you are pardoned for it—time to get serious once again!

Bob Diamond, Chief Executive of Barclays recently spoke of how "the time for remorse and apology for banks now needs to be over," mostly to a reaction of disbelief. A mere three years after causing the current financial crisis should the banks be forgiven and capitalism return to being beyond criticism? Some of the most influential intellectuals are asking, if so, is it not time to stop apologising for the brutalities done in the name of communism, and instead return to the idea of communism? In a quote from Michael Hardt's essay, appearing in The Idea of Communism, he states:

Many central concepts of our political vocabulary, including communism as well as democracy and freedom, have been so corrupted that they are almost unusable. In standard usage, in fact, communism has come to mean its opposite, that is, total state control of economic and social life. We could abandon these terms and invent new ones, of course, but we would leave behind too the long history of struggles, dreams and aspirations that are tied to them. I think it is better to fight over the concepts themselves in order to restore or renew their meaning.

Visit the Guardian to read an extract from the essay.

The crisis of capitalism in 2008 has seen stalwarts of left thinking moved out of the universities and back to central stage. More than ever they are being looked at to offer an alternative to capitalist realism—the elites are ferociously re-reading Marx in an attempt to understand the crisis and Fukuyama's idea of the valiant capitalist triumphant at the "end of history" is continually derided.

It is within this context that when lecturers at Birkbeck College in 2008 began to organise a conference on 'The Idea of Communism,' partially in response to Alain Badiou's The Communist Hypothesis, their estimates of 200 academic attendees were soon having to be drastically re-considered as they became inundated with registrations, eventually seeing over 1,200 people spilling over into rooms with live-video feed. Major international newspapers such as the Guardian picked up the story, identifying that "the international financial crisis has led to a resurgence of interest in a philosophy that many claimed had been buried with the collapse of the Soviet Union." While Der Spiegel offered a rather more po-faced feature focusing on "the big three:" Žižek, Negri and Badiou—though does recognise "exactly 21 months after the near—collapse of the capitalist status quo, there is apparently a new yearning-not for leftist policy, but for leftist theory."

The idea for a frank, public debate on a reclaiming of the name communism came from Badiou in a short treatise for New Left Review. It touches on key subjects explored in The Meaning of Sarkozy, Polemics, The Communist Hypothesis and his essay for The Idea of Communism. Badiou's hypothesis outlines a distinct break from the communism and radical left of the past:

Between the end of the first sequence and the beginning of the second there was a forty-year interval during which the communist hypothesis was declared to be untenable: the decades from 1871 to 1914 saw imperialism triumphant across the globe. Since the second sequence came to an end in the 1970s we have been in another such interval, with the adversary in the ascendant once more. What is at stake in these circumstances is the eventual opening of a new sequence of the communist hypothesis. But it is clear that this will not be—cannot be—the continuation of the second one. Marxism, the workers' movement, mass democracy, Leninism, the party of the proletariat, the socialist state—all the inventions of the 20th century—are not really useful to us any more. At the theoretical level they certainly deserve further study and consideration; but at the level of practical politics they have become unworkable. The second sequence is over and it is pointless to try to restore it.

The responses and discussions sparked from Badiou's thinking were as diverse as the speakers themselves (though not as some pointed out in gender or nationality).

From the conference itself you can watch footage of Badiou, Žižek, Rancière and others on YouTube or listen to a selection of the lectures individually. Peter Hallward's 'Communism of the Intellect, Communism of the Will'and Bruno Bosteels' 'The Leftist Hypothesis: Communism in the Age of Terror'can both be listened to at Counterrealism.

Hardt's 'The Production of the Common,' the welcome from Costas Douzinas and Alain Badiou's introductory remarks can all be listened to at Daily Motion.

Alternatively, Counterrealism have the entire conference to listen to in 3 manageable chunks.

You can also read Alberto Toscano's paper, 'Communist Knowledge/Communist Power,'which looks at "what it might mean to be a communist in philosophy, and whether the idea of communism is indeed a philosophical idea" and "the need to define how philosophy was caught up in the very emergence of the idea of communism, and in what manner communism developed both from and against philosophy."

The specificity of communism stems from its intrinsic and specific temporality, from the fact that, while never simply non- or anti-philosophical, it is an idea that contains within it, inextricably, a tension towards realisation, transition, revolution.

Peter Hallward's 'The Will of the People; Towards a Dialectical Voluntarism' focuses on popular will and voluntary collective action, summing up the current attitudes to "the masses" thus:

In spite of all that has changed over the past two hundred years, the alternative remains much the same: either an insistence on the primacy of popular self-determination, or a presumption that the people are too crude, barbaric or childlike to be capable of exercising a rational and deliberate will.

Visit Radical Philosophy to read the full piece—an expanded version appears in The Idea of Communism.

For those who speak French, a full version of Rancière's discussion'Communists without Communism?' which looks at the relation between the communist hypothesis and the hypothesis of emancipation, can be watched at the European Graduate School website.

Costas Douzinas focuses his expertise in the field of law to look at a communist approach to human rights, and his essay poses the question "If communist practice was a denial of liberal rights, can the philosophical idea of communism save (human) rights?"

Universalism is the rallying cry of liberal humanitarians. The defence of the sans papiers, a major campaign of Badiou's organization politique, cannot avoid some version of rights-talk. Hardt and Negri's recipe for turning the claims of empire's into radical multitude's expression takes the form of social rights. Jacques Rancière finds in human rights a good example of the radical politics he espouses. An embarrassed flirtation between the left and rights has been renewed in a direction which combines the defence of universalism with the rejection of human rights ideology. This is the time to re-visit rights history and theory in the context of late capitalism.

Jean-Luc Nancy's 'Communism, the word' charts the history and developing historical meaning of the word 'communism' and hints at how it has emerged again in the wake of the financial crash. His notes for the conference are published in full in The Idea of Communism.

Visit Lacan.com to read the full article, or Backdoor Broadcasting to for an audio version.

There are plenty of discussions, notes and reports of the actual event such as Nina Power's and the Commune which calls for more discussion of practical applications.

As Rancière himself argued, communism is not some dream you cling on to like a religion, but a mode of societal organisation which can only [be] brought about by the concrete activity of real human beings.

Pinocchio Theory follows a similar tack, the N+1 blog offers a lengthy reflection and Total Assault on Culture has uploaded his notes from the conference. Radical Philosophy also filed a report from the event entitled 'Celebrity come Communism' which summed up the beginnings of the conference succinctly:

This conference's political conditions had been staked out in advance, on behalf of all the speakers, by Alain Badiou's essay 'The Communist Hypothesis'. These were the collapse of the Old Left of the Communist Party and state, and the demise of the social-democratic project. The financial crisis that has since intervened featured as an additional element and a frequent point of reference for speakers and audience.

Visit Radical Philosophy to read the article in full.

While Mark Fisher (aka K-Punk) wrote a review of the event for Frieze, stating:

More than one speaker warned that it will take more than the crisis to undermine capitalism. As Slavoj Žižek rightly insisted, the dominant narrative of the crisis—whereby the excesses of particular capitalists are blamed, rather than the capitalist system itself—will only enable people to continue to sleep in the guise of waking up. Is it time for a return to communism? And, if so, to which idea of communism must we turn?

Visit Frieze to read the article in full.

An analysis comes from Nathan Coombs in a comment on Lacan.com in which he too identifies the differences between groups of the speakers before discussing each groups individual contributions.

Logical Regression offered a critique before the conference even began, along with this prophetic cartoon imagining Žižek's dominance over proceedings: 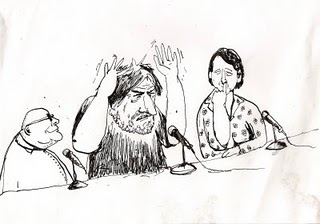 Mute too filed an extensive and insightful report, discussing again the arching theme of communist philosophy versus communist actuality:

Something immediately striking on reflection is that, in spite of the opening remarks and the stated aims of the conference which tried to distinguish between communism as politics and as philosophy, so much attention was devoted to this relationship. There turned out to be much less consensus than originally implied.

Visit Metamute to read the article in full.

This specific relationship between theory and action and many of the other subjects raised at the conference and in the subsequent debates have been followed through and expanded upon elsewhere. Žižek expands on his lecture in the five part masterclass 'Notes Towards a Definition of Communist Culture' which you can listen to in full at Backdoor Broadcasting. Badiou has written on the re-appropriation of the idea and word 'communism' in his article 'Is the word communism forever doomed?'

Communism in fact is a heuristic hypothesis frequently used in politics even if the word does not appear.

Visit Lacan.com to read the article in full.

Jacques Rancière too in his piece 'From the actuality of communism to its inactuality' puts forward this same notion, and addresses the balance between the philosophical idea and the reality of its application.

Firstly communism is not an ideal. It is an actual form of life. While democracy means freedom and equality only represented in the separate form of law and state, communism is their sensory reality, embedded in the forms of an existing common world.

Visit After 1968 to read the article in full.

And lastly Bruno Bosteels, the rising star of American cultural theory, has expanded on his essay and the discourses initiated at the conference, collected in the latest addition to the Verso Communist Hypothesis series. The Actuality of Communism discusses the recent resurgence in communist thought and discusses its key subjects—the masses, class, state, etc—in real, applicable terms.

(Thanks to Pete Willis for collating and writing up.)