In May 1969—forty-two years before Zucotti Park was occupied—People's Park in Berkeley, CA became the scene of a major standoff between student protesters and the police. Two years earlier, the University of California had acquired the site through eminent domain, then abandoned plans to build a student parking lot and playing field when funds ran dry. Seeing an opportunity to create public space, local residents, merchants and activists occupied the site (against the wishes of the university) and built the park that stands today. The police, called in by Governor Ronald Reagan (who saw this as a challenge to the university's property rights), fatally shot one bystander and blinded another. May 15, 1969 is now known as "Bloody Thursday."

Frank Bardacke, a leader of the People's Park occupation, wrote this call to defend the park in 1969. He will be at the Brecht Forum in New York on November 10 to speak about his new book, Trampling Out the Vintage. On November 12, he will be at Zucotti Park, celebrating the two occupations. 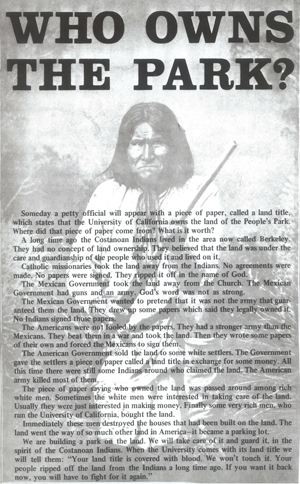 Someday a petty official will appear with a piece of paper, called a land title, which states that the University of California owns the land of the People's Park. Where did that piece of paper come from? What is it worth?

A long time ago the Costanoan Indians lived in the area now called Berkeley. They had no concept of land ownership. They believed that the land was under the care and guardianship of the people who used it and lived on it.

Catholic missionaries took the land away from the Indians. No agreements were made. No papers were signed. They ripped it off in the name of God.

The Mexican Government took the land away from the Church. The Mexican government had guns and an army. God's word was not as strong.

The Mexican Government wanted to pretend that it was not the army that guaranteed them the land. They drew up some papers which said they legally owned it. No Indians signed those papers.

The Americans were not fooled by the papers. They had a stronger army than the Mexicans. They beat them in a war and took the land. Then they wrote some papers of their own and forced the Mexicans to sign them.

The American Government sold the land to some white settlers. The Government gave the settlers a piece of paper called a land title in exchange for some money. All this time there were still some Indians around who claimed the land. The American army killed most of them.

The piece of paper saying who owned the land was passed around among rich white men.

Sometimes the white men were interested in taking care of the land. Usually they were just interested in making money. Finally some very rich men, who run the University of California, bought the land.

Immediately these men destroyed the houses that had been built on the land. The land went the way of so much other land in America—it became a parking lot.

We are building a park on the land. We will take care of it and guard it, in the spirit of the Costanoan Indians. When the University comes with its land title we will tell them: "Your land title is covered with blood. We won't touch it. Your people ripped off the land from the Indians a long time ago. If you want it back now, you will have to fight for it again."