Keith Gessen describes his arrest, and the lack of bathrooms in jail

On the morning of Occupy Wall Street's second month anniversary, several of the editors of Occupy!: Scenes from Occupied America were arrested as they practiced non-violent disobedience in front of the Wall Street police barricades. One of them was Keith Gessen, who spent thirty-six hours in jail—sitting on the floor, singing "Bohemian Rhapsody," eating Corn Flakes, and explaining to a drug dealer that he was richer than most Americans because he had no debt.

Also, thirty-six hours of holding it in. The toilet was filthy, he writes in the New Yorker, and covered in piss. Read his account here.

Watch out for events in NYC over the next few weeks with the editors and writers of Occupy!, along with movement participants and allies. In fact, a discussion panel at Housing Works on November 7—moderated by Keith Gessen, and including editors Astra Taylor and Sarah Resnick, along with Mark Levinson, Liza Featherstone, Meaghan Linnick and myself—wound up being Housing Works' most well-attended event of the season. 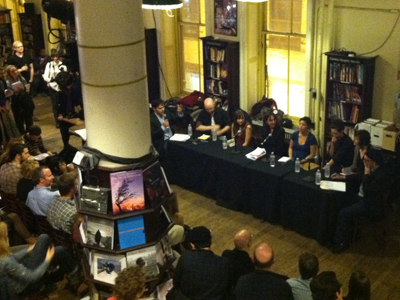 Occupy! features the editors and writers of the celebrated n+1 magazine, as well as some of the world’s leading radical thinkers, such as Slavoj Žižek, Angela Davis, and Rebecca Solnit.