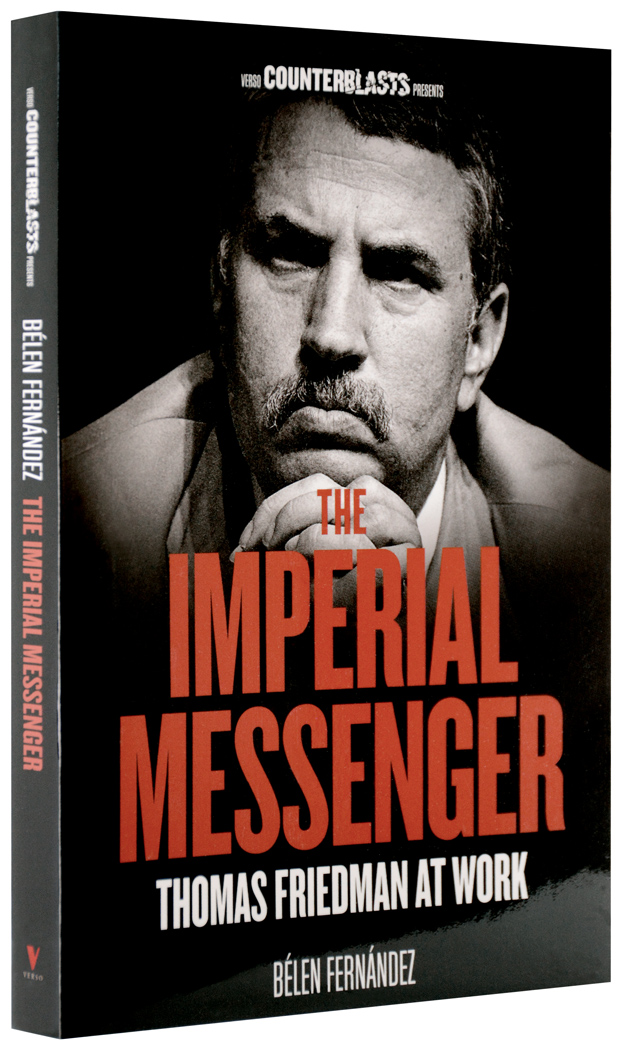 The Imperial Messenger reveals the true value of this media darling, a risible writer whose success tells us much about the failures of contemporary journalism. Belén Fernández dissects the Friedman corpus with wit and journalistic savvy to expose newsroom practices that favor macho rhetoric over serious inquiry, a pacified readership over an empowered one, and reductionist analysis over integrity.

The Imperial Messenger is polemic at its best, relentless in its attack on this apologist for American empire and passionate in its commitment to justice.

“Filleting the silliest man on the planet needs a sure scalpel, and Belén Fernández wields hers with deadly finesse.”

“A long overdue takedown of a dangerous fraud. Fernández deserves great credit for having the stomach to digest all of Friedman’s oeuvre and for her witty, fact-based and ruthless deconstruction of all his contradictions, incoherence, jingoism and inane aphorisms. You read it and you are amazed how a clown could rise to such dominance in American culture and how such drivel could pass for insight, and what that implies about us. The book is a vaccination that should be given to all college freshmen lest they too get infected, an antidote for those suffering from admiration of Friedman and a palliative remedy for those of us who have had aneurysms in reaction to his every latest bloviation.”

– Nir Rosen, author of Aftermath: Following the Bloodshed of America’s Wars in the Muslim World

“Via razor sharp analysis and meticulous research, Fernández reveals the consistently disastrous effects of the neoliberal policies Friedman cheerleads. The hubris, fallacy, consistent hypocrisy, and buffoonery of the New York Times' most widely read columnist is systematically deconstructed and laid bare. A must read.”

– Dahr Jamail, journalist and author of Beyond the Green Zone: Dispatches from an Unembedded Journalist in Occupied Iraq

“Belén Fernández is a revelation to those who don't know her yet and a confirmation for those happy few who have known her sublime sense of political satire—subdued, innocent, piercing, frightful. She is a political satirist of the generation X vintage—low-key, self-effacing, happenstance, ‘what-ever’-type who crawls under your skin and begins to tickle and before you know it bite. She insinuates so effortlessly, you think she is just chilling—she is not. Her book on Thomas Friedman is an act of restitution, a declaration of independence from a young, idealist, brave, and defiant generation of Americans who have had it up to here with barefaced banality that has been fed to them for too long. She is talking back—boldly, patiently, chapter and verse, going in for the kill.”

– Hamid Dabashi, author of Iran, the Green Movement and the USA: The Fox and the Paradox

“Thomas Friedman is a representative for the peculiar, yet self-serving nature of American political, business and media elites. His patronizing, over-simplified (often self-deceiving) style came to define him, as a person, but also an entire era of patronizing, hegemonic and often bloody American foreign policy in the Middle East and the rest of the world. The Imperial Messenger is a superb dissection of the character of Friedman, and all the representations he snootily imitates. Belén Fernández’s style is witty and unique, and her book is the antithesis of Friedman’s various attempts at logic.”

– Ramzi Baroud, author of My Father Was a Freedom Fighter: Gaza's Untold Story

“Fernández skewers empire’s messenger Tom Friedman. . . .Few books on current affairs merit being called page-turners; because of Fernández’s witty and punchy style, this one does.”

“[A] meticulously researched book, written with wry wit and an unrelenting critical eye, that should be read by both Friedman's fans and critics alike; not just for what it reveals about his journalism or the New York Times, but for what it says about the state of American journalism as a whole. In short, if New York's 'paper of record' wanted to start rectifying its own journalistic deficiencies, it would do well to start by replacing Friedman with Fernández.”

“There is no wittier or sharper account of Thomas Friedman’s intellectual and moral atrocities than Belen Fernández’s The Imperial Messenger.”

“[C]arefully argued, relentlessly well-written polemic...there is something compellingly honest about Fernández’s attention to the material context within which Friedman’s ideas find succor.”

“[R]aises thought-provoking questions about the objectivity of mainstream media when it comes to US economic and foreign policy interests.”

“[S]hould be the companion volume to any and all reading of Friedman.”

“Journalist Belén Fernández’s new opus Imperial Messenger effectively eviscerating the NYT’s Thomas Friedman (whom Alexander Cockburn, not one to pull punches, has called “the silliest man on the planet”) strikes me as an example of the kind of book that a supine establishment,mainstream media herd must exert some effort to avoid paying even minimal attention.”

– Robert Birnbaum, Our Man in Boston

“Fernández subjects Friedman to careful scrutiny and assigns him failing grades for logic, consistency, and integrity. After reading Fernández dissect Friedman column by column, the unavoidable question is: How did Friedman ever pass himself off as a journalist? Why isn’t Belén Fernández the New York Times' lead columnist? The answer is clear. Fernandez won’t lie for the establishment.”

“[A] systematic, detailed take-down of the neo-liberal bias, myopic US-Israeli chauvinism, and general intellectual shallowness that almost scream to be noticed in Friedman’s writing. Throughout, [Fernández] bolsters her arguments with detail so profuse and tightly packed that a brief review such as this can hardly do it justice. Deserves to be read widely and discussed in depth. After doing so, one may be much less prepared to say the same for the work of Thomas Friedman.”

“Those searching for a more thorough and academic destruction of Friedman's career and philosophy would enjoy The Imperial Messenger, an incisive dismantling of the man and his message.”

The annual Verso prize for Cultural and Critical Studies is awarded to the top student graduating from Birkbeck’s MA Cultural and Critical Studies. This year, the prize goes to student Elle Aspell-Sheppard for her excellent project on “post-truth” and its effects on politics, using the specific example of Donald Trump’s electoral campaign. The external examiner described the essay as a “beautifully written piece of work, which brings Hannah Arendt’s thought successfully into the present moment…a thoughtful argument is advanced around the idea of post-truth as a contemporary keyword”. Speaking is an extract from the winning dissertation.