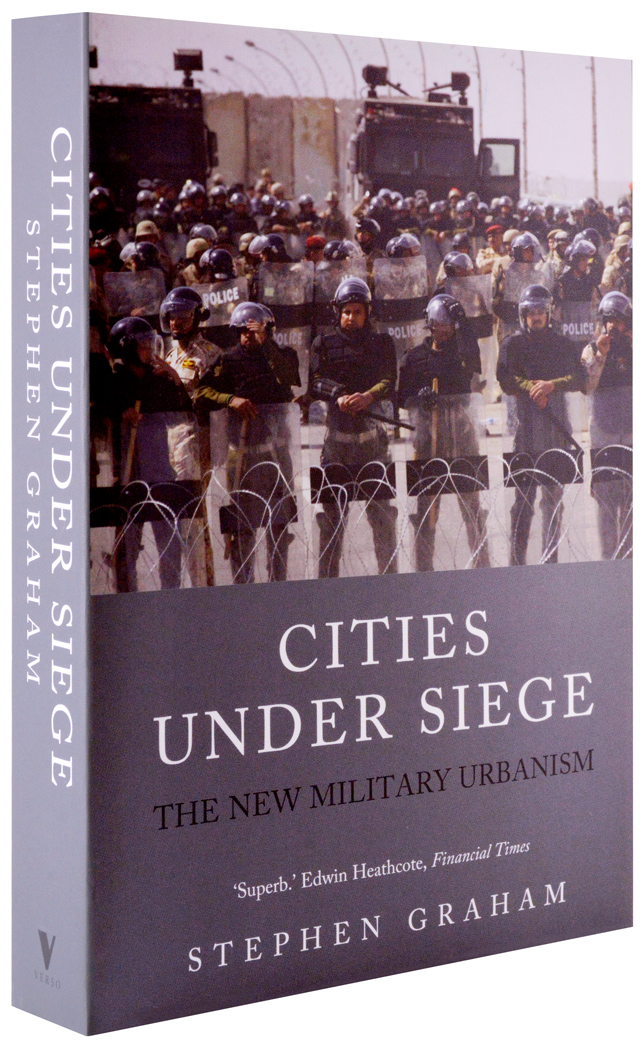 A powerful exposé of how political violence operates through the spaces of urban life.
Cities are the new battleground of our increasingly urban world. From the slums of the global South to the wealthy financial centers of the West, Cities Under Siege traces the spread of political violence through the sites, spaces, infrastructure and symbols of the world’s rapidly expanding metropolitan areas.

Drawing on a wealth of original research, Stephen Graham shows how Western militaries and security forces now perceive all urban terrain as a conflict zone inhabited by lurking shadow enemies. Urban inhabitants have become targets that need to be continually tracked, scanned and controlled. Graham examines the transformation of Western armies into high-tech urban counter-insurgency forces. He looks at the militarization and surveillance of international borders, the use of ‘security’ concerns to suppress democratic dissent, and the enacting of legislation to suspend civilian law. In doing so, he reveals how the New Military Urbanism permeates the entire fabric of urban life, from subway and transport networks hardwired with high-tech ‘command and control’ systems to the insidious militarization of a popular culture corrupted by the all-pervasive discourse of ‘terrorism.’

“Look, you're just going to have to read this book...after a while you begin to wonder whether books like this will be allowed to be published for much longer.”

“Superb ... Graham builds on the writings of Mike Davis and Naomi Klein who have attempted to expose the hidden corporate and military structures behind everyday life.”

“A rigorously researched, pioneering book packed with disturbing and at times astonishing information.”

“Sharp, lucid and elegant prose ...Graham is consistently insightful and compelling. Cities Under Siege is an indispensable analysis of the dark fantasies that the military imagination is seeking to realise in the coming century.”

“Roll over Jane Jacobs: here’s urban geography as it looks like through the eye of a Predator at 25,000 feet. A fundamental and very scary report from the global red zone.”

“Cities Under Siege is a detailed and intense forensics of new urban frontiers, laboratories of the extreme where experiments with new urban conditions are currently being undertaken. In this fascinating new work Steven Graham has created a novel concept of the city, looking at war as the limit condition of urbanity and calling for an alternative urban life yet to come.”

“A brilliant critique of the deadly embrace of military violence and contemporary urbanism. Steve Graham writes with immense power and lucidity, layering detail over detail and image over image to expose the shadows that are falling across cities around the world. This is not a dystopian future but the present, and Graham compels us to open our eyes to the dangers military urbanism poses to contemporary democracy.”

– Derek Gregory, Professor of Geography, University of British Columbia and author of The Colonial Present

“An enlightening overview of the security state's impact on contemporary cities, from overt authoritarian control in war-torn areas to more subtle forms of behavioral influence in places supposedly at peace. Graham shows how military/police/security forces perceive urban places and urban dwellers as subjects to control, and how their inherently undemocratic tactics threaten freedom all over the world.”

New issue of The Funambulist is out now!

The latest issue of The Funambulist, Racialized Incarceration, is out now.