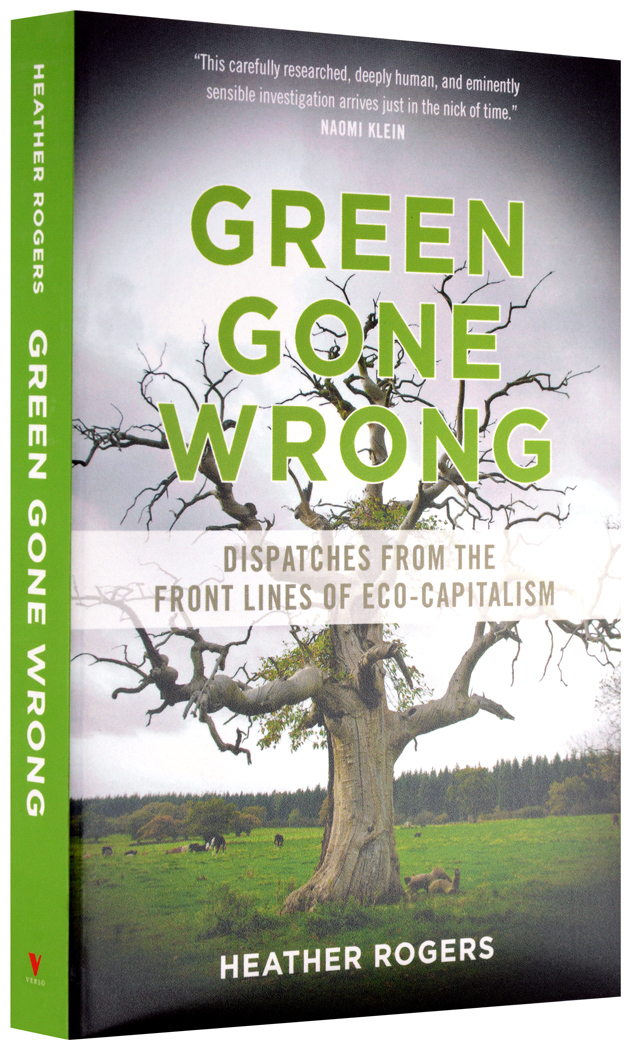 Trenchant exposé of the myths of “green capitalism”.

A new afterword considers various ways in which national development might be freed from its dependence on economic growth, allowing for a decent standard of living without exhausting the planet’s resources.

“[An] excellent anatomy of greenwashing in corporate culture and personal life.”

“The climate crisis is far too urgent to squander another decade on false solutions. This carefully researched, deeply human, and eminently sensible investigation arrives just in the nick of time. Let's hope it inspires a radical course correction.”

“Heather Rogers offers a compelling commentary on the state of our contemporary civilisation.”

“Our livelihood is in conflict with our planet. Heather Rogers paints a vivid picture of the crisis to come unless we fundamentally change what and how much we consume. Green Gone Wrong is a book of hope because it tells us what is necessary – not what we want to hear.”

“Heather Rogers reminds us with vivid examples that there's no way we can just subcontract our environmental conscience to the new breed of green marketers. We have a very narrow window to preserve some version of our planet, and we can't afford the kind of egregious mistakes this volume identifies with such precision. If it's too good to be true, it's not true--even if it comes with a shiny green wrapper.”

“With deft and adventuresome reporting from around the world, Heather Rogers looks beneath the surface of today’s market-based “solutions” to our environmental challenges and skillfully distinguishes between reality and illusion. Business as usual won’t do, Rogers tells us, no matter how much we green it.”

– Annie Leonard, author of The Story of Stuff

“Heather Rogers brilliantly and lethally exposes "green" capitalism for the chicanery that it is. While it may be disappointing to find out that "organic" and even "fair trade" don't mean squat - not to mention, of course, "carbon offsetting," which turns out to be even stupider than it sounds - these pages make clear what the answer is: stop making colorful excuses for the system that's driving us off the cliff, and instead make shifts in our economic priorities to bring about real change. May Rogers's book guide our feet.”

“Green Gone Wrong doesn’t just go after easy targets like big corporations … Rogers offers plenty of evidence that consumers who load up their shopping carts with organic food, for instance, may be unwittingly subsidizing big farm companies that are eradicating forests and defiling the soil in some developing countries.”

“By going beyond exposé to analysis, Rogers gives a deeper assessment of environmental problems and solutions than the usual global-warming investigative book.”

“Rogers “exposes how the “green” movement is failing to live up to the promise of sustainability and stewardship of the environment when the solutions are hijacked by economic and political interests. [Her] clear-headed approach proves effective in uncovering the truths behind the mantle of greenwashing.”

“A compelling critique that exposes the inability of big business to provide sustainable energy.”

“This book is a detailed critique of how the market is failing to tackle climate change…this is an essential tool for arguments against market solution to not only climate change but also social inequality.”

“Heather Rogers ... makes a convincing argument that, as most of us have probably already suspected, we can’t simply buy our way out of the crisis that our planet is experiencing.”

“Readers will be troubled by the laundry list of fallacies at the heart of ‘green business,’ but the book’s final chapter, which discusses developing and very positive alternatives, will keep them from despairing.”

“An entertaining and personal story...Through every crisis an opportunity arises and this book argues against apathy in the struggle for a more sustainable world and for open debates about what society we want to create to live in. It is a fascinating read in an under-researched area.”

The Global Climate Crisis and Capitalism: A Reading List

Socialism or Whole Foods: Luxemburgian Answers to Our Climate Crisis

Leftists need to counter the vision of ever-more-consumption, upon which capitalism depends, with a different account of what constitutes quality of life.