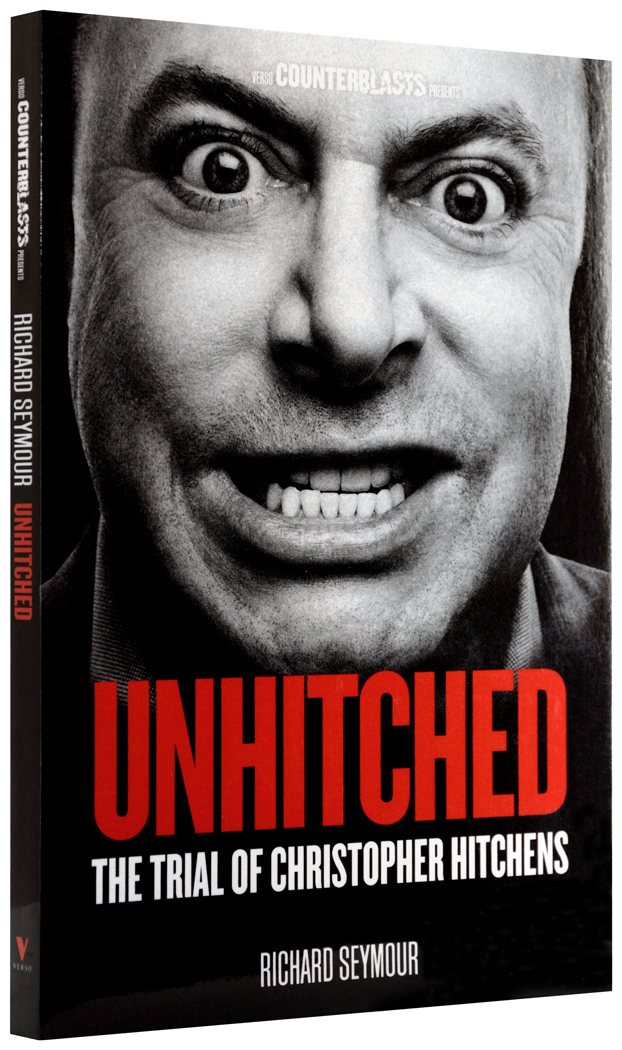 Blistering and timely interrogation of the politics and motives of an infamous ex-leftist.

Irascible and forthright, Christopher Hitchens stood out as a man determined to do just that. In his younger years, a career-minded socialist, he emerged from the smoke of 9/11 a neoconservative “Marxist,” an advocate of America’s invasion of Iraq filled with passionate intensity. Throughout his life, he played the role of universal gadfly, whose commitment to the truth transcended the party line as well as received wisdom. But how much of this was imposture? In this highly critical study, Richard Seymour casts a cold eye over the career of the “Hitch” to uncover an intellectual trajectory determined by expediency and a fetish for power.

As an orator and writer, Hitchens offered something unique and highly marketable. But for all his professed individualism, he remains a recognizable historical type—the apostate leftist. Unhitched presents a rewarding and entertaining case study, one that is also a cautionary tale for our times.

“Clever, incisive...Unhitched offers a more thorough and in-depth discrediting of Hitchens than anything previously published. And in doing so, Seymour has made an important contribution to understanding the political role of the intellectual celebrity in our time.”

“Richard Seymour's Unhitched, a slim and scathing denunciation of turncoat scoundrel Christopher Hitchens, is a thoroughly satisfying and politically important book by one of the few remaining great radical left journalists.”

“Seymour reveals Hitchens as having had a lifelong admiration both for the United States and for empires as civilizing forces.”

“Well-argued... I think Seymour rather pitied Hitchens, as the married man pities the philanderer.”

“He is not worthy of changing Christopher Hitchens’s printer cartridge.”

“A nasty piece of work...(Full disclosure: Hitchens was a friend, mentor, and neighbor of mine.)”

“Seymour’s book offers an exciting counterbalance to the often uncritical praise that has flowed heavily since Hitchens was diagnosed with esophageal cancer in June 2010.”

“Seymour is certainly master of the records; he knows the work closely and cites it scrupulously. But his headlong, foam-flecked interpretation, voiced in a manner recklessly close to Hitchens’s own but without the grace, the wit, the tearing high spirits and the faultless ear for the fall of a cadence of his great original, becomes merely tedious, repetitive and unconvincing... This little book is 134 pages long. The author shouldn’t have done it. It is paltry and it is trivially abusive. Its subject was as eloquent, cultivated, exuberant, unstoppable, sheerly gigantic a journalist as British or American politics has known since George Orwell.”

“Caustic demolition of Hitchens – not dissimilar to Hitch’s way with Mother Teresa or the Clintons.”

– The Big Issue In The North

“In Unhitched: The Trial of Christopher Hitchens, we again find Seymour’s customary clarity, rigor, and intelligence as he offers a brilliant analysis of the shifting landscape of Hitchens’ path from socialist internationalist to Liberal Hawk. It is a work brimming with hot anecdotes and tangy tidbits as Seymour goes at it mano a mano with “The Great Contrarian,” recapitulating the menu of contradictions that comprise the life of this practiced ironist.”

– Alan Wald, Against the Current

Richard Seymour on the Israeli attacks on the protests in Gaza and murderous humanitarianism.

How does race relate to class in capitalism? Is it intrinsic and essential to the reproduction of capital, or merely an accidental feature of particular capitals? In this recent essay by Richard Seymour, and originally published on his Patreon, Seymour considers a debate within Marxism on the relationship between class, race and capitalism.

The murder of Hélène Rytman

In this recent essay, by Richard Seymour and originally published on his Patreon reflects on Hélène Rytman, the wife of Louis Althusser, and the place of her killing in the reception of Althusser's life and work.

To read Seymour's essays as soon as they are released, subscribe to his Patreon.