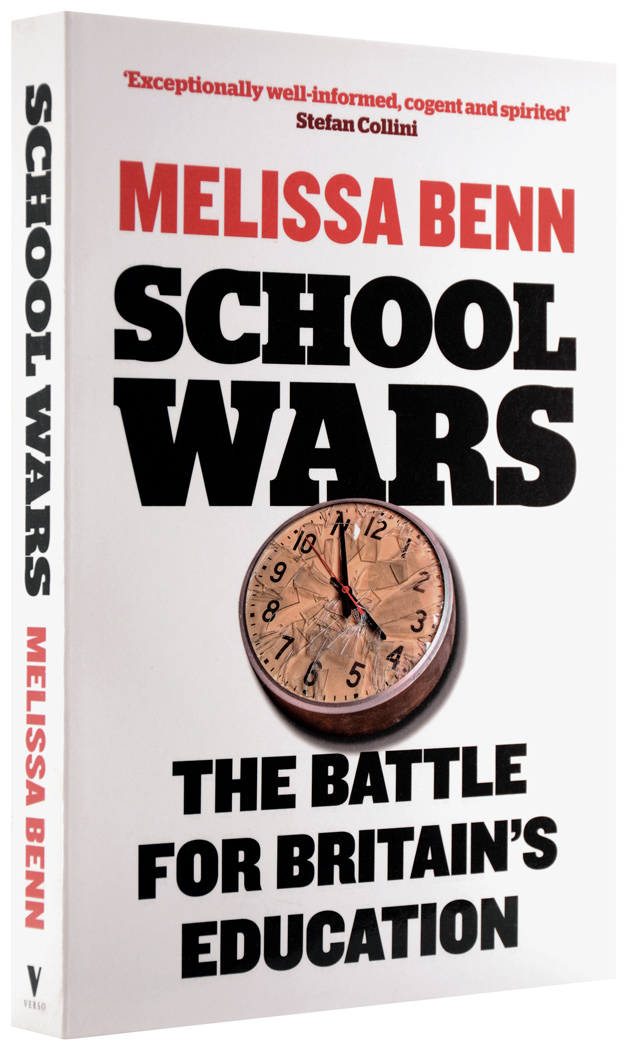 From the poorest comprehensives to the most well-resourced independent schools, School Wars takes a forensic look at the inequalities of our current system, the damaging impact of spending cuts, the rise of “free schools” and the growth of the private sector in education. Melissa Benn explores, too, the dangerous example of US education reform, where privatization, punitive accountability and the rise of charter schools have intensified social, economic and ethnic divisions.

The policies of successive British governments have been muddled and confused, but one thing is clear: that the relentless application of market principles signals a fundamental shift from the ideal of quality education as a public good, to education as market-controlled commodity. Benn ends by outlining some key principles for restoring strong educational values within a fair, non-selective public education system.

“In this polemic, Benn sets herself up as a one-woman commission of inquiry, analyzing the social, political, and financial case for comprehensive schooling in a climate of spending cuts and a culture of privatization.”

“This is a tremendous book. It is a passionate polemic about the most important policy divide of the day … It is powerful but also reasonably argued … [and] marks her out as one of Britain’s foremost advocates of comprehensive education.”

“Benn’s book could well be an important watershed. It is a clear-sighted re-statement of why universal, comprehensive education is – obviously – the best option. It should, and hopefully will, be taken as a rallying call to the left.”

“An exceptionally well-informed, cogent, and spirited account of the debates over secondary education in Britain.”

“If you read just one book on education this year, then make sure it’s School Wars by Melissa Benn. Brilliantly researched and compellingly written.”

“A partisan but surprisingly fair book … Alongside the bracing polemic runs a warmer current of idealism about what state education can achieve.”

“Short, well written and passionate, and is meant to be read not just by those who are experts in education, but also by parents struggling for the first time with a system that must seem impenetrable and unfair, who must wonder if things have to be this way. It tells the story of British state education from 1945, and illustrates starkly the danger it is in.”

“Lucid [and] strongly committed … Benn’s crucially timely account is full of insight about how privatisation and examination-led schools maintain and lead to further systemic social division. Yet her book is not an analysis born of, or leading to, despair or inaction … [but] redolent with humane faith and a belief that public services should remain within the remit of a dynamic democratic state, at every level.”

“What Melissa Benn’s superb, evidence-based history of the educational battleground during the second half of the last century proves is that today comprehensives are mainly Good or Outstanding.”

“School Wars is a book that touches nerves in the English education system. It probes the way in which differences for young people show themselves and exposes so much of the rhetoric in a world where we take extreme variation in opportunity and outcome for granted. Melissa Benn raises the sorts of questions that have needed answering for a long time and offers much food for thought to those with responsibility at every level.”

– Mick Waters, former Director of Curriculum at the British Qualifications and Curriculum Authority

“Superb … School Wars provides ample evidence that an approach to education inspired by the free market, and founded on a competition in which the dice are loaded is deleterious, regressive and unjust. If this book is read as widely as it deserves to be, the author will have started a conversation that might just arrest this trajectory.”

“Benn’s book is a powerful combination of history, contemporary analysis and prospectus, seeking to explain why comprehensives have fallen out of favour in recent years and why England needs a revival of the comprehensive ideal … This is both a timely analysis and a serious warning which no-one should ignore.”

“A wake-up call for so many of the population who may not realise just how much the school system has been fragmented.”

“A beautifully written and concise history of comprehensive education.”

“Melissa Benn has written a timely, useful and highly readable account of issues around education in Britain.”

“Evangelistic – in the best sense of that word. I thoroughly commend School Wars to all those who, like me, are concerned about the imminent destruction of our state education system.”

“Melissa Benn has given the defenders of equitable education for the whole community, not just the chosen few, some powerful ammunition.”

“Melissa Benn deserves – demands – to be read. This is a passionate but well made argument for universal public education to promote every child's chances – not just for them, but for us.”

– Will Hutton, author of Them and Us: Changing Britain – Why We Need a Fair Society

“A passionate defence of comprehensive schools.”

Eton or Charterhouse? on the Labour Campaign Against Private Schools

Could Boris Johnson be the last Prime Minister to be educated at Eton? Sol Gamsu makes the case for the integration and abolition of private schools and argues that the tensions and complexity of this issue goes to the heart of creating a socialist strategy for structural change

The Future of our Universities: Part 2