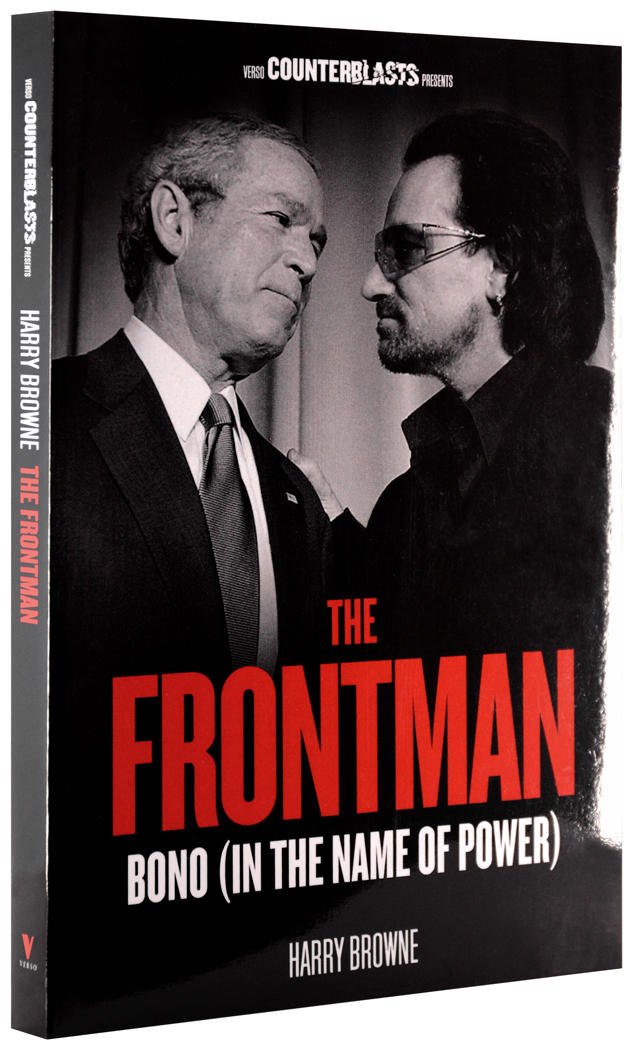 Celebrity philanthropy comes in many guises, but no single figure better encapsulates its delusions, pretensions and wrongheadedness than U2’s iconic frontman, Bono—a fact neither sunglasses nor leather pants can hide. More than a mere philanthropist—indeed, he is said to lag behind some peers when it comes to parting with his own money—Bono is better described as an advocate, one who has become an unwitting symbol of a complacent wealthy Western elite.

The Frontman shows how Bono defended U2's partial move to Amsterdam, avoiding Irish taxes; his paternalistic advocacy of neoliberal solutions in Africa; his multinational business interests; and his hobnobbing with Paul Wolfowitz and shock-doctrine economist Jeffrey Sachs. Carefully dissecting the rhetoric and actions of Bono the political operator, The Frontman argues that he is an ambassador for imperial exploitation, a man who has turned his attention to a world of savage injustice, inequality and exploitation—and helped make it worse.

“[A] brilliant and blistering book”

“[An] impressively well-researched polemic...Browne's case is simple but devastating.”

“The Frontman is sharp, funny and deadly accurate”

“Browne’s dug past the PR and the rhetoric and found…a Mad Men cliché for our times. But that’s not why you need to read The Front Man. You do need to. Not because you want to better understand Bono, let alone empathize with his plight, but because what topples is not only Bono’s stature but the excuses his chosen trade, liberal philanthropic paternalism, makes for itself.”

“[A] punchy new tome...Browne's opening paragraph reads: 'For nearly three decades as a public figure, and especially in this century, Bono has been, more often than not, advocating ineffective solutions, patronising the poor, and kissing the a*** of the rich and powerful.' That about covers it!”

“‘Bono, The Frontman: In The Name Of Power’ is as good a critique of ‘Ireland Inc’ as most of the after-the-fact books on political and financial corruption that are cramming the shelves of the nation’s bookshops.”

“At last! A bracing take-no-prisoners polemic that acknowledges Bono’s practical contributions to a more humane version of global capitalism, but demonstrates how good intentions can be no alibi for fronting for the status quo.”

– Alex de Waal, author of Famine Crimes: Politics and the Disaster Relief Industry in Africa and Executive Director of the World Peace Foundation at the Fletcher School

“The U2 singer’s record on Africa, poverty and politics all take a beating...The charges are stinging”

“I’ve been waiting years for this book. It’s the stuff you instinctively knew about Bono – his increasingly desperate flirtations with power, his fundamentally conservative and religious motivation, his adherence to neo-liberal and essentially Republican capitalist economic strategies, his old-style crusader’s vision of Africa as another culture to be colonised, blimey even his slimy and unapologetic tax-dodging – all that stuff wrapped up in a grounded, inquisitive, even-handed bookful of research.”

“Harry Browne’s book is not only a damning indictment of Bono’s work in tackling global poverty and injustice, it is an informative and instructive read that shows us the “heart of darkness” that lies behind the message he advocates.”