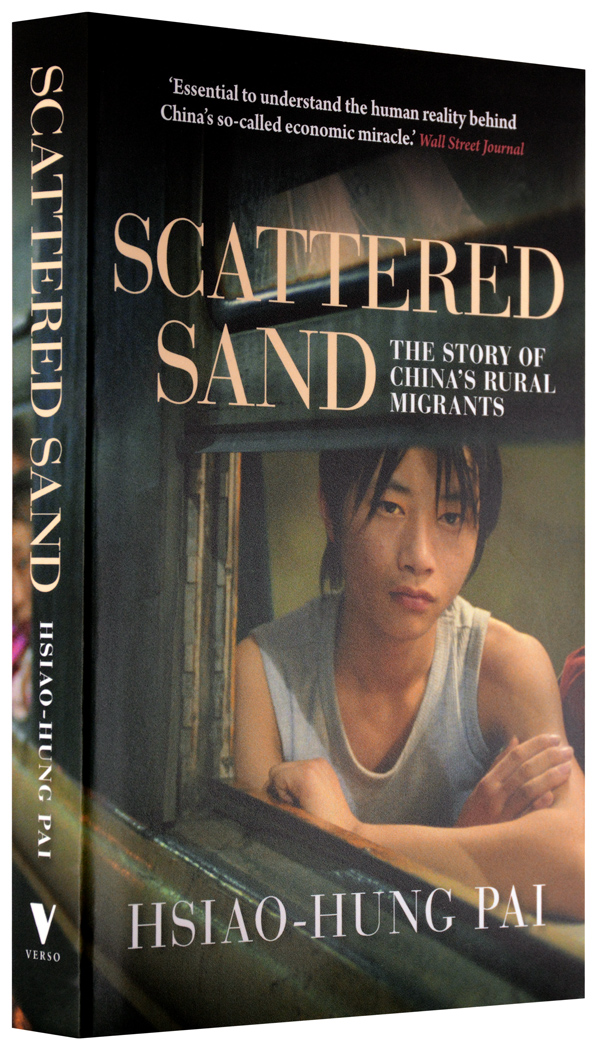 Firsthand report on the largest migration in human history

Each year, 200 million workers from China’s vast rural interior travel between cities and provinces in search of employment: the largest human migration in history. This indispensable army of labour accounts for half of China’s GDP, but is an unorganized workforce—‘scattered sand’, in Chinese parlance—and the most marginalized and impoverished group of workers in the country.

For two years, the award-winning journalist Hsiao-Hung Pai travelled across China, visiting labourers on Olympic construction sites, in the coal mines and brick kilns of the Yellow River region, and at the factories of the Pearl River Delta. She witnessed the outcome of the 2009 riots in the Muslim province of Xinjiang; saw towns in rubble more than a year after the colossal earthquake in Sichuan; and was reunited with long-lost relatives, estranged since her mother’s family fled for Taiwan during the Civil War. Scattered Sand is the result of her travels: a finely wrought portrait of those left behind by China’s dramatic social and economic advances.

“Pai’s book is exceptional not only in the depth of her research, but also in giving a voice to the people she befriends. Essential to understand the human reality behind China’s so-called economic miracle.”

“Hsiao-Hung Pai's intrepid journalism is one of the most revealing guides to contemporary China.”

– Pankaj Mishra, author of From the Ruins of Empire

“Pai, diligent to the end, and writing out of love rather than hatred for China, holds on to the hope that resistance is fertile.”

“Eloquent and wide-ranging, Scattered Sand not only does justice, eloquently and comprehensively, to [migrant workers'] increasingly marginal position in Chinese society, it also provides useful whirlwind introductions to Chinese labor policy, local government corruption, and minority discrimination, among other issues.”

“The product of thorough reporting among China’s most marginalised citizens shows what can be discovered despite official obstruction.”

“What Pai accomplishes is that difficult thing: to combine deftly personal testimonies with statistics. One never wonders, after some particularly ghastly first-person observation, whether this is too awful to be generally true.”

“Scattered Sand captures the sadness, resilience and anger of China’s millions of internal and international migrants. This illuminating book effortlessly interweaves individual voices, rarely heard by English-speaking audiences, with the history, politics and economics that shape migrants’ stories and their choices.”

“Hsiao-Hung Pai brings her knowledge of China’s history to this detailed examination of the plight of the millions of peasants searching for work in China’s booming cities and, failing that, in other countries … A grim but keen view of the dark underside of China’s prosperity.”

“The Chinese 'miracle' gets a reality check in this engrossing exposé...A moving contribution to the growing literature on the new China, the book will prove relevant for anyone interested in ongoing debates around migrant labor in a globalized economy.”

“It focuses on contemporary China, where the scale of rural migration – over 130 million men and women have left their home provinces in search of work – makes the demographic debates about modern-day Europe seem parochial and hysterical. It pays tribute to a class of people that, although exalted under Mao as a revolutionary vanguard, has constantly to face the threat of pauperisation. It amplifies sounds – plaintive chants, desperate petitions, exhausted prayers, sceptical curses – that are often drowned out by the stentorian boosterism of the state loudspeaker.”

“In documenting lives and deaths of stunning deprivation and equally stunning dignity, [Pai] is helped considerably by her style, which is restrained and workmanlike. She has no axe to grind and will not stoop to pity; she is here to tell us what is happening in the fields and factories of the world we share.”

From Illusion to Empire: Chuang on The Creation of the Chinese Economy

They’re closing the borders, let’s open up our schools!