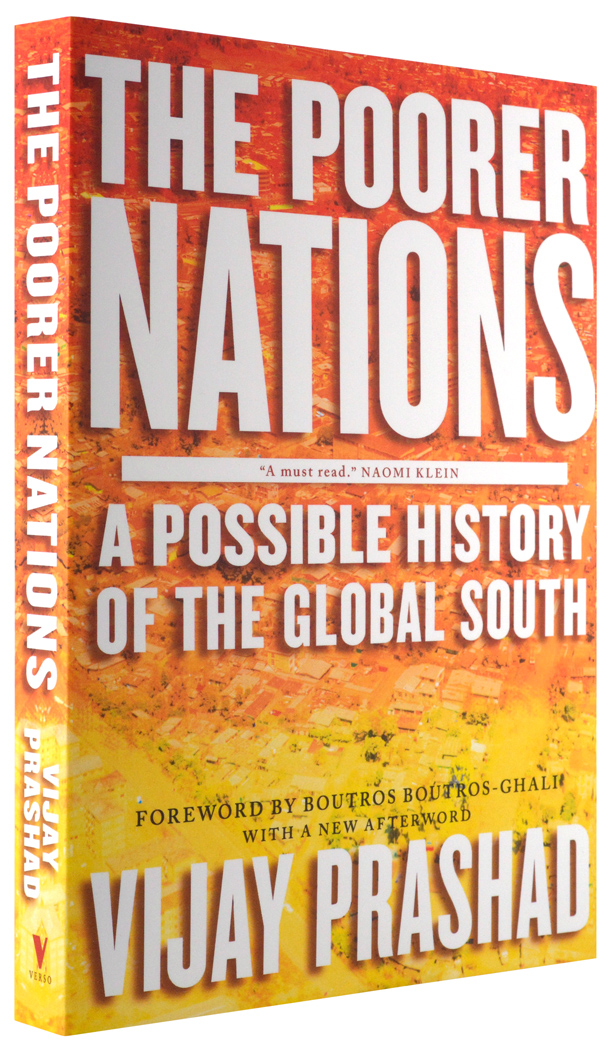 A Possible History of the Global South

In The Darker Nations, Vijay Prashad provided an intellectual history of the Third World and traced the rise and fall of the Non-Aligned Movement. With The Poorer Nations, Prashad takes up the story where he left off.

Since the ’70s, the countries of the Global South have struggled to build political movements. Prashad analyzes the failures of neoliberalism, as well as the rise of the BRICS countries, the World Social Forum, issue-based movements like Via Campesina, the Latin American revolutionary revival—in short, efforts to create alternatives to the neoliberal project advanced militarily by the US and its allies and economically by the IMF, the World Bank, the WTO, and other instruments of the powerful. Just as The Darker Nations asserted that the Third World was a project, not a place, The Poorer Nations sees the Global South as a term that properly refers not to geographical space but to a concatenation of protests against neoliberalism.

In his foreword to the book, former Secretary-General of the United Nations Boutros Boutros-Ghali writes that Prashad “has helped open the vista on complex events that preceded today’s global situation and standoff.” The Poorer Nations looks to the future while revising our sense of the past.

“It is startling how insulated the West has remained from the thinking, achievements, and struggles of the great majority of the world’s people. This lucid and well-informed study reveals how much there is to learn from this rich and vibrant record.”

“At a time when the ideologues of the Washington Consensus appeal to former colonies to free themselves from history, Vijay Prashad recalls a past without which it is impossible to understand the present.”

“A unique, exceptional study that weaves together events, processes, and strands into a comprehensive overview of the struggle of developing countries to change the world economic order.”

– From the foreword by Boutros Boutros-Ghali, former Secretary-General of the United Nations and Chairman of the South Central Board

“With eloquence, wit, and urgency, Prashad tells the real story of global restructuring, the dismantling of the Third World Project, the rise and demise of neoliberalism, and how the future of the planet is tied to the dreams of the dispossessed.”

“Vijay Prashad is our own Frantz Fanon. His writing of protest is always tinged with the beauty of hope.”

“Vijay Prashad has courageously and meticulously forged a fascinating study that challenges mainstream, Western narratives of world history. In this provocative and sweeping exploration, the injustices and subjugation of peoples in the global South are not only made visible but political.”

“Vijay Prashad is fast becoming the historian of the Global South. His newest book The Poorer Nations is as detailed and well-cited as anything by Noam Chomsky. Prashad turns the statistics and descriptions he writes into prose that is understandable and simmering with a justified rage.”

“An ambitious, complex, and lucid history of a political and economic project that emanated from the global South…The Poorer Nations distills a complex economic history into a lucid and engaging narrative… A historical materialist history of economic transformation that helps us understand the shift to neoliberal governance in our times.”

Our selected History reading for the academic year ahead.

Aijaz Ahmad's essay on the history of the far right in India and its encroachment into the country's liberal institutions was included in the the Idea of India, Background Papers, EMS Smrithi Series compiled by M.N. Sudhakaran et al, Thrissur, June 2016 and previously published online by The Indian Cultural Forum.