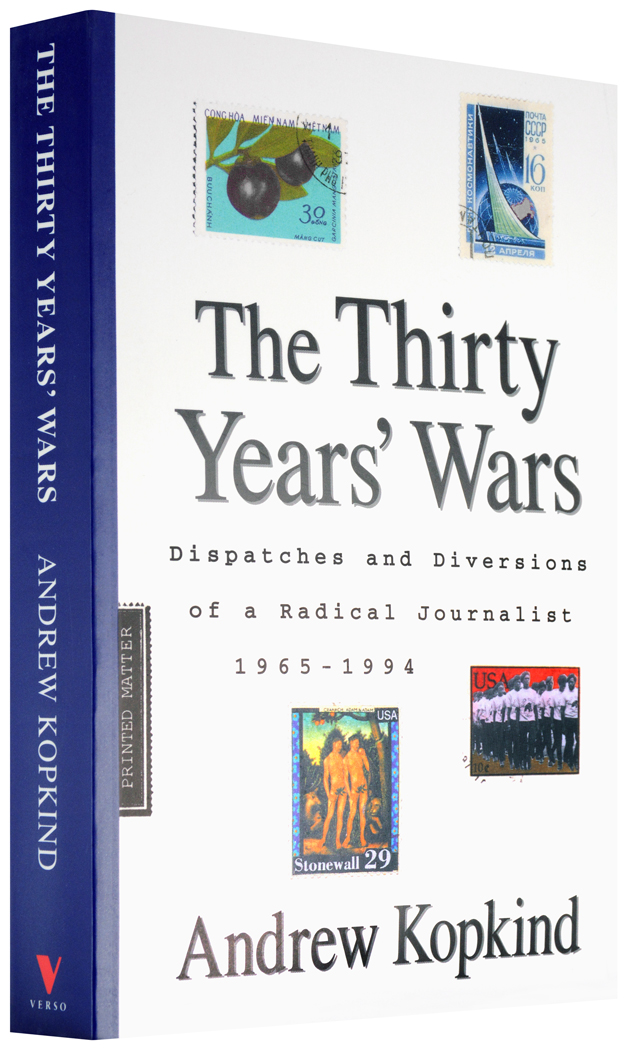 In Boston in the 1970s he wrote articles and movie reviews for a range of publications and did regular political commentary for WBCN radio. With John Scagliotti, he produced “Lavender Hour,” the first gay and lesbian vari­ety program on American commercial radio.

He joined The Nation in 1982, where he was an associate editor and the senior political writer until his death from cancer on October 23, 1994. He’d been a contributor to Grand Street, New Left Review, Esquire, Vogue and Il Mani­festo, among others. He lived in New York and Vermont, where he wrote and gardened in equal measure.

“The Sixties” did not end at its appoint­ed time. Its defining battles – real and rhetorical – would not be con­tained within the tidy parentheses of a calendar. This book presents the thirty-year shocks and aftershocks of that cataclysm as recorded by a journalist who never forgot his history and so, in the end, has written an epic of our times.

Andrew Kopkind’s narratives begin on the road from Selma in 1965 and end with the an­niversary of Stonewall in 1994. They take us from the earliest conception of the black panther as a symbol of power and independence in the deep South to its migration and catastrophic fate in the North; from Martin Luther King to Jesse Jackson; from Watts to South Central; from the first aborted triumph of the War on Poverty to the ongoing war against the poor.

Here is a history of engagement. The Thirty Years’ Wars explores the limits of liberalism even as it exposes the fault lines of reaction and offers a clarifying view of the contours of revolu­tionary aspirations. Pull at one thread and there is the cord that stretches from Johnson to Nixon, from Carter to Reagan to Clinton. Pull at another and there are the hopes of rebels from Chicago to Chiapas.

Kopkind never condescends – not to those whom liberals love to call victims, and not to Reagan’s children. Nor does he ghettoize his subjects. In the mix we get street-fighting and Woodstock, state terror and Olympic spectacle, Christian soldiers and gay soldiers, blue collars, red banners and some white flags. Life as it is experienced. As a gay man whose theme was always, in one way or another, the contest between freedom and chains, Kopkind well understood that there is no pure realm of the per­sonal. History kicks up fights and carnivals both – you’d best get in it.

“The Thirty Years’ Wars reveals its author to be not just a great radical journalist but a major repository of that enduring American ideal Walt Whitman called the ‘Democratic Vista’ ... Shifting through the culture around him with infinite patience, Kopkind does precisely what a radical democrat in hard times should: He nudges us towards clarity.”

“Andrew Kopkind had a great talent for describing the political moods and emotions of the moment. Even now, his old dispatches crackle with the chaotic, breakneck energies of the late 1960s.”

“One of the clearest, most courageous voices in American radical journalism.”

“Politically engaged journalism at its best.”

“Probably no better record exists of these landmark events than the vivid reflections collected in The Thirty Years’ Wars.”

“Shelve this collection next to the best writings of l.F. Stone and H.L. Mencken in that great library of books that torment the comfortable.”

Watts, Lowndes County, Oakland: The Founding of the Black Panther Party for Self Defense 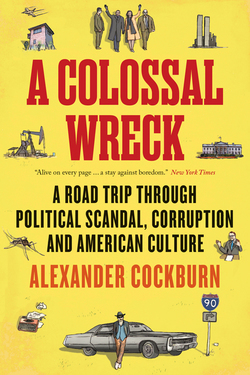 A Colossal Wreck
by Alexander Cockburn
60% off