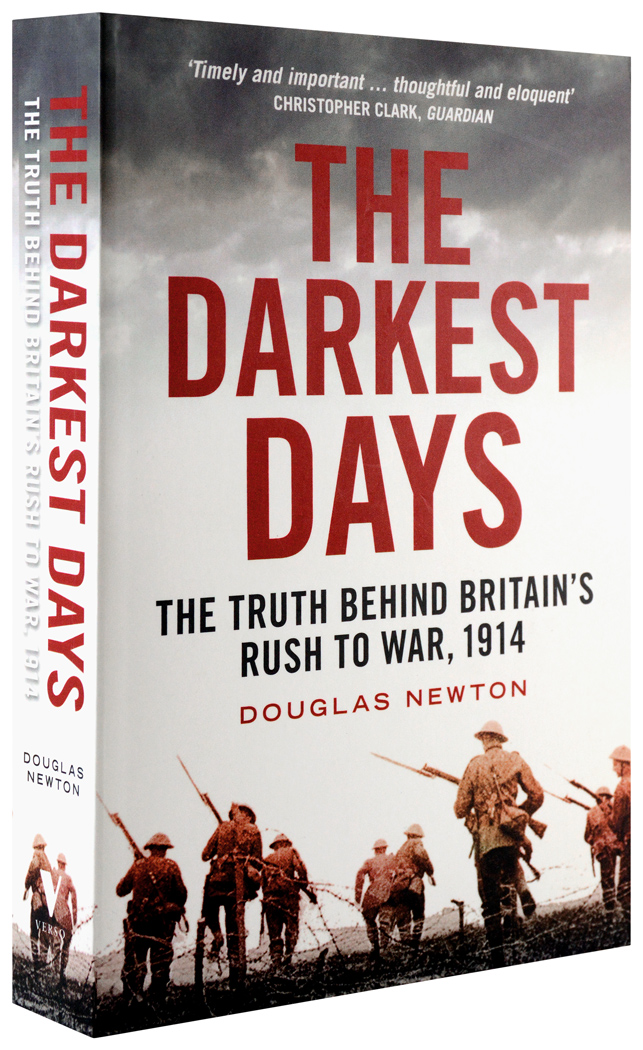 The centenary of the outbreak of the First World War may be commemorated by some as a great moment of national history. But the standard history of Britain’s choice for war is far from the truth. Using a wide range of sources, including the personal papers of many of the key figures, some for the first time, historian Douglas Newton presents a new, dramatic narrative. He interleaves the story of those pressing for a choice for war with the story of those resisting Britain’s descent into calamity. He shows how the decision to go to war was rushed, in the face of vehement opposition, in the Cabinet and Parliament, in the Liberal and Labour press, and in the streets. There was no democratic decision for war.

The history of this opposition has been largely erased from the record, yet it was crucial to what actually happened in August 1914. Two days before the declaration of war four members of the Cabinet resigned in protest at the war party’s manipulation of the crisis. The government almost disintegrated. Meanwhile large crowds gathered in Trafalgar Square to hear the case for neutrality and peace. Yet this cry was ignored by the government. Meanwhile, elements of the press, the Foreign Office, and the Tory Opposition sought to browbeat the government into a quick decision. Belgium had little to do with it.

The key decision to enter the war was made before Belgium was invaded. Those bellowing for hostilities were eager for Britain to enter any war in solidarity with Russia and France – for the future safety of the British Empire. In particular Newton shows how Prime Minister H. H. Asquith, Foreign Minister Sir Edward Grey, and First Lord of the Admiralty Winston Churchill colluded to pre-empt the decisions of Cabinet, to manipulate the parliament, and to hurry the nation toward intervention by any means necessary.

“Should Britain have entered the war in 1914? This question has recently aroused controversy. As Douglas Newton shows, it was controversial in 1914, too. This book is a compellingly written, tightly argued, deeply researched and bracingly revisionist study of the decisions that led to British intervention. Newton uproots many hardy myths and reveals the deep divisions within the political elite of a country on the brink of war.”

– Christopher Clark, author of The Sleepwalkers: How Europe Went to War in 1914

“I felt I was breathing the pure, clear mountain air of real, refreshing history. Not justifying, not rehashing, not regurgitating, but boldly telling what the writer feels very strongly is an important truth, a truth which has reached out of the archives and put its thumb in his eye.”

“A gripping story of high drama as fundamental decisions shift back and forth from day to day and even from hour to hour. These are also events about which we should say: ‘Lest we forget!’”

“Both scholarly and accessible. This in-depth account of the British response to the assassination of Franz Ferdinand will open the eyes of many hitherto reluctant to face the facts.”

“Newton writes well, and with a feel for the tragedy of the Great War missing in most accounts ... the scholarship invested in this work is meticulous.”

“One of the most thorough modern history texts of recent times.”

“If you want to understand how a Liberal cabinet decided to take Britain to war two days before the German invasion of Belgium, over the protests of a considerable peace movement, read Douglas Newton's eloquent The Darkest Days.”

Inside the European Cataclysm

'The Attack' by R. H. Tawney: A Soldier Turned Socialist