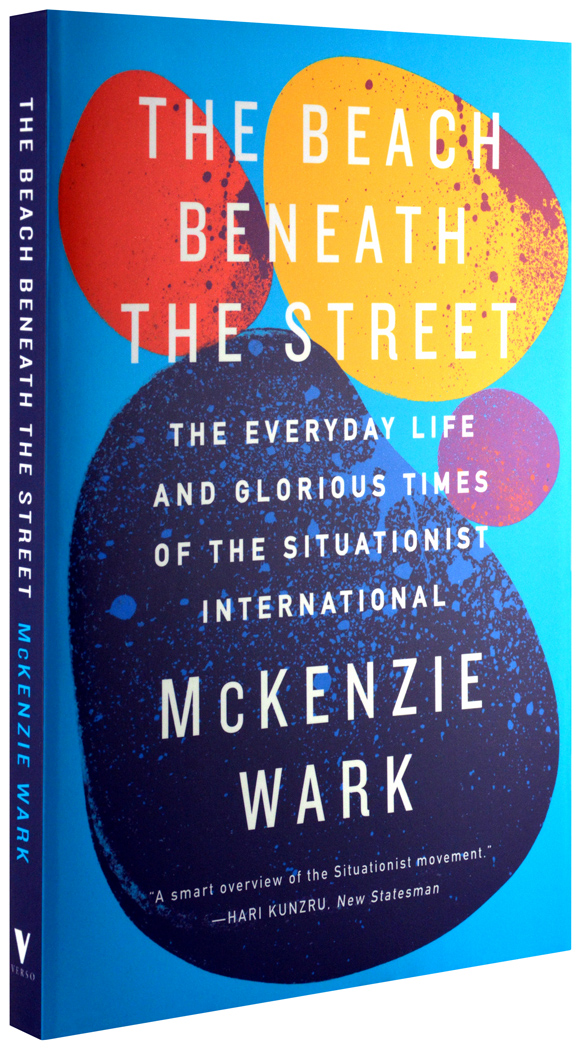 The Beach Beneath the Street
The Everyday Life and Glorious Times of the Situationist International
by McKenzie Wark
Paperback
Paperback with free ebook
$19.95
208 pages / April 2015 / 9781781688380

The acclaimed, readable history of the Situationist International by the author of A Hacker Manifesto

Over fifty years after the Situationist International appeared, its legacy continues to inspire activists, artists and theorists around the world. Such a legend has accrued to this movement that the story of the SI now demands to be told in a contemporary voice capable of putting it into the context of twenty-first-century struggles.

McKenzie Wark delves into the Situationists’ unacknowledged diversity, revealing a world as rich in practice as it is in theory. Tracing the group’s development from the bohemian Paris of the ’50s to the explosive days of May ’68, Wark’s take on the Situationists is biographically and historically rich, presenting the group as an ensemble creation, rather than the brainchild and dominion of its most famous member, Guy Debord. Roaming through Europe and the lives of those who made up the movement—including Constant, Asger Jorn, Michèle Bernstein, Alex Trocchi and Jacqueline De Jong—Wark uncovers an international movement riven with conflicting passions.

Accessible to those who have only just discovered the Situationists and filled with new insights, The Beach Beneath the Street rereads the group’s history in the light of our contemporary experience of communications, architecture, and everyday life. The Situationists tried to escape the world of twentieth-century spectacle and failed in the attempt. Wark argues that they may still help us to escape the twenty-first century, while we still can.

“Wark is a marvellous guide to the micro-society of the Situationists ... She brings to the task a necessary sympathy, an encyclopedic knowledge, and a certain stylistic irrepressibility.”

“Wark is a fine aphorist ... Playful, angry, depressed, celebratory, this is a book for anyone not convinced that there is no alternative to the way we live now.”

“Wark’s readable explanation of the movement’s ideas ... is the best I have read.”

“[A] smart overview of the situationist movement.”

“A sexy book for a sexy movement... This is a beautifully written, exciting and broad study, one that may perhaps become a definitive introduction to the SI for many.”

“A playful, smart and occasionally epigrammatic study of the Situationists ... [a] brilliant account ... an essential work for our own times.”

“The book I read three times back to back was McKenzie Wark’s brilliant study of the Situationists, ”

“This is no ordinary history. Instead, ‘it’s a question of retrieving a past specific to the demands of the present.’ The Beach Beneath the Street rereads that past in a way that prefers not to smooth out its messier edges, refuses to reify (to pick up the jargon) what made it radical, what still makes it relevant.”

“Covering the SI’s adventures in philosophy, art, architecture, literature and cinema (and suggesting that we should do away with many of the distinctions between these categories), Wark traces a lineage we have apparently lost.. The author’s primary proposal is that although we live in serious times we should still have fun with time. We should treat history as a user’s manual. This history of the SI shifts with gay abandon between past, present and future tenses, and constantly rattles the boundaries.”

“In an alienated, all too knowing world absent of God, art and revolution, Wark’s book dares us to keep our spirits up, asking us to think about how to maintain creative resistance, how to keep fidelity with some detournéed idea of the Marxist and Situationist past, and, following their goal of ideas in action, how best to practise our passionate ‘solidarity without faith.’”

“Wark’s history is timely ... with the age of austerity promising more trouble, the Situationists, those alienated prophets of the media age, still tout the most adventurous analysis of 21st-century life – and what happens next.”

“McKenzie Wark’s engaging narrative could not have come at a better time – last week’s riots demonstrated tragically the profound alienation, even despair, of swathes of urban poor and destitute and minorities’ worrying descent into hellish criminality.”

“One of the best aspects of his pithy, often self-consciously lapidary, book is his intriguing investigation of some of the byways of Situationist historiography ... . the Situationists’ attitude towards intellectual property is hugely relevant in an era when digital reproduction has dragged information towards the ‘free’ model, and Wark addresses this well in sections on the implications of détournement—the re-use and modification of fragments of already existing texts and images in the creation of new works—for political practice.”

“What sets Wark’s book apart from those many other failed histories is in its resistance to merely telling the easy story. The familiar watchwords of the SI – dérive, detournément, potlatch – appear as one would expect, but Wark presents them as breathing, charged ideas, not some dead terms once again dusted off and rehashed. When we relegate events to pure history we rob moments, situations, of their power to change. We turn specifics into constants, tactics into rules, and ultimately render radical gestures impotent. Wark wants to give these moments a different history: to show that those theories and practices of the Situationist International aren’t done with us yet.”

Complete your McKenzie Wark bookshelf with this reading list! All 40% off (print books) and 60% off (ebooks) until January 4th.