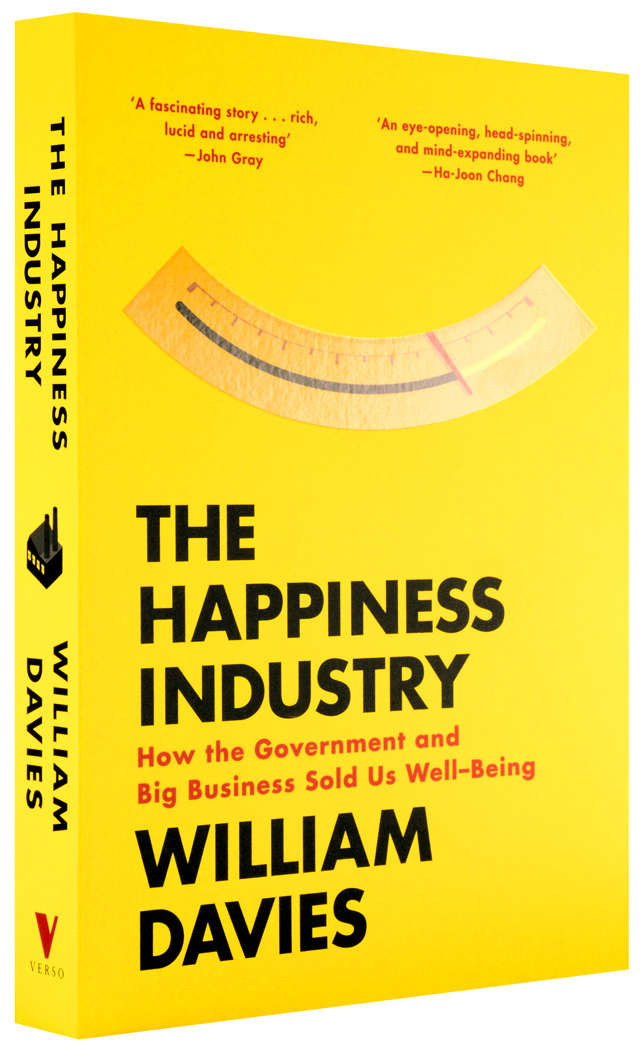 What was a Buddhist monk doing at the 2014 World Economic Forum in Davos lecturing the world’s leaders on mindfulness? Why do many successful corporations have a ‘chief happiness officer’? What can the chemical composition of your brain tell a potential employer about you? In the past decade, governments and corporations have become increasingly interested in measuring the way people feel: ‘the Happiness index’, ‘Gross National Happiness’, ‘well-being’ and positive psychology have come to dominate the way we live our lives. As a result, our emotions have become a new resource to be bought and sold.

In a fascinating investigation combining history, science and ideas, William Davies shows how well-being influences all aspects of our lives: business, finance, marketing and smart technology. This book will make you rethink everything from the way you work, the power of the ‘Nudge’, the ever-expanding definitions of depression, and the commercialization of your most private feelings. The Happiness Industry is a shocking and brilliantly argued warning about the new religion of the age: our emotions.

“Deeply researched and pithily argued, Davies's work is a welcome corrective to the glut of semi-scientific happiness books that have become so popular in business and management circles, and which rarely, if ever, acknowledge the larger ideological goals of workplace well-being.”

“When the 18th-century philosopher Jeremy Bentham suggested that maximising happiness was the job of government, he inspired a quest to measure happiness that continues today. Until recently, the only effective tool for that—as the political scientist Will Davies explains in a forceful new book, The Happiness Industry—has been money.”

“As Davies implies in this readable, disturbing book, being depressed by the human condition will no longer be socially acceptable, or even an option. The state or big business will soon see to it!”

“Brilliant … explains how the rhetoric of competition has invaded almost every domain of our existence.”

– Evgeny Morozov, author of To Save Everything, Click Here (in praise of The Limits of Neoliberalism)

“When did happiness itself become a liability? When the market figured out that making us content is the first stage in manufacturing our consent. In this accessible, fact-filled history of measured happiness, William Davies shows us how metrics of well-being were systematically disconnected from meaning and community, and in the process transformed from the very core of human power into an access panel to our desires and behavior. I can’t listen to that damned ‘Happy’ song anymore without thinking about whom my supposed happiness really serves, and what they’re willing to do to make sure I stay that way.”

– Philip Mirowski, author of Never Let a Serious Crisis Go to Waste (in praise of The Limits of Neoliberalism)

“In a heady mixture of psychology, economics, sociology, and philosophy, this book reveals the misguided nature of the currently popular intellectual project to make people happier and improve society through 'scientific' understanding - and manipulation - of human beings. With many governments and corporations hell-bent on control promoting it aggressively, this project is increasingly depriving our societies of true social bonds, democratic participation, critical thinking, and even happiness itself. An eye-opening, head-spinning, and mind-expanding book.”

– Ha-Joon Chang, University of Cambridge, author of 23 Things They Don't Tell You about Capitalism

“A brilliant, and sometimes eerie, dissection of our times.”

“William Davies argues that our happiness fixation may have more to do with the interests of corporations and governments than personal fulfillment.”

“An interesting contribution to the growing genre of happiness studies”

“Davies, explaining the evolution of the science of happiness from the French Revolution to the present, argues it essentially serves the interests of the powerful elite. This challenging book will appeal to academics and students of various disciplines.”

“Davies’s concern is to show that by making us more resilient and more productive, the happiness industry tricks us into settling for too little.”

“How 'managing our happiness' is becoming an increasingly lucrative and insidious industry.”

“The Happiness Industry is a thought-provoking and daring intervention into the crowded field of neoliberal political economy […] Its bold theses and elegant historical foundation provides political economists with much new material to consider.”

– Erasmus Journal for Philosophy and Economics

“William Davies uses scientifi c data, commercial reports and studies into wellbeing and happiness to ascertain that a once innocent emotion is now being transformed into a marketing tool – and it is people who are paying the price. The Happiness Industry . . . is a fascinating yet slightly uncomfortable read that confi rms a creeping suspicion you might have had already – that your shopping receipts know you better than you know yourself.”

“The language of good feeling and scientifi c utopianism are a cover for an older, more insidious goal: “a single index of human optimization” that would reduce all human experience to qualities that can be diagnosed, tracked, graphed and, ultimately, controlled.”

“Davies has added a valuable critique, and a fantastic read, to the current literature on happiness.”

“Although the book draws on scientific knowledge, it remains a popular book aimed at an interested general population and should be read as such. ... It is a fascinating exploration and well-grounded argument of how and why people are cashing in on the 'happiness industry'.”

Will Davies on 'Nervous States: How Feeling Took Over the World' (Part 1)

In the first part of a two-part interview Will Davies discusses declining public trust in experts, the blurring of the distinctions between war and peace, the increasing irrelevance of macroeconomic indicators, and the rise of populism, with Alex Doherty on the Politics Theory Other podcast