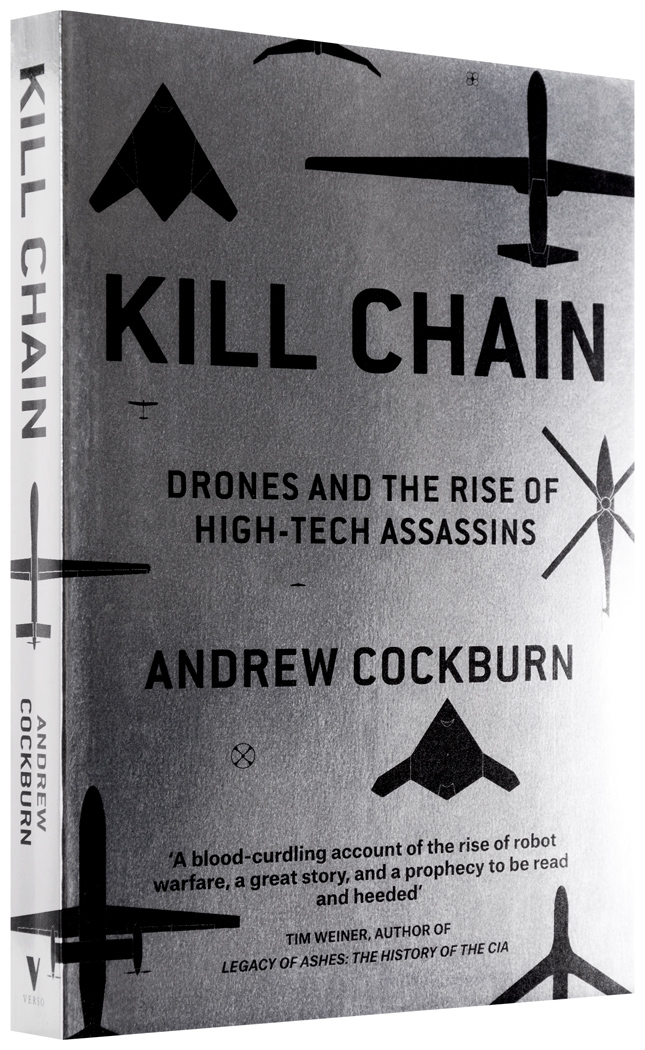 Surveillance, technology, war, and the failed US policy of remote killing

Kill Chain is the essential history of drone warfare, a development in military technology that, as Andrew Cockburn demonstrates, has its origins in long-buried secret programmes dating to US military interventions in Vietnam and Yugoslavia. Cockburn follows the links in a chain that stretches from the White House, through the drone command center in Nevada, to the skies of Helmand Province.

The book reveals the powerful interests—military, CIA and corporate—that turned the Pentagon away from manned aircraft and boots on the ground to killing by remote control. Cockburn uncovers the technological breakthroughs, the revolution in military philosophy, and the devastating collateral damage resulting from assassinations allegedly targeted with pinpoint precision.

Vivid, powerful and chilling, Kill Chain draws on sources deep in the military and intelligence establishment to lay bare the failure of the modern American way of war.

“This brilliant book tells us how computers kill soldiers and civilians, and explains with bone-chilling clarity how generalship gave way to microchips from Vietnam to Afghanistan. A blood-curdling account of the rise of robot warfare, a great story, and a prophecy to be read and heeded.”

– Tim Weiner, author of Legacy of Ashes: The History of the CIA

“A compellingly readable book that not only tells us why drones cannot live up to the overblown expectation of politicians but lucidly explains the vulnerability of intelligence, either robotic or human, better than any book I have ever read.”

– Edward Jay Epstein, author of Deception: The Invisible War Between the KGB and the CIA

“Sharp-eyed and disturbing, especially Cockburn’s concluding assessment that, nourished by an unending flow of money, ‘the assassination machine is here to stay.’”

– Nick Turse, author of Kill Anything That Moves

“In this riveting book, Cockburn puts the reader in the pilot’s seat as kill teams go on their deadly hunts before dashing home for their children’s soccer games. Wrapped in enormous secrecy, the only way past the armed guards and cipher-locks and into this new world of Hellfire diplomacy is Cockburn’s great new read. Rather than voter IDs, people should prove they have read this book before being allowed to vote in the next election.”

– James Bamford, author of The Shadow Factory: The Ultra-Secret NSA frm 9/11 to the Eavesdropping on America

“Provides the ammunition for believing that everything you ever feared or suspected about drone warfare is true.”

Patrick Cockburn: 'Britain is on the verge of entering into a long war in Syria based on wishful thinking and poor information'

The war must go on... Sebastian Budgen on the West's strategy after Paris