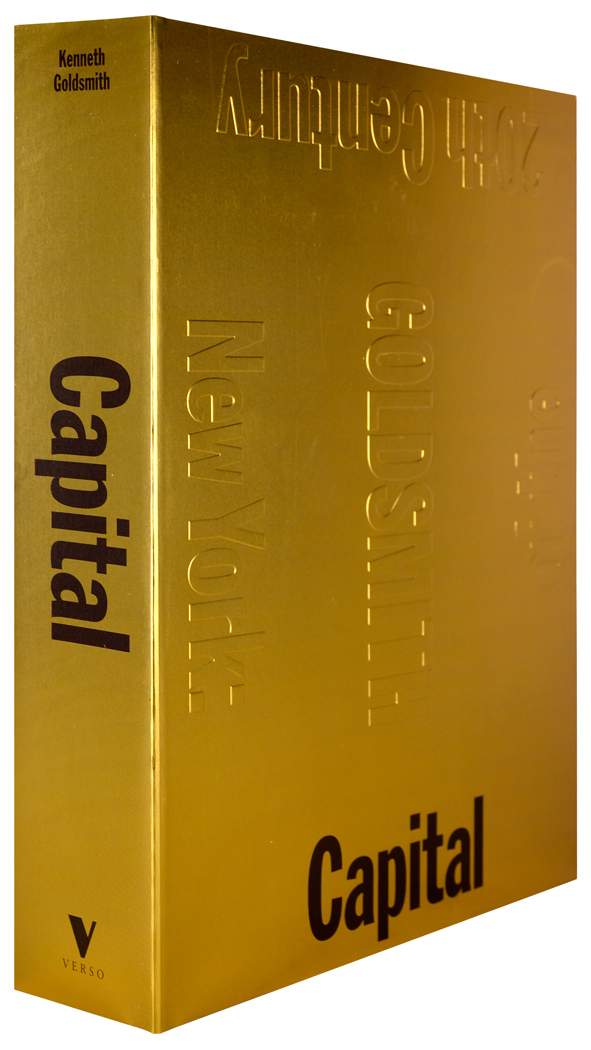 Acclaimed artist Kenneth Goldsmith’s thousand-page beautiful homage to New York City.
Here is a kaleidoscopic assemblage and poetic history of New York: an unparalleled and original homage to the city, composed entirely of quotations. Drawn from a huge array of sources—histories, memoirs, newspaper articles, novels, government documents, emails—and organized into interpretive categories that reveal the philosophical architecture of the city, Capital is the ne plus ultra of books on the ultimate megalopolis.

It is also a book of experimental literature that transposes Walter Benjamin’s unfinished magnum opus of literary montage on the modern city, The Arcades Project, from nineteenth-century Paris to twentieth-century New York, bringing the streets and its inhabitants to life in categories such as “Sex,” “Central Park,” “Commodity,” “Loneliness,” “Gentrification,” “Advertising,” and “Mapplethorpe.”

Capital is a book designed to fascinate and to fail—for can a megalopolis truly ever be captured in words? Can a history, no matter how extensive, ever be comprehensive? Each reading of this book, and of New York, is a unique and impossible project.

“Capital scintillates...Goldsmith has produced a book that reminds us how close we can still get, via the labour of sound and thought and syntax, to the rhythms of a real city.”

“[Goldsmith] gives you the feel of what it is like to be living in New York now.”

“A skyscraper of words—literary, journalistic, poetic, and prosaic—to celebrate and chronicle teeming Gotham. The title alludes to Walter Benjamin, and the conceit is one to do him proud … there is an embarrassment of riches here.”

“Reading Capital feels like walking the city, through time and space, jumping neighborhoods, going in and out of buildings, slipping through wormholes. It's a kind of exuberant eavesdropping on the muttering, shouting narrative of the twentieth-century city.”

“The book is an ever-rising crescendo of voices talking over and past one another inside a very confined space, and together that energy becomes the heat and light that made New York City the 20th century’s most necessary city. Capital is as enriching as it is unwieldy, and a must-read for anyone who has even a little skin in this game. Ultimately, with both New York City and Goldsmith’s book, all you have to do is say “yes”; to begin. Then, suddenly, everything comes at you all at once.”

“Capital is ...meant to be dipped into, to surprise, like a chance encounter on the street. The infinite richness of the city is an apt form for [Goldsmith’s] ambition. Capital is a book to get lost in for hours, like some obscure corner of the Lower East Side; it helps us see the universe in a chunk of asphalt.”

“The spirit of a city constantly wrestled with and romanticized all out of proportion suffuses Capital.”

“Capital could be seen as Goldsmith scaling up, a skewed take on the Great American Novel.”

“[Capital] is an extravagantly complex construction, opening with a cinematic sweep of the city as a dream-like impossibility, then diving down from sky to earth, languishing in the street before digging underground and emerging to the sky, the weather, the atmosphere and, finally, the apocalypse … [Be] astounded by this epic, ten-year effort to shape an impossible portrait of a miraculous city which—as EB White puts it—should never have existed.”

“As massive, intimidating and fascinating as its subject...The book is much like the city it describes: once you start exploring, you won’t want to stop.”

“A fascinating work. Kenneth Goldsmith has set before us a Petronian feast in which every page offers up a toothsome morsel to anyone with an interest in New York and its pre-eminent place in the cultural life of the twentieth century.”

Our definitive collection on Art and Politics.