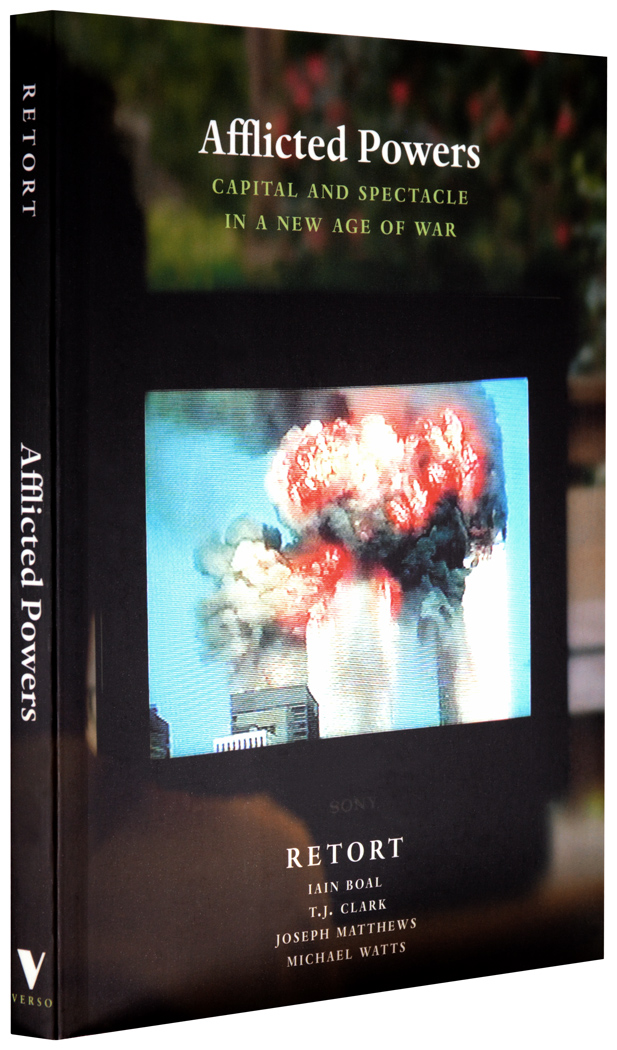 Dissenting intellectuals analyze the collision of military neoliberalism with the politics of the spectacle.

Afflicted Powers is an account of world politics since September 11, 2001. It aims to confront the perplexing doubleness of the presentits lethal mixture of atavism and new-fangledness. The world careers backward into forms of ideological and geo-political combat that call to mind the Scramble for Africa, and the Wars of Religion. But this brute return of the past is accompanied by an equally monstrous political deployment of (and entrapment in) the apparatus of a hyper-modern production of appearances. Capital is on the move again. In the Middle East and elsewhere it is attempting, nakedly, a new round of primitive accumulation and enclosure.

Now, however, it is obliged to do so in unprecedented circumstances. Never before has imperialist victory or defeat depended so much on a struggle for hegemony in the world of images; never before has the dominant world power been subject to real catastrophe in the realm of the spectacle. The present turn to empire and enclosure, what Retort terms military neo-liberalism, is confronted not only by various forms of radical Islam but by a new kind of vanguard armed with the toolkit of spectacular politics. This book attempts to rethink certain key aspects of the current global struggle within this overall perspective, and to provide some critical support for present and future oppositions. Its main themes are the spectacle and September 11, blood for oil, permanent war and illusory peace, the US-Israel relationship, revolutionary Islam, and modernity and terror.

“This provocative and wide-ranging inquiry - part analysis, part manifesto - brings to light a new phase in the historical process of primitive accumulation, a form of bitter class war and social reconstruction now proceeding in the guise of what the authors depict as 'military neo-liberalism'. The conclusions and analysis are brought to bear incisively on central events of the contemporary world, and on how its serious threats can be confronted.”

“A comprehensive analysis of America's relationship with the world. No stone is left unturned. The maggots exposed are grotesque.”

Perpetual War and Permanent Unrest: The Battle of Algiers After 9/11

This essay is excerpted from Sohail Daulatzai's Fifty Years of The Battle of Algiers: Past as Prologue, published by the University of Minnesota Press.

A Survey of Verso's Responses to 9/11