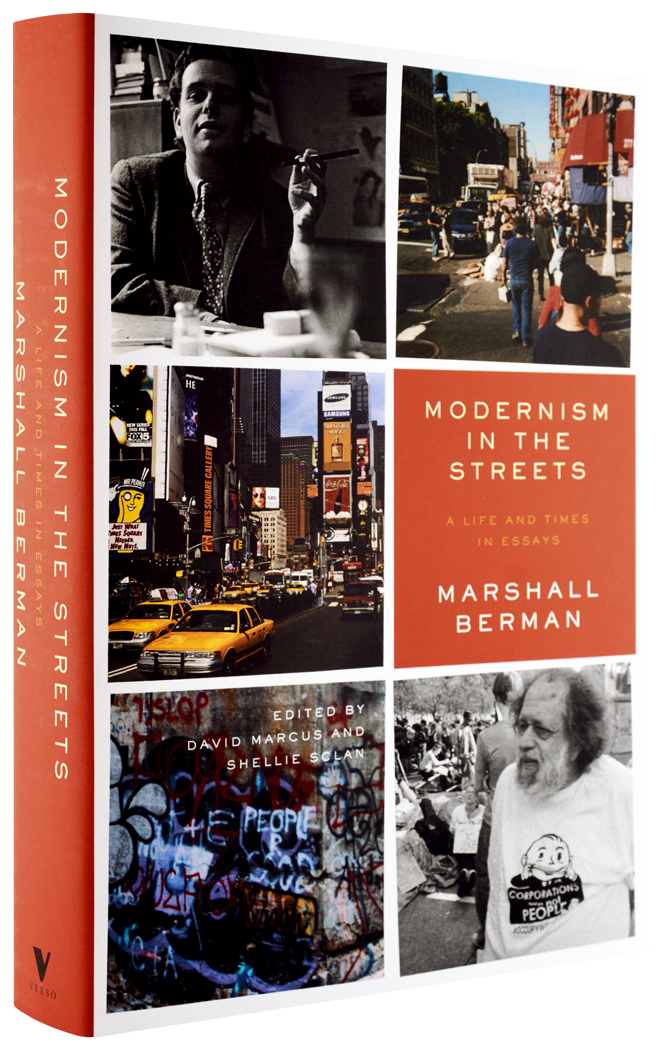 Marshall Berman was one of the great urbanists and Marxist cultural critics of the twentieth and twenty-first centuries, and his brilliant, nearly sui generis book All That Is Solid Melts Into Air is a masterpiece of the literature on modernism. But like many New York intellectuals, the essay was his characteristic form, accommodating his multifarious interests and expressing his protean, searching exuberant mind. This collection includes early essays from and on the radical ’60s, on New York City, on literary figures from Kafka to Pamuk, and late essays on rock, hip hop, and gentrification. Concluding with his last essay, completed just before his death in 2013, this book is Berman’s intellectual autobiography, tracing his career as a thinker through the way he read the “signs in the street.”

“Marshall Berman was our Manhattan Socrates: not the arch dialectician but the philosopher in and of the street, not the aggressive asker of questions but the ambler in the boulevard, the man who seeks wisdom in the agora, in the conversation of Times Square, the walker in the city, the man who died among friends.”

“Marshall resurrected the old medieval maxim Stadtluft macht frei: the air of the city makes us free. He found that freedom everywhere in the busy streets of Manhattan: in the clubs and cafes of Greenwich Village; in the gaudy lights of Times Square; in the Bronx where he grew up, which died and was reborn; in the graffiti scrawled on New York’s subway cars; and in the music of the city, from jazz to Broadway to rap.”

“The departed bard of modernism … He believed dialogue to be an urgent need in modern times because our subjectivity and inwardness have intensified, a state he called both richer and more lonely.”

– Brooke Gladstone, cohost of NPR’s On the Media

“‘Sometimes,’ Berman once said, ‘it sounds as if culture were just one more Department of Exploitation and Oppression, containing nothing luminous or valuable in itself.’ He loved to emphasize the good news about modern life and did so with great lyricism and literary verve.”

– Andy Merrifield, author of The Amateur

– Robert Christgau, author of Going Into the City

“There are other writers as intelligent as Marshall Berman, and as able to draw together disparate elements of cultural history into a dazzling new picture, but they seldom sustain the same sense of compassionate warmth toward those who make history.”

“Modernism in the Streets captures both the violent dislocation wrought by political changes and the artistic outputs born out of suffering. Berman’s essays make the reader experience historical change as he did—as something urgent, frightening, but also wondrous. With that feeling comes a faint but undeniable hint of possibility.”

“A wonderful collection of Marshall's 'life and times in essays,' a treasure trove of five decades’ living and writing for the city, lovingly consecrated by Dissent and Nation editor David Marcus, all done with the blessing of Marshall’s widow, Shellie. At last those books-in-progress have been consummated as an organic whole; the incomplete has been posthumously assembled in One Bright Book of Marshall's Life...Modernism in the Streets makes Marshall whole again, keeps him living, and gives us a new beginning, a genesis.”

“It is the broadness and scale of Berman’s vision of modernity that is the power of this collection.”

“Modernism in the Streets is a comprehensive testament to singular style with which Berman espoused, with equal urgency and earnestness, the tragedies and triumphs of modernity, and its continuing impact on the ways we navigate urban space.”