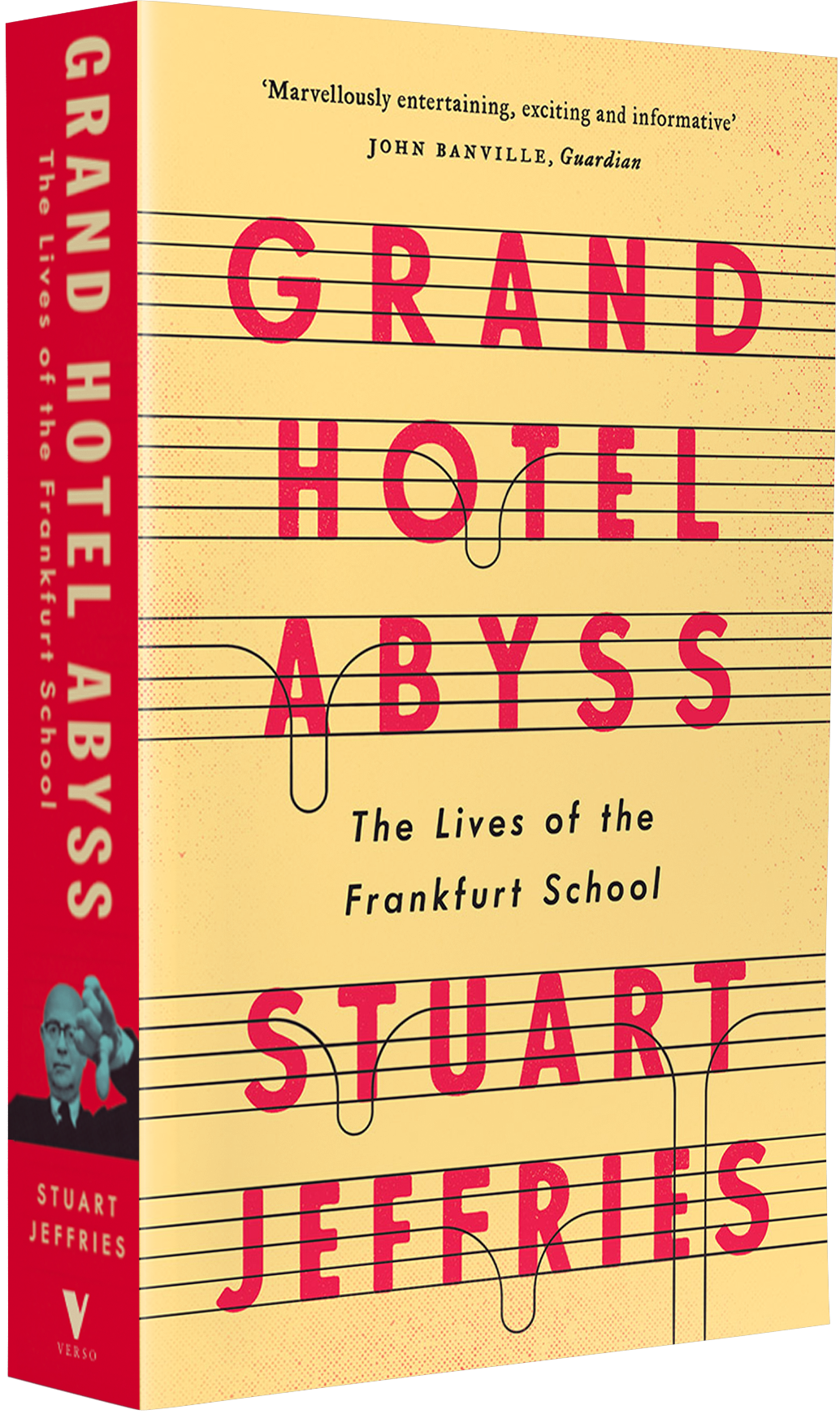 Who were the Frankfurt School—Benjamin, Adorno, Marcuse, Horkheimer—and why do they matter today?

In 1923, a group of young radical German thinkers and intellectuals came together to at Victoria Alle 7, Frankfurt, determined to explain the workings of the modern world. Among the most prominent members of what became the Frankfurt School were the philosophers Walter Benjamin, Theodor Adorno, Max Horkheimer, and Herbert Marcuse. Not only would they change the way we think, but also the subjects we deem worthy of intellectual investigation. Their lives, like their ideas, profoundly, sometimes tragically, reflected and shaped the shattering events of the twentieth century.

Grand Hotel Abyss combines biography, philosophy, and storytelling to reveal how the Frankfurt thinkers gathered in hopes of understanding the politics of culture during the rise of fascism. Some of them, forced to escape the horrors of Nazi Germany, later found exile in the United States. Benjamin, with his last great work—the incomplete Arcades Project—in his suitcase, was arrested in Spain and committed suicide when threatened with deportation to Nazi-occupied France. On the other side of the Atlantic, Adorno failed in his bid to become a Hollywood screenwriter, denounced jazz, and even met Charlie Chaplin in Malibu.

After the war, there was a resurgence of interest in the School. From the relative comfort of sun-drenched California, Herbert Marcuse wrote the classic One Dimensional Man, which influenced the 1960s counterculture and thinkers such as Angela Davis; while in a tragic coda, Adorno died from a heart attack following confrontations with student radicals in Berlin.

By taking popular culture seriously as an object of study—whether it was film, music, ideas, or consumerism—the Frankfurt School elaborated upon the nature and crisis of our mass-produced, mechanised society. Grand Hotel Abyss shows how much these ideas still tell us about our age of social media and runaway consumption.

“Attempts something rather daring … An easily accessible, funny history of one of the more formidable intellectual movements of the 20th century … an easy, witty, pacy read”

“Throughout the book, Jeffries demonstrates that he is comfortable and conversant with the often thorny philosophical ideas of his subjects. A rich, intellectually meaty history.”

“Jeffries moves swiftly across the decades, retracing the jagged paths from the official founding of the Institute for Social Research in Frankfurt in June 1924, through its years in exile in New York in the ’30s and Los Angeles in the ’40s and its hasty return to Frankfurt in the early postwar years, up to the work of Horkheimer and Adorno’s prized protégé Jürgen Habermas and the Institute’s legacy today.”

“Equally sympathetic and critical, this book is sure to gain an enthusiastic reception from academics, arm chair philosophers, and fellow travelers.”

“This seemingly daunting book turned out to be an exhilarating page-turner…Grand Hotel Abyss is an outstanding critical introduction to some of the most fertile, and still relevant, thinkers of the 20th century.”

“If the laments of the critical theorists are to make a comeback, a new book by Guardian columnist Stuart Jeffries might help lead it. A group biography of the Frankfurt intellectuals, Grand Hotel Abyss: The Lives of the Frankfurt School ought to draw attention to a tradition of thought that, while manifestly flawed, feels depressingly relevant.”

“A towering work of staggering scholarship.”

“A fractious Europe, a failing currency, a challenged economy, populist parties on the rise, a divided left, migration from the east, an atmosphere of fear combined with social and sexual liberalism. The parallels between Britain today and Germany in the 1920s may well make this a compelling moment to revisit those postwar German thinkers who gathered in what was known as the Frankfurt school for social research – something akin to a Marxist thinktank, though one whose policy papers and brilliant books fed future generations as much or more than their own ... Little wonder, given the history of the 20th century, that the Frankfurt school gave us intellectual pessimism and negative dialectics. Jeffries’s biography is proof that such a legacy can be invigorating.”

“Reading Jeffries’ group biography of the Frankfurt School underscores just how much has changed in the climate of intellectual debate over the past century … Jeffries has emerged from his research and writing as a bit of a critical theorist himself.”

“Stuart Jeffries has produced a compelling and politically pressing group portrait of the philosophers associated with the Frankfurt School. Their thinking has never seemed less forbidding and more inspiring.”

“There is much to provoke interest and thought, even entertain, in Jeffries’ informative account of a group of highly intelligent observers and analysts of the imprisonment of humanity, both socially and individually by the corrosive system under which it suffers.”

“Intriguing and provocative … Jeffries has done a great service in producing such a readable, wry and detailed introduction.”

“A valuable introduction to the lives and ideas of an influential group of 20th century philosophers. I recommend it to anyone who wants to understand why much of what passed for radical thought in academia in the late 20th century was so obscure and depressing.”

“[Gives] a step by step insight into what they thought … A lot of that stuff they wrote about still applies.”

“An engaging and accessible history of the lives and main ideas of the leading thinkers of the Frankfurt School.”

“Humanises some of the most austere, (philosophically) negative, and intellectually intimidating thinkers of the past century … Jeffries draws out the intense and evolving relationship between these idiosyncratic theorists and their work, and eloquently illuminates the extent to which crude contingency shaped their philosophies and output. Jeffries succeeds in making this a truly personal, truly human illumination, be it presenting Marcuse’s letters addressing Adorno ‘dear Teddy,’ or Adorno signing off his missives to his parents affectionately, with ‘heartiest kisses from your Hippo King.’”