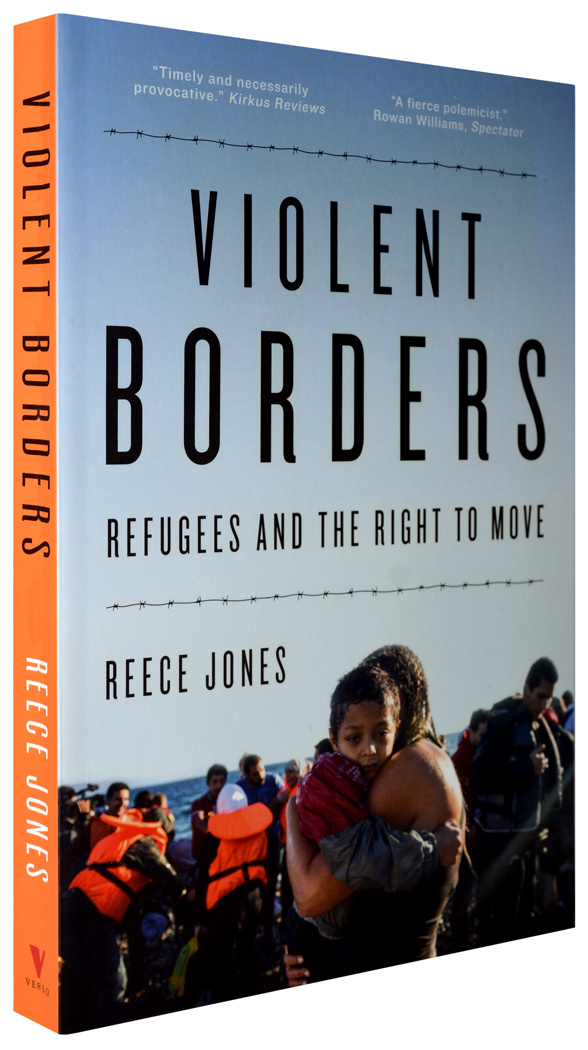 A major new exploration of the refugee crisis, focusing on how borders are formed and policed

Forty thousand people have died trying to cross between countries in the past decade, and yet international borders only continue to harden. The United Kingdom has voted to leave the European Union; the United States elected a president who campaigned on building a wall; while elsewhere, the popularity of right-wing antimigrant nationalist political parties is surging.

Reece Jones argues that the West has helped bring about the deaths of countless migrants, as states attempt to contain populations and limit access to resources and opportunities. “We may live in an era of globalization,” he writes, “but much of the world is increasingly focused on limiting the free movement of people.”

In Violent Borders, Jones crosses the migrant trails of the world, documenting the billions of dollars spent on border security projects and the dire consequences for countless millions. While the poor are restricted by the lottery of birth to slum dwellings in the ailing decolonized world, the wealthy travel without constraint, exploiting pools of cheap labor and lax environmental regulations. With the growth of borders and resource enclosures, the deaths of migrants in search of a better life are intimately connected to climate change, environmental degradation, and the growth of global wealth inequality.

Newly updated with a discussion of Brexit and the Trump administration.

“I'd like an endless supply of Reece Jones’ Violent Borders to hand out to all the people I meet who flirt with an anti-refugee sensibility. This book is the antidote to the world of walls that we live in, an argument for a world of humanity.”

– Vijay Prashad, author of The Poorer Nations: A Possible History of the Global South

“A much-needed counter to a thousand newspaper columns calling on us to secure our borders, Reece Jones’ Violent Borders goes beyond the headlines to look at the deeper causes of the migration crisis. Borders, Jones convincingly argues, are a means of inflicting violence on poor people. This is an engaging and lucid analysis of a much misunderstood issue.”

– Arun Kundnani, author of The Muslims Are Coming: Islamophobia, Extremism, and the Domestic War on Terror

“From early modern land enclosures through Westphalian state formation to the current fortification of the US–Mexico frontier, Reece Jones explains what a boundary is, and how national sovereignty is being reinforced, in an age of capital mobility, by the crackdown on human movement across borders.”

– Jeremy Harding, author of Border Vigils: Keeping Migrants Out of the Rich World

“With the building of border walls and the deaths of migrants much in the news, this work is both timely and necessarily provocative.”

“In an era of terrorism, global inequality, and rising political tension over migration, Jones argues that tight border controls make the world worse, not better.”

“Reece Jones, a professor of Geography at the University of Hawaii at Manoa, believes that borders are essentially tools of violence used to constrict and sometimes entirely stop flows of humanity. And Jones has the facts to back up this radical assertion … This book is a valuable antidote to the xenophobia sweeping the privileged nations of the Northern Hemisphere.”

“Violent Borders: Refugees and the Right to Move goes beyond most considerations of refugee history to consider how new borders are formed and policed, and how state attempts to contain and control populations and allocate resources have resulted in many limits to peoples' movements around the world … A powerful survey that should be a 'must' for any social issues collection.”

“Violent Borders puts questions of movement and intrastate inequality in a historical perspective that once glimpsed cannot be unseen. It firmly, and convincingly, maintains that borders are nothing more than state tools for maintaining control of resources and populations, the beneficiaries of which are often the rich while those who suffer its intrinsically violent wrath are the poor who seek safety within its walls…An excellent read.”

“Promise[s] to take your arguments from the general to the specific … The United States is one of a few countries whose immigration philosophy is jus solis or right of land, which means that if you spend enough time on U.S. territory you have a right to citizenship. But who has that right and if it matters how they entered is our all-consuming question. In Violent Borders, Jones provides plenty of examples of how these semantic arguments lead to inequality, isolation, racism, and institutional loss of liberty for entire groups of people.”

“Though the movement of people and the tightening of borders continue to be hotly debated throughout the world, Jones's book is successful in providing careful historical and present-day examples for his analysis and thought-provoking arguments about the need to soften borders.”