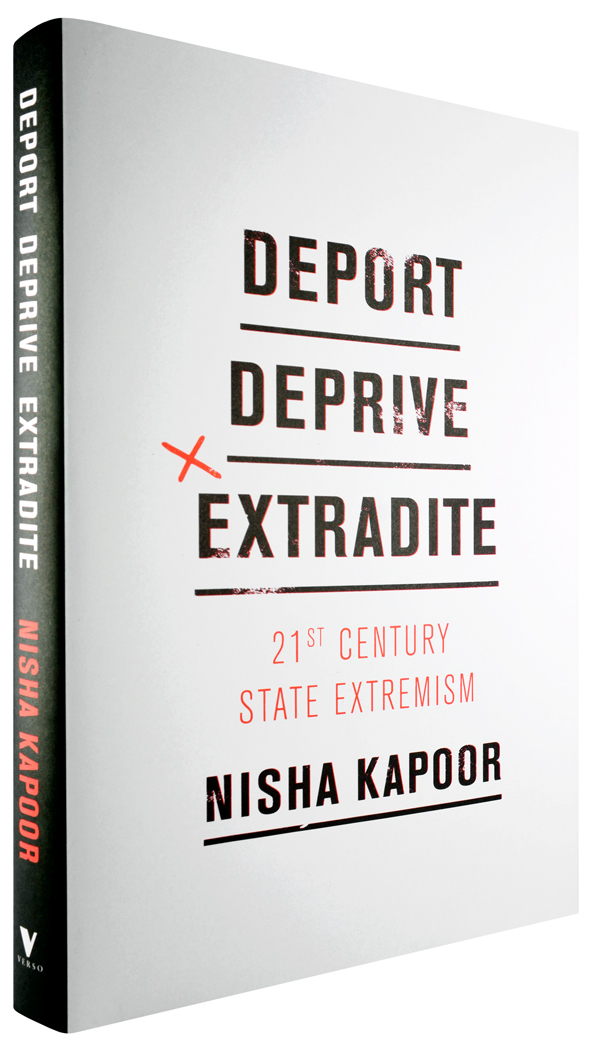 In 2012 five Muslim men—Babar Ahmad, Talha Ahsan, Khalid al-Fawwaz, Adel Abdul Bary, and Abu Hamza—were extradited from Britain to the US to face terrorism-related charges. Fahad Hashmi was deported a few years before. Abid Naseer and Haroon Aswat would follow shortly. They were subject to pre-trial incarceration for up to seventeen years, police brutality, secret trials, secret evidence, long-term detention in solitary confinement, citizenship deprivation and more. Deport, Deprive, Extradite draws on their stories as starting points to explore what they illuminate about the disciplinary features of state power and its securitising conditions.

In looking at these stories of Muslim men accused of terrorism-related offences, Nisha Kapoor exposes how these racialised subjects are dehumanised, made non-human, both in terms of how they are represented and via the disciplinary techniques used to expel them. She explores how these cases illuminate and enable intensifying authoritarianism and the diminishment of democratic systems.

“Nisha Kapoor has written a searing indictment of the expansive securitizing state and the racially driven authoritarianism out of which it grows and which it reinforces. A book that more than any other details the crippling impacts of politicized extradition on all those directly subjected to it as well as on social justice more generally. A must-read for all concerned about the secretive erosion of civil liberties and democratic life being carried out in the name of the ‘War on Terror.’”

“A monumental study of how the ‘War on Terror’ has allowed states to operate outside the boundaries of reason and decency. This is courageous research, a book that should be read by all citizens of 21st century states that claim to be fighting extremism but have themselves become extremist states.”

– Vijay Prashad, author of The Poorer Nations: A Possible History of the Global South

“Kapoor gives us a precise, relentless, fearless analysis of a key space within which state racism has been cultivated. Deport, Deprive, Extradite is crucial to grasping a very British style of authoritarianism.”

– Arun Kundnani, author of The Muslims Are Coming

“Nisha Kapoor’s work is extraordinarily important, shining a torch on the deep structures of racism that infuse the security state. As the rhetoric of the War on Terror recedes, her research reveals the architecture of punitive practices that now link counterterrorism policing to border control. Her investigations into the new state powers to detain and deport are matched by a concern for the families and communities of those who are targeted, giving an eloquent voice to those who are rarely heard.”

– Vron Ware, author of Beyond the Pale

“Gripping, frightening, urgent—Nisha Kapoor’s book is essential reading for anyone trying to understand the shifting terrain of securitisation, racialisation and the rolling back of human rights. It should be required reading for every student, teacher and advocate concerned to challenge state racism. For those inclined to trust the government, this book reveals the hidden and not so hidden injustices carried out in y/our name. For those who find themselves in the sights of a securitising state, this book lets you know that you are not alone. For anyone who doubts that the treatment of those suspected of terrorism reveals a shift in state practices that can seep out into other realms, this book offers a careful but devastating warning. We understand, what can be done to them can be done to us. After this book, none of us can pretend again that we did not know.”

Verso at The World Transformed 2019

To celebrate the launch of The World Transformed 2019 programme we're offering 50% off all our essential Labour reading!

Citizenship deprivation at the nexus of race, gender and geopolitics

The case of Shamima Begum, the nineteen year-old who ran away to Syria from her home in East London in 2015, is now well known. Yet, the most striking thing about it is not the enactment of the deprivation of her citizenship but the scale of media attention it has received. In this essay, Nisha Kapoor puts the actions of the British state against Begum in its political and historical context.