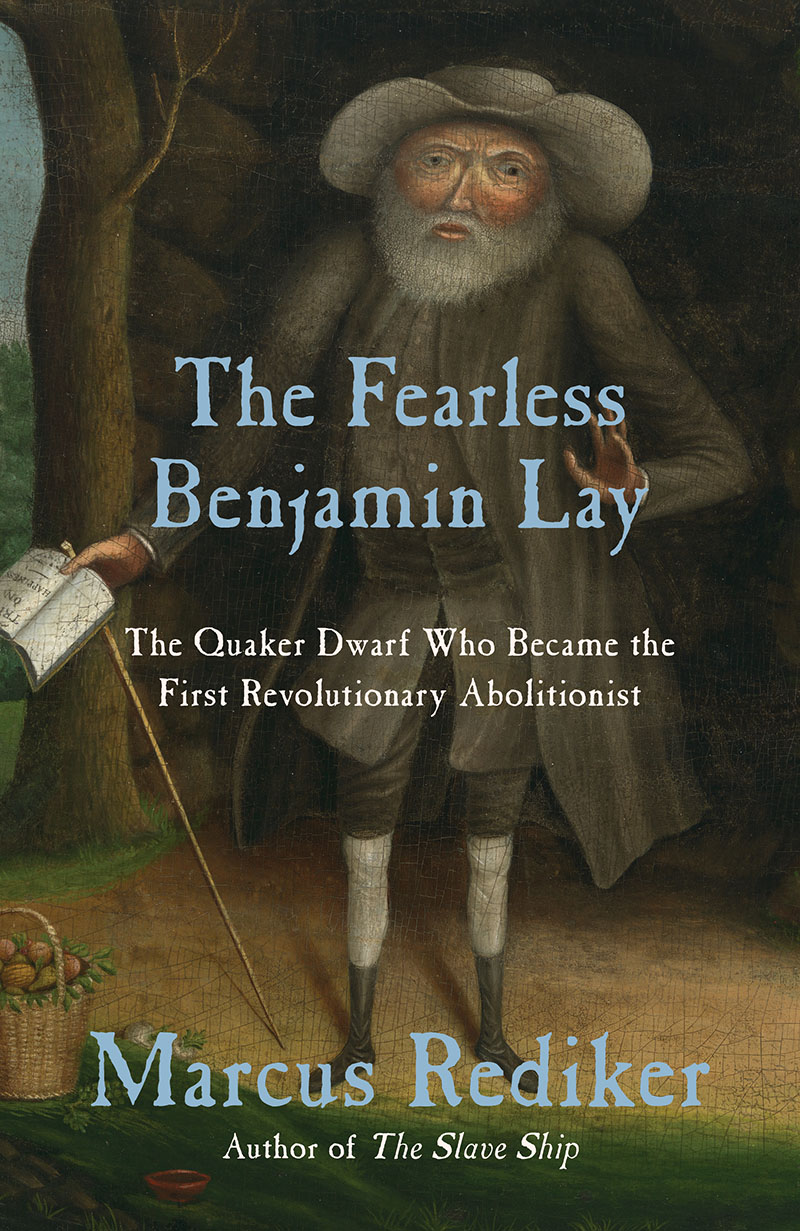 The Fearless Benjamin Lay chronicles the transatlantic life and times of a singular and astonishing man—a Quaker dwarf originally from Essex who became one of the first people ever to demand the total, unconditional emancipation of all enslaved Africans around the world. He performed public guerrilla theatre to shame slave masters, insisting that human bondage violated the fundamental principles of Christianity. He wrote a fiery, controversial book against slavery that Benjamin Franklin published in 1738. He lived in a cave, made his own clothes, refused to consume anything produced by slave labour, championed animal rights, and embraced vegetarianism. He acted on his ideals to create a new, practical, revolutionary way of life.

“Admirers of Marcus Rediker’s splendid The Slave Ship will be delighted by this historian’s new book. Sailor, pioneer of guerrilla theater, and a man who would stop at nothing to make his fellow human beings share his passionate outrage against slavery, Benjamin Lay has long needed a modern biographer worthy of him, and now he has one.”

“A modern biography of the radical abolitionist Benjamin Lay has long been overdue. With the sure hand of an eminent historian of the disfranchised, Marcus Rediker has brought to life the wide-ranging activism of this extraordinary Quaker, vegetarian dwarf in a richly crafted book. In fully recovering Lay’s revolutionary abolitionist vision, Rediker reveals its ongoing significance for our world.”

– Manisha Sinha, author of The Slave’s Cause: A History of Abolition

“The unswerving eighteenth-century abolitionist Benjamin Lay, maligned when not ignored for many generations, has at last found his sympathetic biographer. In this captivating must-read book, Marcus Rediker shows that Lay’s disfigured body contained a mind of steel and a heart overflowing with compassion for victims of the Atlantic slave trade. Lay’s place in the annals of American reform is now secure.”

“Lay’s antinomian radicalism has been wonderfully excavated by Marcus Rediker in this eloquent testament.”

“This turbulent life of a seafarer, glove maker, and preacher is the stuff of legend, recovered with panache by Rediker.”

“In this vivid life, Rediker explains how Benjamin Lay, the dwarf, became an iconic prophet of abolitionism. Lay lived in the utmost simplicity in a cave, eating no meat, and wearing only clothes he had made himself. Rediker shows how Lay, despite his modesty, used spectacle to dramatise the cruelty of slavery, and explains why, despite clashes with the wealthy, Lay died at seventy-seven with an estate worth over £500, which he bequeathed to the poor. The Fearless Benjamin Lay offers a master class in eighteenth-century radical micro-history, showing how much is revealed by the scattered details of one man’s life, a short man but a political and moral giant.”

“Like most satisfying biographies, Rediker’s is part group biography, offering sketches of the lives with which Lay's intersected.”

“It is a pretty safe bet that for every 1,000 people who know of William Wilberforce, no more than the odd one might have heard of Benjamin Lay. But if anyone deserves to muscle in on the mildly self-congratulatory and largely middle-class pantheon of Abolitionist Saints, it is the gloriously improbable and largely forgotten Quaker throwback and hero of Marcus Rediker's generous and absorbing act—his own phrase—of 'retrospective justice'.”

“Rediker has done a valuable service in rescuing Lay from obscurity ... I suspect there will be few readers who won’t want to boil a celebratory turnip to salute what Benjamin Lay achieved in the course of his long and remarkable life.”

“This is micro-history at its best, a careful concentration on one small man’s activities as a way of testing out the limits of what could be thought, known and felt in the hive-mind of early modern America.”

“It is a pretty safe bet that people reading this excellent biography of the Quaker radical Benjamin Lay will not have heard of him or his exploits. Hopefully because of Marcus Rediker’s hard work and perseverance more people will now know of this extraordinary figure.”

– Keith Livesy, A Trumpet of Sedition

Video: Marcus Rediker — History from Below after the Transnational Turn: The Case of a Forgotten 18th-century Revolutionary

Marcus Rediker on the life of Quaker abolitionist Benjamin Lay and the methods of "history from below."

In 1738, radical abolitionist and Quaker dwarf Benjamin Lay was disowned by the Quaker community. He was well known for his uncompromising and confrontational stance against slavery and his commitment to convince his fellow Quakers to completely denounce and abolish it. Nearly three hundred years later, history is finally looking up for Lay.