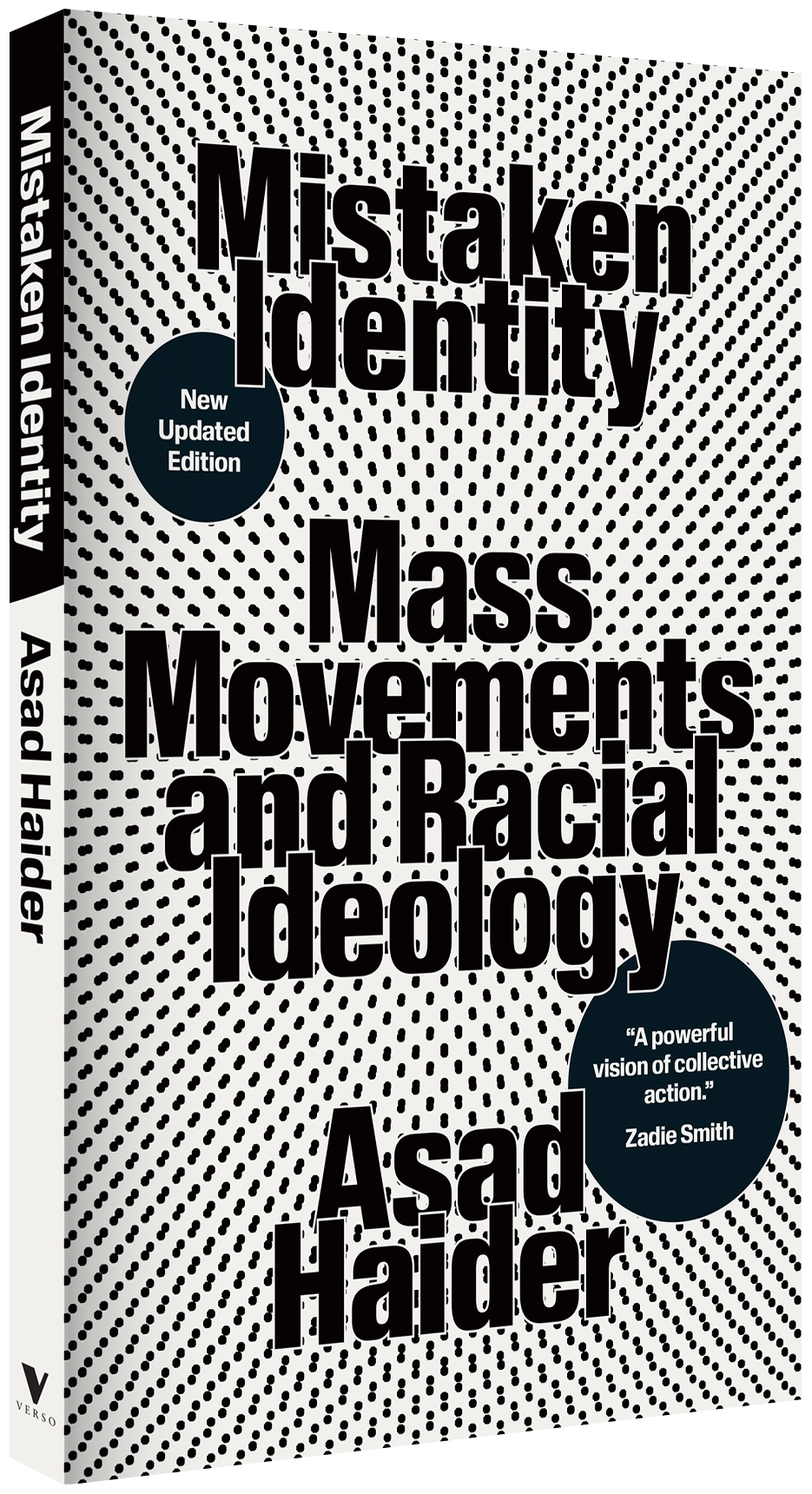 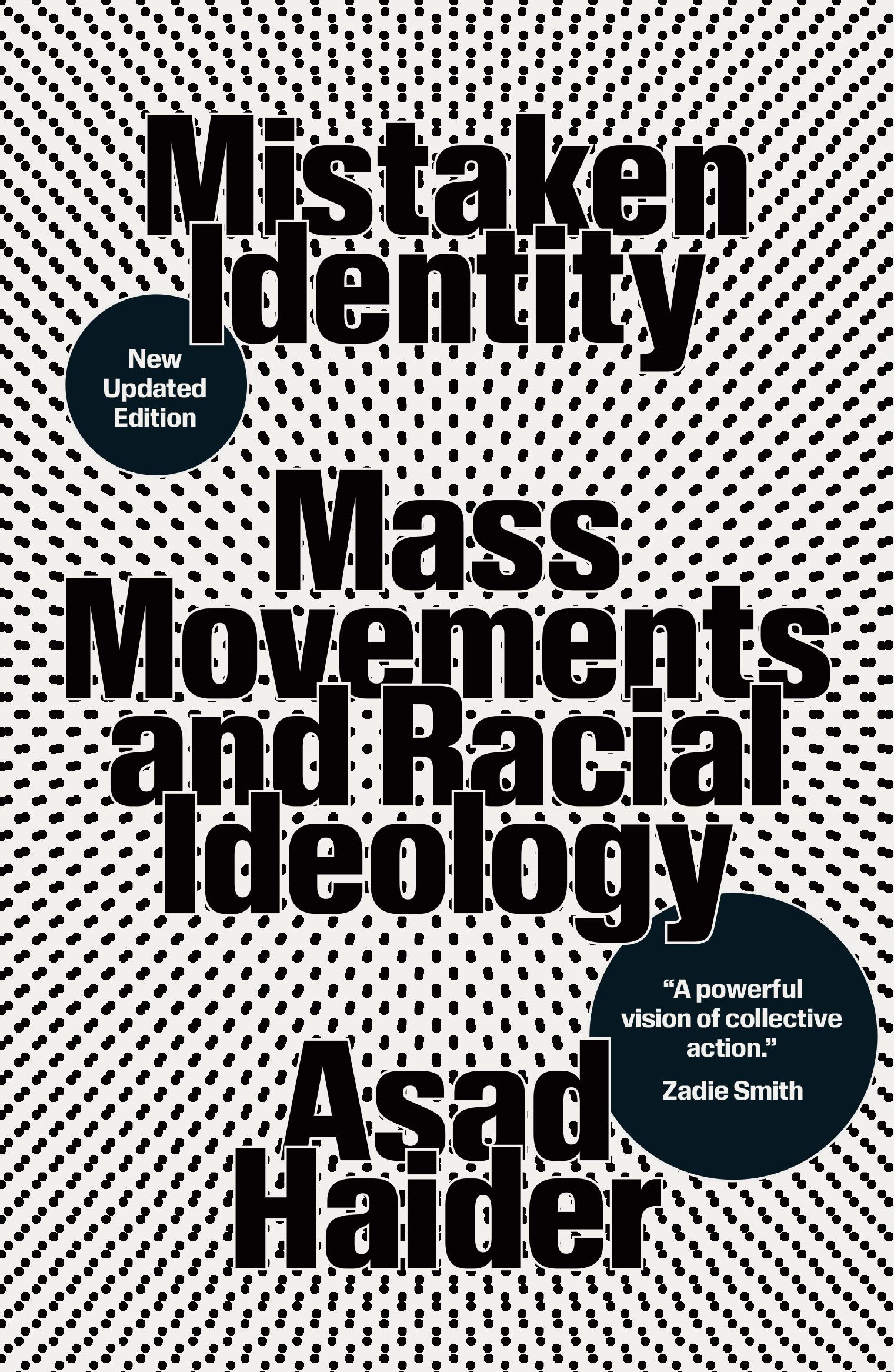 Whether class or race is the more important factor in modern politics is a question right at the heart of recent history’s most contentious debates. Among groups who should readily find common ground, there is little agreement. To escape this deadlock, Asad Haider turns to the rich legacies of the black freedom struggle. Drawing on the words and deeds of black revolutionary theorists, he argues that identity politics is not synonymous with anti-racism, but instead amounts to the neutralization of its movements. It marks a retreat from the crucial passage of identity to solidarity, and from individual recognition to the collective struggle against an oppressive social structure.

Weaving together autobiographical reflection, historical analysis, theoretical exegesis, and protest reportage, Mistaken Identity is a passionate call for a new practice of politics beyond colorblind chauvinism and “the ideology of race.”

“Asad Haider offers a clarifying and frank assessment of the left's evacuation of class from our identity debates, as well as a powerful defense of political solidarity across hierarchies of race. Drawing on the radical legacy of anti-racist movements—from the Black Panthers to the Combahee River Collective—Mistaken Identity puts forward a powerful vision of collection action, that should offer hope and inspiration to a new generation of activists.”

“Asad Haider renews the critique of identity politics for the contemporary Left. Drawing on the work of British cultural studies, black feminism, and theories of the subject (and subjection), Haider writes in an open and persuasive prose to show how identity is always partial and ambivalent, deflecting from the larger racial ideologies while reproducing its terms. This is a fresh and timely book, thoughtful and provocative.”

– Judith Butler, author of Gender Trouble and Frames of War

“Mistaken Identity will inspire some, piss off others, and compel all of us to reconsider how we fight back. A bold, fresh, and radical critique of so-called “identity politics,” this book deserves a wide reading—especially now, when liberal multiculturalism, the “renaturalization” of capitalism, and a resurgent bourgeois black nationalism draped in radical language forecloses the possibility of revolutionary solidarity. Asad Haider proclaims another universality is possible, and it’s probably not what you think.”

“Riveting. Haider moves deftly over difficult terrain. His prose is precise and propulsive. His Marxism is not a mausoleum but a living, breathing thing. And he writes as both a militant and a theorist, one who believes that theory is integral to political struggle and that theoretical rigour has political stakes. The American left has shown signs of life recently, but it has no shortage of enemies. Defeating them will require, among other things, ideas. Haider’s book contributes several. We will need more.”

“Reviving what has become a deeply unfashionable anti-racist standpoint, Asad Haider indicts the complicity of “identity politics” from the left. For him, the dissident mentalities and meticulous historical methods of open-ended, ecumenical commitment to radical social transformation are still valid. This spiky little book shows how opposition might be salvaged from an ocean of pessimism and despair.”

– Paul Gilroy, author of The Black Atlantic and There Ain’t No Black in the Union Jack

“Mistaken Identity by Asad Haider considers a more nuanced and multifaceted debate about identity politics, one that critiques the mass-media version while being cognizant of the larger threat posed by the identity politics being trafficked from the White House….Haider demonstrates that being of two minds—or even of three, four or five—does not necessarily imply confusion, but a complex worldview whose seemingly disparate parts are seeking integration.”

“Asad Haider’s critique of contemporary identity politics is convincing. He is right: it is not revolutionary, and it is not 'the answer’.”

“Asad Haider offers a devastating and constructive critique of what is commonly understood as “identity politics,” while still maintaining the centrality race, racism and racist oppression in capitalism.”

“Pithy, smart and readable, Mistaken Identity is a wonderful book for our time. Notwithstanding his critique of identity, there is a compelling authenticity to Haider's voice, making him someone one wants to think with about shaping a left vision today.”

– Wendy Brown, author of States of Injury and Undoing the Demos

“[Haider] constructs a comprehensive and critical dissection of identity politics in his hard-hitting debut … This book is an important contribution to discourses on American politics, race, and social movements.”

“Essential reading for anyone interested in bringing socialist ideas into movements against racism today.”

“Asad Haider has written a brief and informed survey and critique of the inherent flaws in identity politics. It convinces the reader through a measured calm, not polemics, and that’s a refreshing change in these troubled times.”

“For a slim book, Haider’s argument is expansive and philosophically challenging. Although he never overwhelms the reader with unexplained jargon, the range of work he engages with is impressive, including that of Althusser, Judith Butler, Wendy Brown, Paul Gilroy, Stuart Hall, and more. Moving through this material with skill and acumen, Haider sets out to undercut the material and philosophical foundations of identity politics (and the idea of identity itself).”

“Mistaken Identity is a refreshing and timely answer to the rupturing status quo that flows within the popular movements of our day. Haider’s critique of liberal identity politics cuts through the fog that has been raised by opportunists who seek to divide popular movements. His insurgent universality could become a potentially useful way of thinking through the identity politics that seek to divide rather than reconstitute our movements into a larger program with demands for a better world for all of us.”

“Short and readable, the book provides an intellectual genealogy of anti-racism and of the myriad ways in which contemporary anti-racist politics go awry.”

“Lucid, compact, and fiercely polemical, Asad Haider’s book Mistaken Identity identifies a desperate need for greater political solidarities and broader coalitions at a time when left political movements are governed largely by the logic of ‘staying in your lane,’ which poses a significant barrier to mass organizing in the United States.”