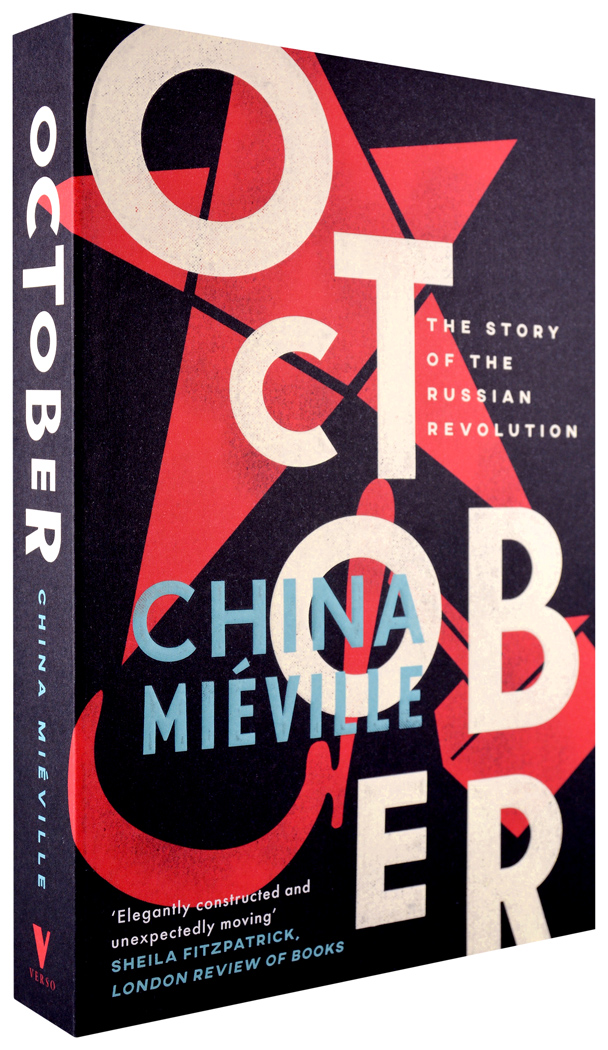 On the centenary of the Russian Revolution, China Miéville tells the extraordinary story of this pivotal moment in history.

In February of 1917 Russia was a backwards, autocratic monarchy, mired in an unpopular war; by October, after not one but two revolutions, it had become the world’s first workers’ state, straining to be at the vanguard of global revolution. How did this unimaginable transformation take place?

In a panoramic sweep, stretching from St Petersburg and Moscow to the remotest villages of a sprawling empire, Miéville uncovers the catastrophes, intrigues and inspirations of 1917, in all their passion, drama and strangeness. Intervening in long-standing historical debates, but told with the reader new to the topic especially in mind, here is a breathtaking story of humanity at its greatest and most desperate; of a turning point for civilisation that still resonates loudly today.

“This gripping account is a re-enactment of the Russian Revolution … His writing can be as passionate as that of the poets of the time: Alexander Blok, Mikhail Kuzmin, Marina Tsvetaeva, to mention some of those quoted here. Miéville’s own special effects are of a piece with them.”

“Miéville is an ideal guide through this complex historical moment, giving agency to obscure and better-known participants alike, and depicting the revolution as both a tragically lost opportunity and an ongoing source of inspiration.”

“To give a new generation of readers a fresh account of the great revolution, incorporating all the post-1989 archival discoveries and scholarly research, is a singularly daunting task. To render it in vivid, oracular prose, moving across the pages with the gathering force of a hurricane, is something that only China Miéville could achieve.”

“Miéville presents the action with his novelist’s eye … An intriguing march to revolution, told here with clarity and insight.”

“There are delightful grace notes here over and above a brisk and perceptive narrative.”

“Readers will be satisfied that October gives them the literary equivalent of bearing witness to world history.”

“It’s as if John Reed, author of the classic piece of revolutionary journalism, Ten Days That Shook the World, woke from a decades-long sleep to tell the story of 1917 once again.”

“Miéville sifts through the extraordinary disagreements, debates, and debacles that accompanied the Russian reds on every step of the road to revolution … He's especially evocative when he chronicles the scenes on the chaotic streets. But much of the value of October comes in his mastery of how the intricacies of human decision-making play out in Petrograd, Moscow, and beyond.”

“An exciting account of the revolutionary moment … well-argued and elegiac”

“[An] engaging retelling of the events that rocked the foundations of the twentieth century.”

“In October, Miéville provides an introduction to one of the seminal events of the 20th century — the overthrow of the Romanov dynasty and the establishment of the world’s first communist state 100 years ago this year … It has all the makings of a novel, and Miéville’s narrative builds toward its crescendo as the Bolsheviks prepare to take power.”

“Miéville’s understanding of the intricacies and underlying absurdities of party politics is unmatched…A rich and compelling book.”

“This is a very fine book—in some ways, I believe, the best work that China Miéville has produced since the three thick volumes of the Bas-Lag trilogy. Indeed, October bears, in certain respects, a deeper affinity to those novels than to anything else he has published since; and it thus provides a convenient opportunity to take stock of the Miéville oeuvre to date … That [October] is an excellent work of art there is no doubt whatever.”

“Miéville, known for his extravagantly weird science fiction and fantasy, is a virtuosic storyteller; here he conjures a society convulsing on the verge of total transformation while staying squarely within the lines of the historical record. Reading this blow-by-blow account of revolution now, when political life is stranger than any fiction, is galvanizing.”

“There are workers, there are peasants, there are soldiers, there are parties, there are tsars, there are courtiers. Each of them bears his or her class position, his or her economic and other concerns, but it is the political field itself, how it hurls its protagonists into combat, combat with its own rules and norms, its own criteria for success and failure, that is front and center here. This may be the most textured, most concrete, account of what political contest and political combat, literal and metaphoric, feels like.”

“October’s dramatic narrative makes the case that the effort is still worth it—that we must dare to dream, even if we risk conjuring more nightmares in this darkening world.”

“As an outstanding piece of literature, China Miéville’s October belongs on the same shelf as John Reed’s eyewitness classic Ten Days That Shook the World, but even more it belongs in the hands of activists who will be shaking the world in the twenty-first century.”

“There is interest in reading the story of ‘that violent and incomparable year’ told by one who hopes against hope that it could happen again.”

“China Miéville’s literary retelling—made to feel like a novel, but scrupulously sourced to real events—captures the vertigo of 1917’s encounter between massive historical forces, plunging us back into the heart of a far-reaching social upheaval, in which time flowed backward and forward even as it marched inexorably forward toward a future that was radically unknown.”

“Even though you know the ending, this is a compulsive page-turner that makes the period come alive in rich, colourful detail. Although he is better known for his science fiction, Miéville’s eye here fleshes out both the spirit of revolution and the horrors that followed. His feelings are evidently complex, which leads to a narrative that draws out elements often left out of more traditional renderings of the Revolution.”

“A century on, the nature of the Russian Revolution remains hotly contested, both within and outside of leftist circles. Miéville, a master storyteller, makes a powerful case in his first nonfiction work that the Bolsheviks’ October success should not be disavowed as the onset of disaster but looked to as an inspirational moment in a grand narrative of human liberation.”

“The story is old but Miéville retells it with verve and empathy. He brilliantly captures the tensions of coup and counter-coup and the kaleidoscope of coalitions that formed and then broke.”

“An inspirational account that lends itself to troubled times.”

“October, by the British author China Miéville, is a gripping account of the Russian Revolution that offers the pleasures and rewards of a great novel … The book has vividly drawn characters, high drama, suspense, and an irresistible narrative momentum that sweeps the reader along from the first page to the tragic—but not inevitable—conclusion … a masterful work.”

“Miéville’s account of the events of 1917 in Petrograd is fast-paced, well-written, and eminently readable. In Miéville's telling the Russian revolution of exactly a century ago comes alive. This is the book's primary accomplishement: to recreate the atmosphere of the time trhough a dramatic retelling of osme of the events.”

“China Miéville’s October writes an accurate history of the Russian Revolution almost as if it was science fiction – like an alternate history that actually happened, which is how it strikes us now - and achieves a vivid depiction of a gigantic social upheaval without losing sight of agency and decision at every level of the process.”