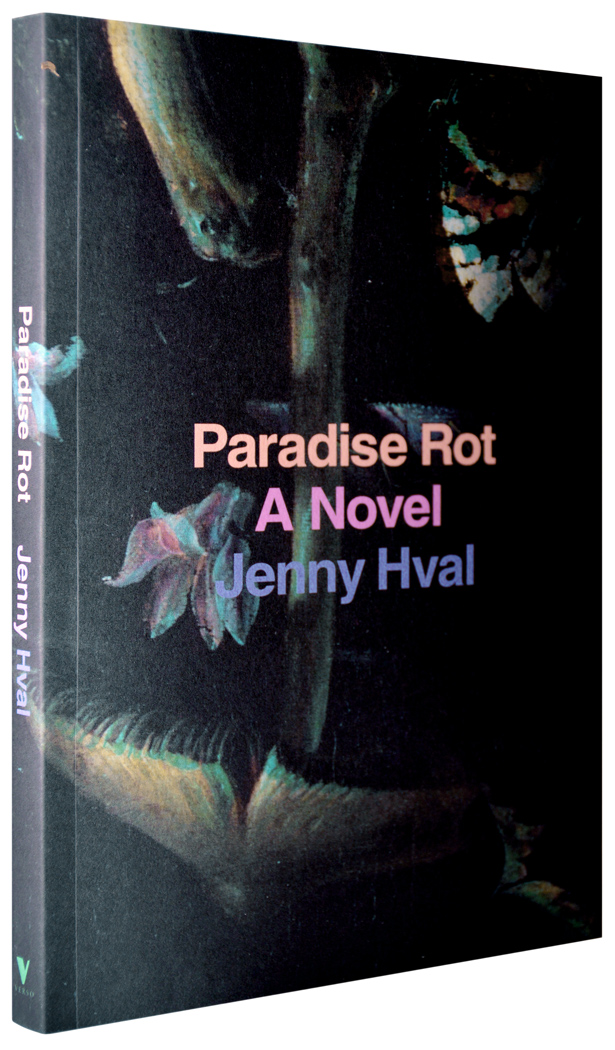 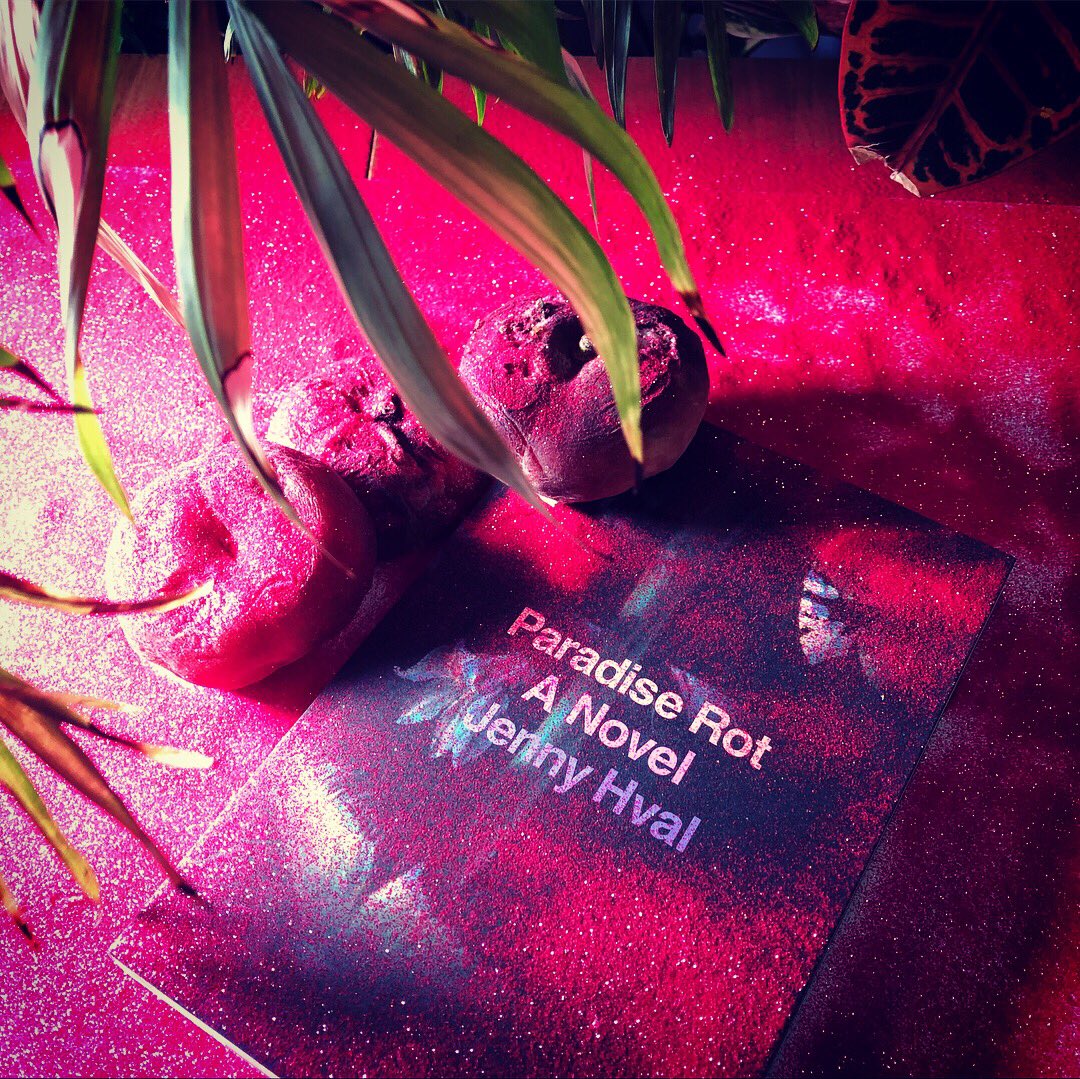 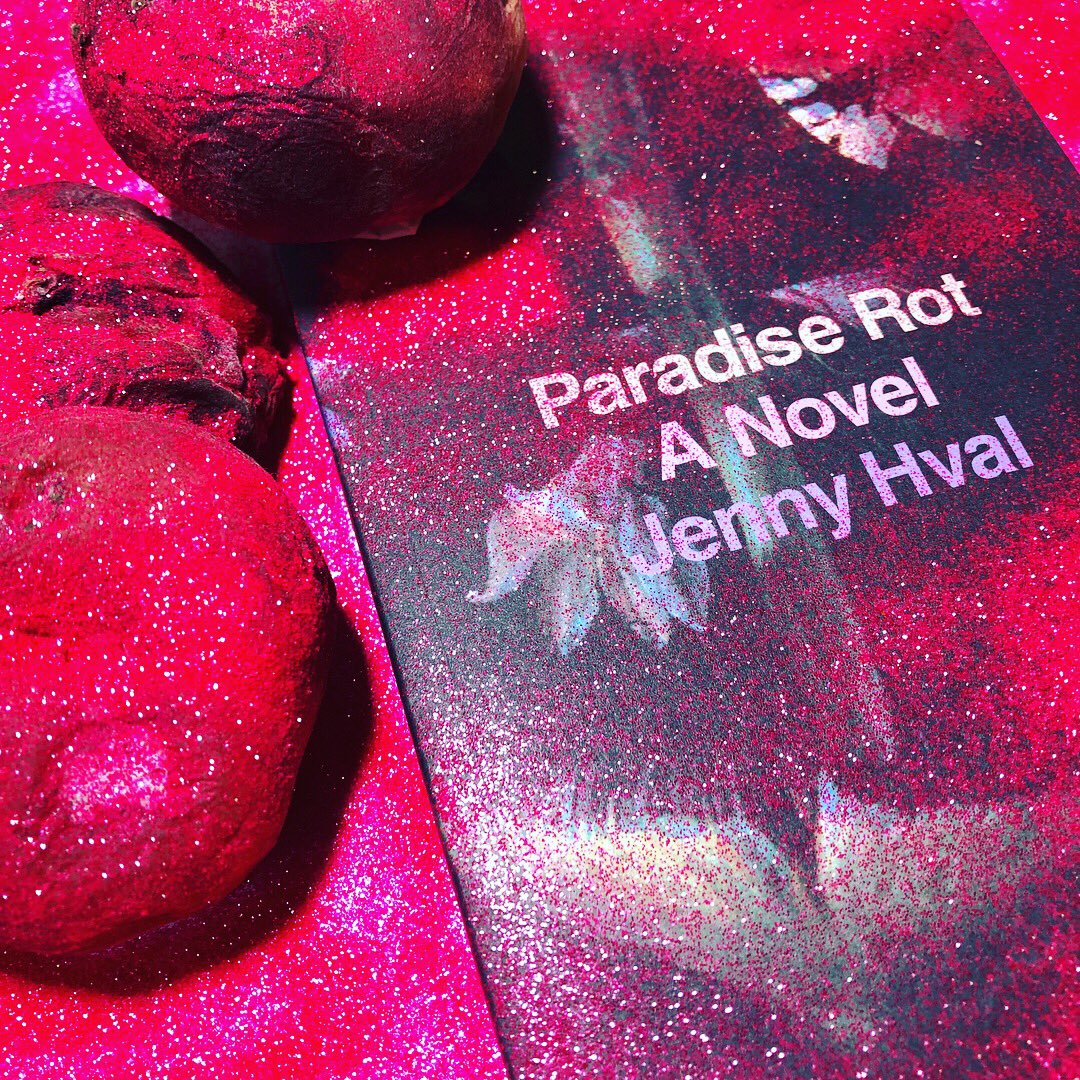 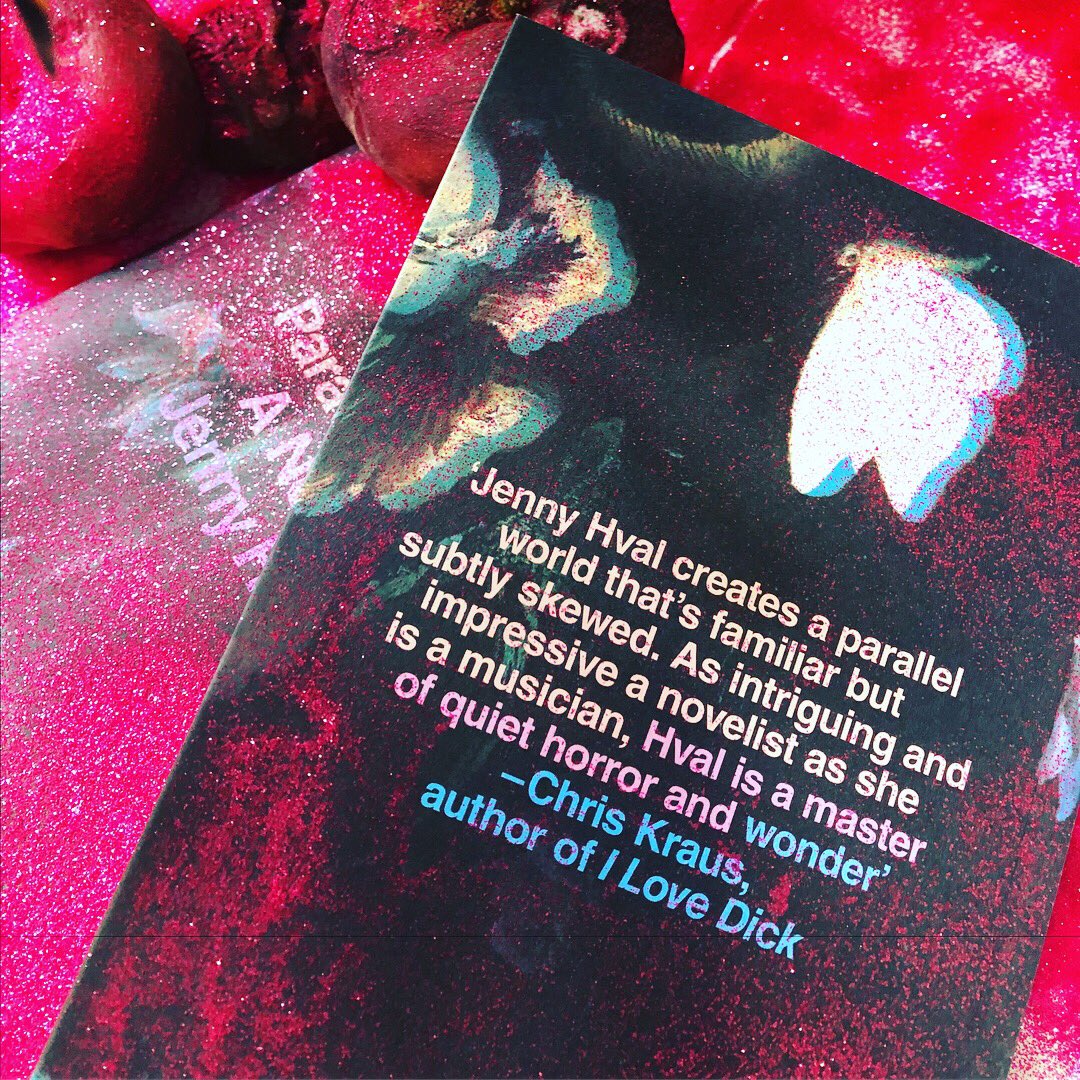 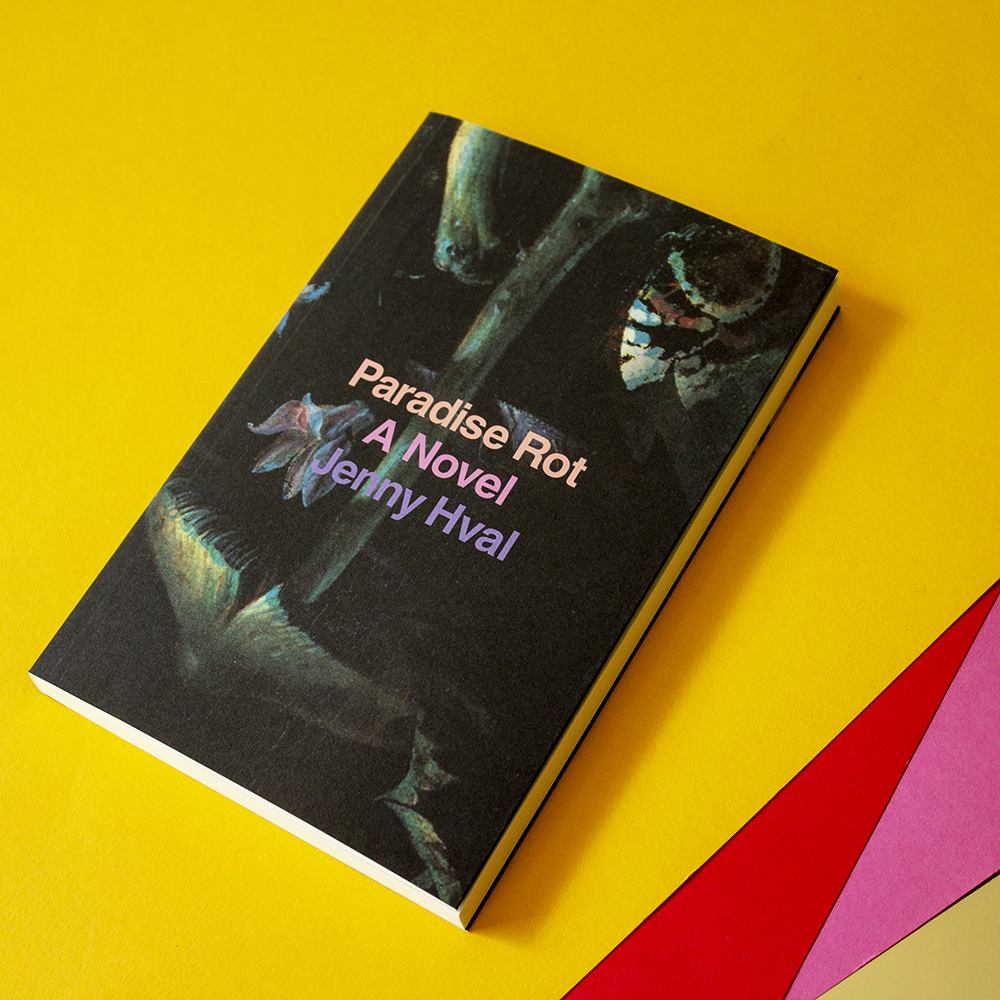 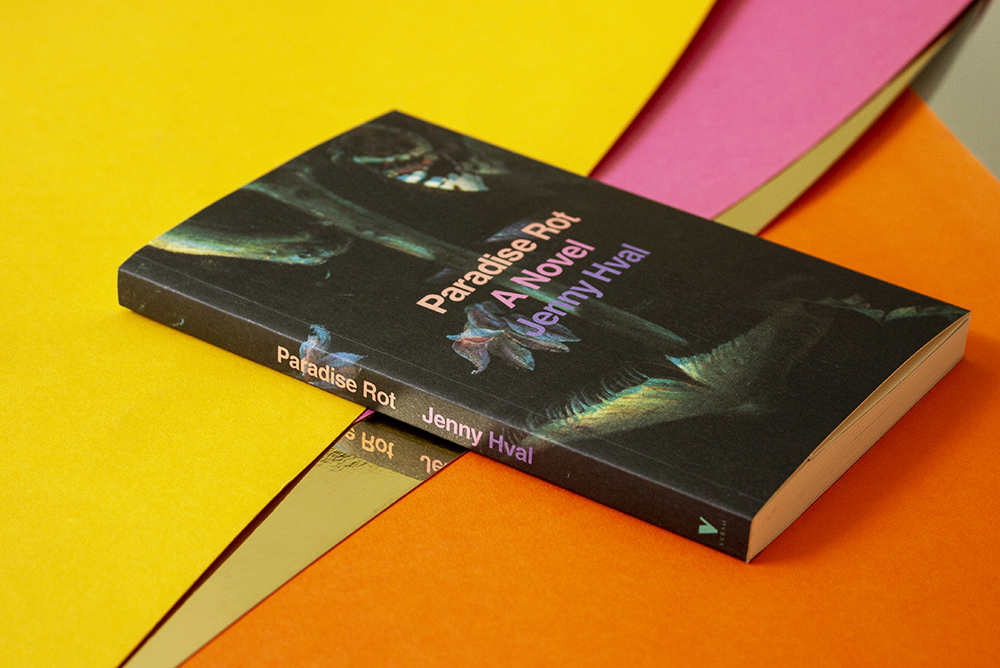 Jo is in a strange new country for university and having a more peculiar time than most. In a house with no walls, shared with a woman who has no boundaries, she finds her strange home coming to life in unimaginable ways. Jo’s sensitivity and all her senses become increasingly heightened and fraught, as the lines between bodies and plants, dreaming and wakefulness, blur and mesh.

“In Paradise Rot, Jenny Hval creates a parallel world that’s familiar but subtly skewed. As intriguing and impressive a novelist as she is a musician, Hval is a master of quiet horror and wonder.”

“Hval is an artist of many questions—the ones she asks, and those she provokes in the listener. Apocalypse, Girl swerves from decipherable politics to recondite personal imagery. It’s not a paraphrasable album, but it is a listenable one, its avant-garde tendencies held in check by Hval’s beguiling voice.”

“Contemporary pop culture teems with unfiltered first-person narratives and cathartic self-exposure, from search-engine-optimized ‘it happened to me’ essays to the highbrow family memoirs of authors like Maggie Nelson. At its worst, the form is trashy; at its best, it can convey ideas that extend far beyond the confessor, tapping into something both intensely intimate and universally political. The avant-garde Norwegian singer Jenny Hval pulls off this feat with a rare grace, layering prose poems, both spoken and sung, over synths, pulsing house rhythms, and noise-rock fuzz. Where Hval’s last studio album, Apocalypse, Girl, served as a withering feminist commentary on the sexual politics of American consumer culture (sample lines: “I beckon the cupcake/The huge capitalist clit”; “I grab my cunt with my hand that isn’t clean”), Blood Bitch, out September 30, deconstructs the menstrual cycle, the ageing body, and the symbiotic relationship between lovers, vampires, and prey.”

“Hval’s words shock precisely because they’re not referring to sex or desire but instead address vulnerability and nurturing … Hval’s world is radically different: an intimate, often mysterious place where the melodic sophistication of Björk and Kate Bush meets Laurie Anderson’s witty cool.”

“As with all her work, she finds new ways to provoke, and new parts of your brain to light up.”

“Norwegian artist Jenny Hval presents a version of female sexuality in which carnal impulses, anxieties and the female/male perspective are often knotted together.”

“Every page of Paradise Rot contains something in it that burrows deep inside you. Much like Hval’s musical output, the book is almost uncomfortably intimate, the kind of penetrating encounter that will make you uncontrollably shudder as your body is plunged into the sensory world that Hval has created. It’s an uncanny and yet deeply moving reading experience, one that Hval uses to explore the complexities of queer desire and human enmeshment in our physical surroundings.”

“Hval is an expert at creating and sustaining atmospherics across genres, and Paradise Rot is no exception. Paradise Rot is an odd microcosm inside an ordinary world … It is, in many ways, a novel about finding and then choosing a self; it also shows the pull of unexpected queer desire and the dismantling of boundaries that draw requires. But most of all, in the way that a microscope reveals an unsettling truth about the familiar (that it’s teeming with life you never expected), Paradise Rot is hard to forget.”

“Hval’s curiosity is more than simple pleasure in perversity: It’s meant to defile the idea of women’s bodies as pristine and plush … and reshape it into something more dreadfully real. Maybe more revolutionary than that transfiguration is her disemboweling of desire itself, unraveling it to its fearsome, primal state, and exploring the strangeness of how sexuality can alienate one from oneself; how feelings of mistrust come about when desire is new, queer and unreliable.”

“Strange and lyrical … Hval’s writing is surreal and rich with the grotesque banalities of human existence.”

“With the release of the newly translated Paradise Rot, we can experience her artistic evolution beyond the shape of a timeline, as a series of challenging examinations melting and bending in on themselves … Listening to—or now reading—her work feels like getting jettisoned into an underwater reality that fantastically mirrors our own. It would be entirely terrifying, if exploring it weren’t so much fun.”

“The themes of alienation, queerness, and the unsettling nature of desire align Hval with modern mainstays like Chris Kraus, Ottessa Moshfegh, and Maggie Nelson.”

“Hval’s surreal debut riffs on the same layered intricacies as her music, transcending simple categorisation to create a dreamy landscape both separate and a part of what we recognise as reality.”

“A lurid hothouse of a thriller about a female student’s sexual awakening.”

Our quickest reads: perfect for those short on time or attention span. All under £10/$10.