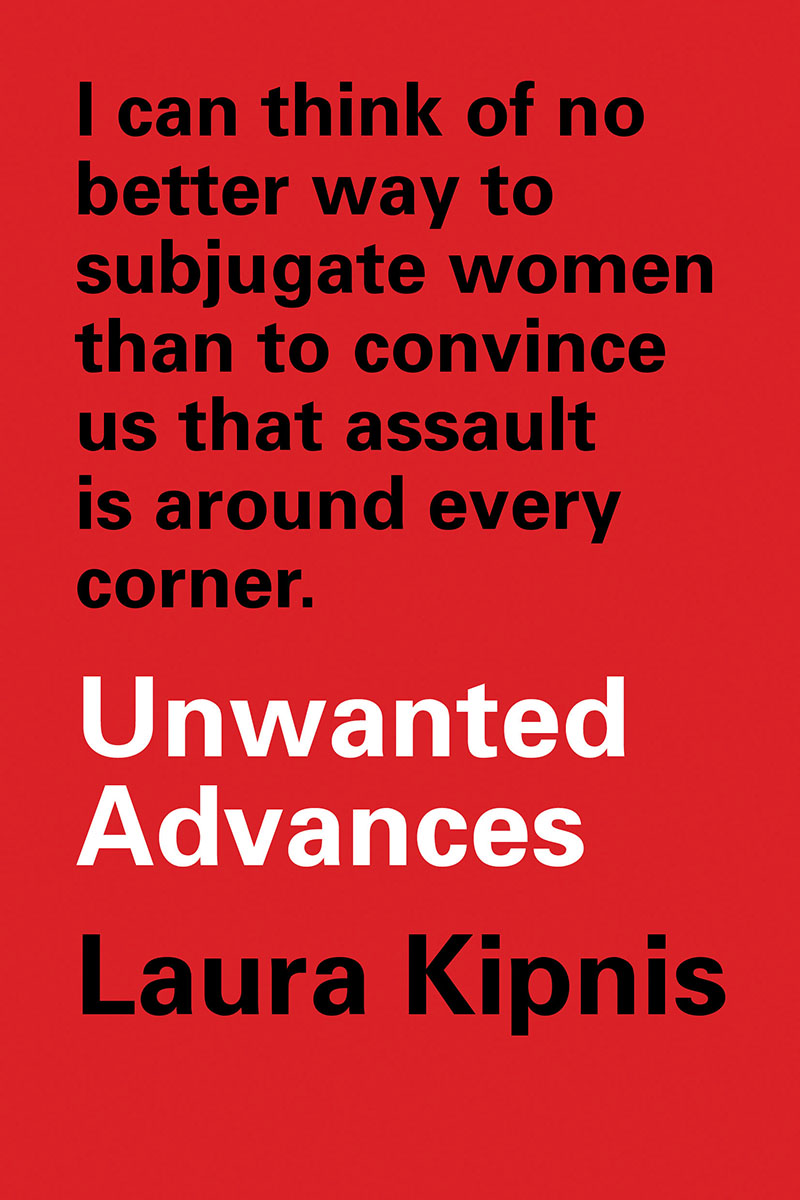 Feminism is broken: the current attempts to protect women from sexual abuse on campus and online have failed. Regulation is replacing education, and a woman’s hard-won right to be treated as a consenting adult is being repealed by well-meaning bureaucrats.

Unwanted Advances is an investigation that begins when contrarian feminist Laura Kipnis becomes the object of a protest march by student activists at her university after writing an essay about sexual paranoia on campus. The experience leads her to question women’s roles in national debates over free speech, “safe spaces,” and modern sexual mores. Kipnis argues for more honesty, presenting a timely critique of feminist paternalism and the covert sexual conservatism of hook-up culture.

“Above all else, though, Unwanted Advances is necessary. Argue with the author, by all means. But few people have taken on the excesses of university culture with the brio that Kipnis has. Her anger gives her argument the energy of a live cable.”

“A bracing book, its message delivered with fierce intelligence and mordant humor.”

“A persuasive and valuable contribution to the continuing debate over how to deal with sexual assault on college campuses.”

“This book is harrowing; this book is hilarious (like Dorothy Parker channeling Franz Kafka); but the main thing it is is BRAVE. On top of which, it is urgently necessary.”

– Lawrence Weschler, author of Waves Passing in the Night

“A revelation: a great work of investigative journalism and a thorough examination of a case that feels like it couldn’t happen in America … Kipnis makes you fear for a whole new set of reasons.”

– Hanna Rosin, author of The End of Men

“Chilling, shocking, meticulously reported, eminently readable, and in places perversely hilarious … most of all it is a crucial piece of a burgeoning conversation about threats to free speech and intellectual freedom on college campuses … Kipnis’s voice is as clarion as her insights are astute.”

– Meghan Daum, author of The Unspeakable

“Kipnis is everything the academic bureaucrats she writes about are not: brave, honest, judicious, mature, and self-aware, with a seasoned understanding of both sexual politics and campus politics. She has struck a mighty blow for sanity, equality, and academic freedom.”

“A brave, disturbing, yet scrupulously fair book: a brilliant and pragmatic manifesto for a kind of ‘adult’ feminism that rejects the campus cult of female victimhood.”

– Terry Castle, author of The Professor

“Clarity of expression and the uncompromising vehemence of her thoughts make Kipnis the best polemical investigator writing today, which both sells her short and raises an unexpected question: how come reading her, however uncomfortable or complex the subject, is always such a tremendous pleasure?”

“Laura Kipnis is a hero. She has written a book that will benefit many while bringing all kinds of grief upon her.”

“The author’s trenchant yet witty analysis reveals how the entrance of university administrators, each with his or her own agendas and vendettas, rendered a complex situation even murkier and more byzantine … As in all her books, Kipnis is consistently provocative and intelligent.”

“Courageous, thought-provoking … Without diminishing the gravity of sexual assault, Kipnis’s readable and judiciously reported work illustrates how the ‘sex-as-danger preoccupation on campuses now’ is infantilizing women rather than empowering them.”

“A bracing book, its message delivered with fierce intelligence and mordant humor.”

“Teaches us another important lesson about how to confront pressing issues without foreclosing engaging argumentation, constraining critical distance or letting the discourse devolve into moralizing.”

“It’s hard to imagine an objective reader finishing Unwanted Advances and not having her mind changed, if she has up to now accepted the mainstream version we’ve been reading in the news: that Title IX is a necessary tool to safeguard women who have been sexually assaulted … A clarion call for both men and women to recognize the reality of female autonomy that feminism has always argued for, and that today’s campus culture threatens to eclipse.”