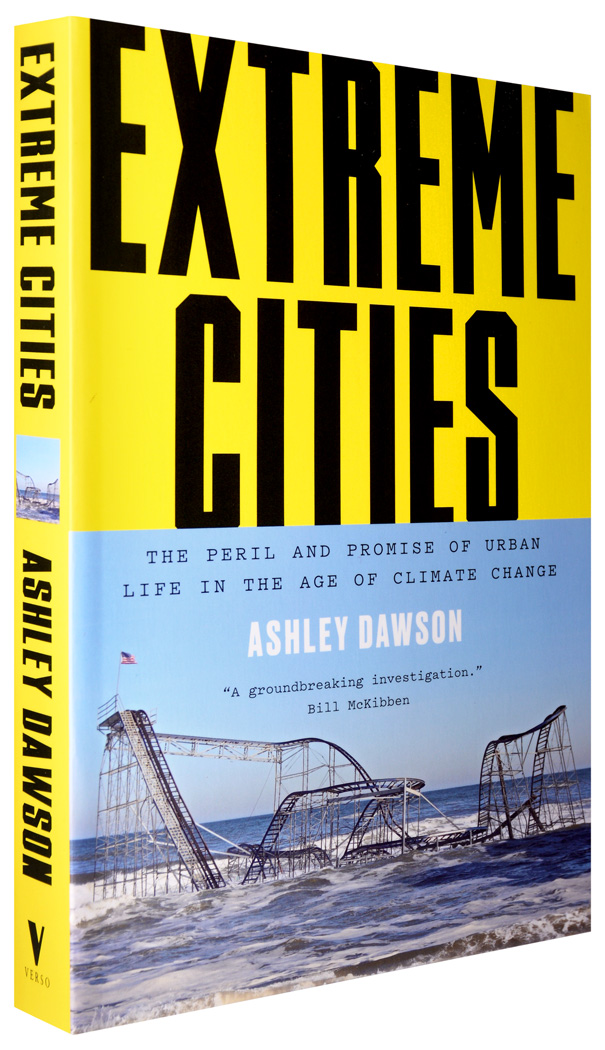 How will climate change affect our lives? Where will its impacts be most deeply felt? Are we doing enough to protect ourselves from the coming chaos? In Extreme Cities, Ashley Dawson argues that cities are ground zero for climate change, contributing the lion’s share of carbon to the atmosphere, while also lying on the frontlines of rising sea levels. Today, the majority of the world’s megacities are located in coastal zones, yet few of them are adequately prepared for the floods that will increasingly menace their shores. Instead, most continue to develop luxury waterfront condos for the elite and industrial facilities for corporations. These not only intensify carbon emissions, but also place coastal residents at greater risk when water levels rise.

As much a harrowing study as a call to arms Extreme Cities is a necessary read for anyone concerned with the threat of global warming, and of the cities of the world.

“Extreme Cities is a ground-breaking investigation of the vulnerability of our cities in an age of climate chaos. We feel safe and protected in the middle of our great urban areas, but as Sandy and Katrina made clear, and as this fine book reveals anew, the massive shifts on our earth increasingly lay bare the social inequalities that fracture our civilization.”

“A substantive contribution to the growing dialogue about our response—or lack thereof—to climate change.”

“The way we design and live in cities will determine humanity’s ability to avoid an anthropogenic mass extinction event in the coming century. Dawson makes this vividly clear in Extreme Cities, laying out in detail the nature of the problem and some possible positive actions we can take. Crucial to his argument is the fact that technological solutions will not be enough, so that we need to drastically reform the capitalist economic system to properly price and value the biosphere and human lives. His point that social justice is now a necessary survival strategy makes this not just a meticulous history and analysis of our situation, but also an exciting call to action.”

“Dawson makes a convincing case that, unless urban dwellers and civic leaders engage in a fundamental reconceptualization of the city and whom it serves, the future of urban life is dim.”

“Cities both in the North and the South are already suffering the effects of climate change. Government and business fitfully recognize and respond, but in ways that reinforce existing injustices and as often as not make things worse. Dawson shows how social movements have combined action on disaster relief with forms of equitable common life to produce models for radical adaptation from which we can all learn. This is a brillant summation of what we know and what we can do build a new kind of city in the ruins of the old.”

– McKenzie Wark, author of Molecular Red: Theory for the Anthropocene

“Many books have elucidated the ever-increasing dangers of climate change, particularly the disastrous impact that rising sea levels will have on coastal regions, but Dawson goes further as he outlines some potential solutions to this crisis. Massive technological projects may not be what’s needed, he finds; instead, the solution may already exist in radical movements to forge a more just and equitable society.”

“A powerful argument in a dire situation: that we revise our cities to the new game changer, or climate change will revise urban existences as we know it.”

“A sophisticated and provocative exploration of the unfolding impact of climate change on urban environments.”

“A revelatory confrontation between two forms of ‘surplus liquidity’: the rent-seeking excess of circulating global capital and the more literal liquidity of the rising tides of climate change. The setting is the city and this meticulously researched and argued book probes the nexus of myopia, greed, environmental disaster – and hope – that has placed the urban habitat of billions of us in extremis.”

– Michael Sorkin, author of All Over the Map: Writing on Buildings and Cities

“A must-read for everyone who wants to understand the politics of climate change in an increasingly urban planet, and to explore the possibilities for radical change beyond all technological fixes and governmental adjustments that only reproduce the system as it is.”

“An ultimate call to action.”

– Joep Janssen, author of Living with the Mekong: Climate Change and Urban Development in Ho Chi Minh City and the Mekong Delta

“A superb essay of political ecology, Extreme Cities demonstrates that there is nothing more depending on nature than the city, offering both a diagnosis and a possible therapy for one of the greatest challenges of our time.”

– Serenella Iovino, editor of Material Ecocriticism and Environmental Humanities: Voices from the Anthropocene

“Extreme Cities takes the critical long view to challenge city decision-makers to deal seriously with the clash of business-as-usual development, threats from climate change, and persistent social inequality to develop real transformations to drive cities toward sustainability and resilience.”

“With the majority of humanity located in cities, it behooves us to consider urban ecologies as recent and future sites of non-natural disasters as well as inspiring places of collective resilience and struggles for justice. Dawson’s book is a guiding light.”

– T.J. Demos, Professor of History of Art and Visual Culture at UC Santa Cruz, Director of its Center for Creative Ecologies

“The definitive study of an urban – and planetary – system pushed to the breaking point. Extreme Cities paints a terrifying, but also hopeful, picture, weaving together accounts of iron-fisted states, greedy real estate developers, and the communities that challenge their rule.”

– Jason W. Moore, author of Capitalism in the Web of Life

“A profoundly sobering picture of climate change’s uneven urban toll, both across global expanses and within particular neighborhoods, while also spotlighting instances of radical, on-the-ground resistance to such trends.”

“[Ashley Dawson] is well attuned to the ways that upheavals and disasters disproportionately affect the socioeconomically disadvantaged. As Donald Trump continues to roll back protection measures and disavow the U.S.’s role in global cooperation to mitigate the effects of climate change, this book is a clear-eyed reminder of who, and what, will be left most vulnerable as a result.”

“Dawson’s book destroys the comforting global discourse of climate change, resilience and adaptation and introduces the key words of our time: the dramatic ‘climate apartheid’ currently unfolding in front of us. A shrewd analysis of the prodigious contradiction of capitalism at the time of the anthropocene: what happens when coastal cities, the great capital sinks of capital, literally sink.”

– Jean-Baptiste Fressoz, coauthor of The Shock of the Anthropocene: The Earth, History and Us

“Books on climate change are a dime a dozen now, but few, if any, truly reckon with the potential scale of the disasters that await. Dawson reveals the inadequacies of current plans to deal with the problems that cities around the world will face. Forget such buzzwords as 'green cities,' 'resilience,' and 'sustainable development' — the age of 'disaster communism' is here.”

“Extreme Cities is a sobering account of how planetary urbanization has put us on a collision course with the natural world.”

“Extreme Cities is an angry book—as it should be … Ashley Dawson outlines the existential dilemma facing coastal cities, and the refusal of various powerbrokers to acknowledge that reality, in bold and frequently horrifying terms.”

“Invoking terms such as ‘climate apartheid,’ he greatly expands what people traditionally think of as relevant climate policy language. Recognizing that climate change mitigation and adaptation are interwoven with—and exacerbated by—social inequities and other problems plaguing modern cities is sobering, but this realization provides hope that humanity can move toward greater resilience to environmental problems by addressing non-climatic factors that will improve cities in the presence or absence of climate change.”

“Extreme Cities takes on the needed work of slowing down to chronicle and consider this meantime, without shying away from its messiness…More than simply lay out the existence of disparities, it illuminates the relationship between them.”

“[Ashley Dawson] cuts through the green capitalist hype and shows instead that life under climate change has grown increasingly precarious for working-class people living in major urban centers in the twenty-first century … A sweeping narrative that ties together disparate calamities.”

New York City is steadily sinking into the sea. . .Is there not a plan for that?