The past and future of black American history

In our information–overloaded twenty-first century, it seems impossible to fully discern or explain how we know about the past. But two things are certain. Whether we are conscious of it or not, we all think historically on a routine basis. And our perceptions of history, including African American history, have not necessarily been shaped by professional historians. In this wide-reaching and timely book, Pero Gaglo Dagbovie argues that public knowledge and understanding of black history, including its historical icons, has been shaped by institutions and individuals outside academic ivory towers. Drawing on a range of compelling examples, Dagbovie explores how, in the twenty-first century, African American history is regarded, depicted, and juggled by diverse and contesting interpreters—from museum curators to filmmakers, entertainers, politicians, journalists, and bloggers. Underscoring the ubiquitous nature of African American history in contemporary American thought and culture, each chapter unpacks how black history has been represented and remembered primarily during the “Age of Obama,” the so-called era of “post-racial” American society. Reclaiming the Black Past is Dagbovie’s contribution to expanding how we understand African American history during the new millennium.

“During the Age of Obama, African American history has been processed, packaged, and delivered to the unsuspecting public by amateurs instead of professional historians. Pero Dagbovie exposes these amateurs and their historical inaccuracies in the painstaking style of the professional historian at his very best. Profoundly researched and crisply written, Americans need Reclaiming the Black Past to recognize their history.”

“As I write, President Trump has pardoned boxer Jack Johnson, who was unjustly convicted in 1913 for transporting a white woman across state lines, while slighting black NFL players by arguing they are un-American for protesting racial injustice during games. Pero Dagbovie’s brilliant new book couldn’t be more timely in explaining how black history has been used, and misused, and often manipulated, by presidents, including Trump and Barack Obama—and by other politicians, comedians, Hollywood, and Black History Month advocates and celebrations. Probing the paradox of how black culture, and its colorful history, is at once at the heart of American society while severely under appreciated as a source of its moral vitality and intellectual vibrancy, Reclaiming the Black Past is a thrilling and creative exploration of how and why black history is made and interpreted far beyond the historical guild in the Age of Obama.”

“Black history matters. Pero Dagbovie’s provocative take on the meaning of the African American past in public discourse reveals how it matters in political affairs, in popular culture, in the market place, in law, and in our national monuments. If you think Black history is invisible in this country, read this book and think again. Our history is everywhere, distorted, redeemed, contested, and hidden in plain sight. Slavery, Jim Crow, Civil Rights, Black Power, Rebellion, Reparations—them’s fightin’ words. And the fight over our past continues to shape our future.”

“In Reclaiming the Black Past, Pero Gaglo Dagbovie posits that approaches to African American history generated outside the academy have mattered as much, if not more than, the work of trained scholars. In straightforward and accessible prose, he argues that figures as diverse as comedians, filmmakers, youth activists, museum curators, and public officials are the key interpreters of the black historical record for popular audiences. In appealing to his colleagues in the field to return to the public through the practices of “living history,” Dagbovie deftly manages a balance between cultural politics and intellectual thought. In the process, he has delivered an important work about the epic transformations of the last decade.”

“Pero Dagbovie’s Reclaiming the Black Past is an incisive exploration of the way Americans outside of the ivory tower have used and misused black history in the past quarter century. Ranging widely from the treatment of slavery in movies to President Obama’s handling of Black History Month, Dagbovie makes a strong case that historians must join public discussions about the black past that have heretofore been dominated by politicians, bloggers, movie producers, and comedians. Practicing what he preaches, Dagbovie brings a rigorous historical analysis to recent public debates about black history, in the process illuminating several much discussed but understudied subjects and enriching our knowledge of the 1990s and 2000s. As we leave the lush racial terrain of the Obama era and enter the barren scrubland of the Trump years, this book is an important resource for the journey ahead.”

“Historian Pero Dagbovie has written a much-needed study of the ways in which African American history is explored, understood, and told in the US. Reclaiming the Black Past offers an incredibly sophisticated, yet accessible, book on how everything from public museums, films, novels, and even comedians have shaped our collective perspectives on so much of African American history. This book functions as a remarkable and nuanced examination of popular perceptions of black history with a perfect balance of insider perspective and a sensitivity to how laypeople approach the subject.”

“With outstanding precision, Pero Dagbovie sorts through the muddled musings of the many people who profess to know black history and deconstructs the mixed messages emanating from the major cultural institutions claiming to chronicle the black past to reveal the ways black history has been (mis)represented, (mis)interpreted, and (mis)remembered. This is African American intellectual and contemporary history at its very best.” 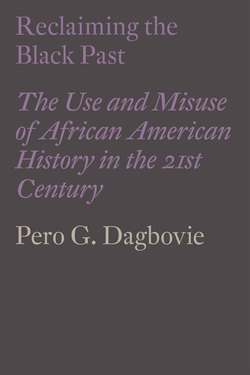 Reclaiming the Black Past