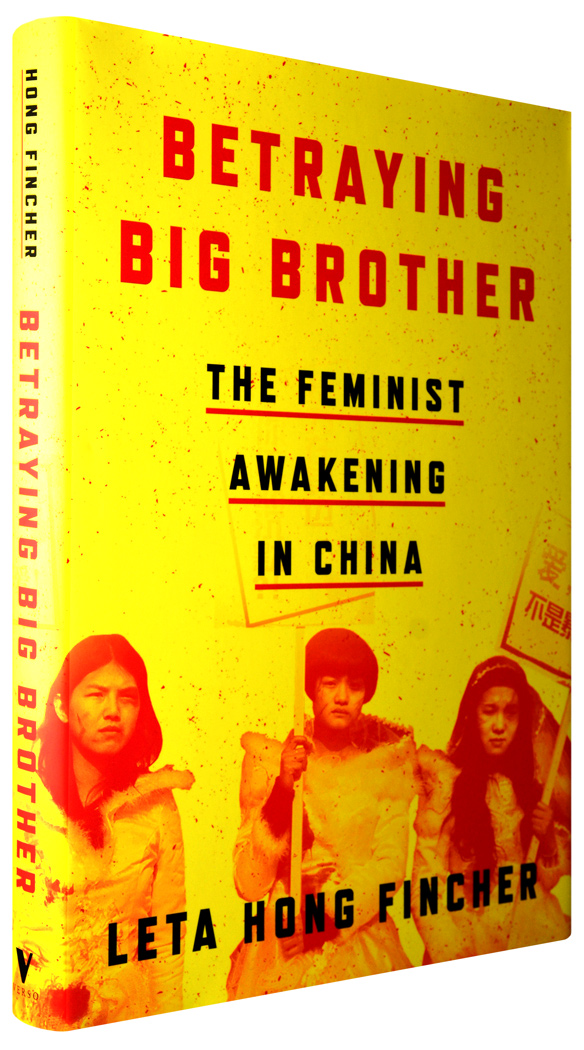 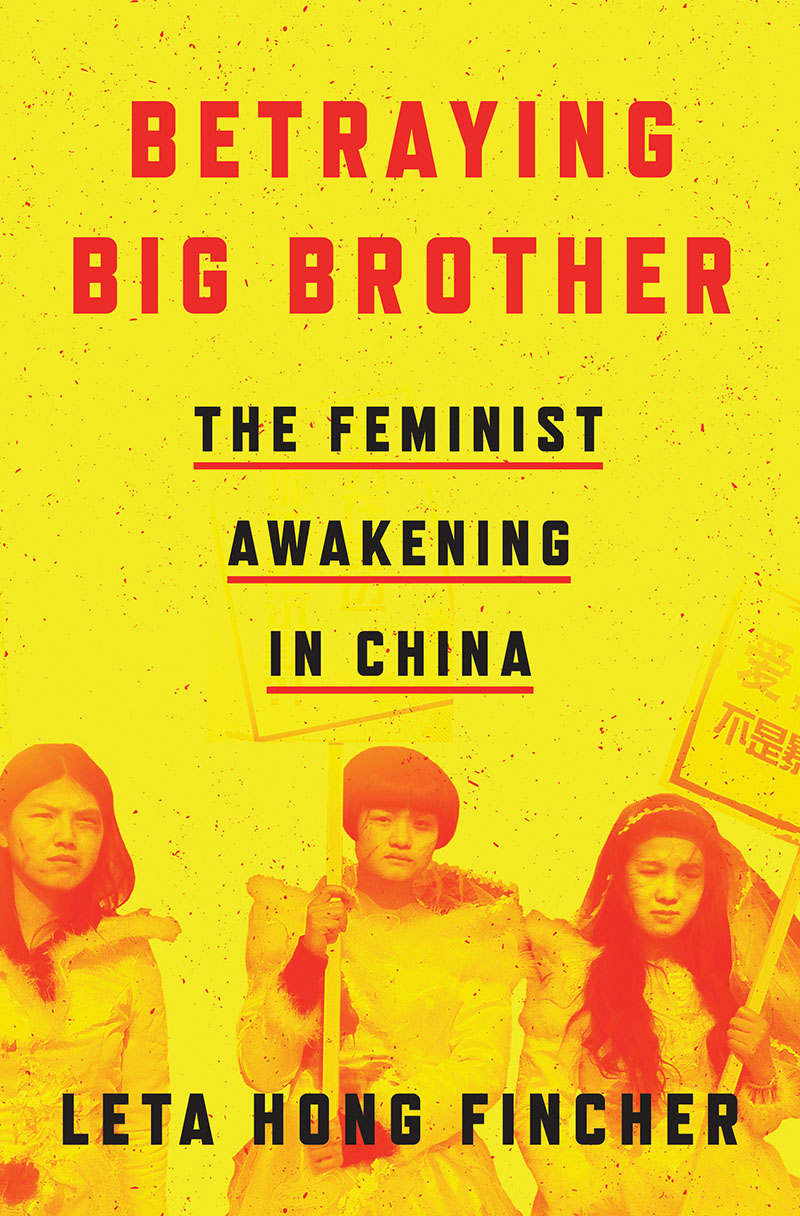 Available for pre-order. This item will be available on April 27, 2021.

On the eve of International Women’s Day in 2015, the Chinese government arrested five feminist activists and jailed them for thirty-seven days. The Feminist Five became a global cause célèbre, with Hillary Clinton speaking out on their behalf and activists inundating social media with #FreetheFive messages. But the Five are only symbols of a much larger feminist movement of civil rights lawyers, labor activists, performance artists, and online warriors prompting an unprecedented awakening among China’s educated, urban women. In Betraying Big Brother, journalist and scholar Leta Hong Fincher argues that the popular, broad-based movement poses the greatest challenge to China’s authoritarian regime today.

“A vital and necessary book in a world hostile to women and girls. Leta Hong Fincher’s account of a powerful network of activists is a foundational text on feminism in contemporary China, rich with scholarship and a grasp of history. It is a book to inspire and to guide all of us who insist on fighting the patriarchy globally.”

– Mona Eltahawy, author of Headscarves and Hymens: Why the Middle East Needs a Sexual Revolution

“A provocative, sharp-edged account of Beijing’s push to cajole women to marry and fix the country’s sagging birth rates. A must-read for students of feminism.”

– Mei Fong, author of One Child: The Story of China’s Most Radical Experiment

“Writing with rigor, passion, and indignation, Hong Fincher introduces a group of Chinese feminist activists who refuse to be intimidated by China’s powerful patriarchal state. Offering a detailed account of the women’s critiques of increasing gender inequality in China, Betraying Big Brother is a singular account of a Chinese—and now global—movement that will not be silenced”

– Rebecca E. Karl, author of Mao Zedong and China in the Twentieth Century

“Fincher focuses on the history of a small group of female activists known as the Feminist Five , who have been hounded by the authorities for innocuous acts such as trying to hand out stickers on International Women’s Day. She argues persuasively that the activism the five awakened is already challenging the authoritarian state, with more and more women taking control of their bodies and rejecting ‘China’s patriarchal institutions of compulsory marriage and child-rearing.”

“In Betraying Big Brother, Leta Hong Fincher unlocks a fundamental truth: the subjugation of women is a key feature of authoritarian power. But in telling the harrowing story of the detention of China’s Feminist Five, she may also have discovered the strongman’s Achilles’ Heel: a broad-based feminist movement poses an existential threat to a patriarchal state.”

– Rebecca MacKinnon, author of Consent of the Networked: The Worldwide Struggle for Internet Freedom

“In her vivid and comprehensive work on China’s emerging feminist movement, Leta Hong Fincher explores the coming of age of a generation of young activists in an authoritarian state increasingly hostile to social protest. A must-read for all seeking to understand China’s feminist activists, hear their voices, and experience the day-to-day reality of their lives.”

– Carl Minzner, author of End of an Era: How China’s Authoritarian Revival Is Undermining Its Rise

“In Hong Fincher’s estimation, the official hostility toward feminists in China as part of a global rise of authoritarianism and backsliding of democracy will affect not only China’s women but its economic future and will have worldwide repercussions. This is a fascinating and earnest book.”

“In clear, concise chapters, Fincher, whose previous books include Leftover Women: The Resurgence of Gender Inequality in China, lays out the origins of the movement and its exponential growth, as well as the Chinese government’s violent attempts to extinguish it. The US president may be walloping China via trade war, but Leta Hong Fincher argues that the most existential threat to Xi Jinping’s regime comes from within.”

“Betraying Big Brother shows how the [feminist] movement has risen on social media and taken root abroad and in cities like Guangzhou. Hong Fincher argues that the Chinese Communist Party relies on patriarchal crackdowns for its post-Soviet survival—and, further, that ‘anyone concerned about rising authoritarianism globally needs to pay attention to what is happening in China.’”

“Hong Fincher explains that far from a small movement on the fringes of Chinese society, feminism is on the rise, from the burgeoning and ongoing #MeToo movement, to increasing calls for protections for survivors of domestic violence … to protests against workplace discrimination.”

“Featured in The Washington Post and Times Higher Education”

“Brings the clash between China’s grassroots women’s movement and the state’s manipulation of women to life. Hong Fincher explores the struggles of young feminist activists who are detained and vilified for seemingly innocuous campaigns—handing out stickers warning against sexual harassment on public transport, or parading through the streets in soiled wedding dresses to protest domestic violence … A pertinent primer for anyone who wants to understand the aftermath of China’s one-child policy, and the country’s fledgling feminist movement.”

“In her sprawling and detailed recent book, Betraying Big Brother, Fincher aims to tell the story of the women’s rights movement in China through their saga. Fincher bases her narrative on interviews with [the Feminist Five] and their allies, while supporting their stories with deep research into the roots of the government’s crackdown on feminism.”

“Through interviews with China’s famous Feminist Five, arrested in 2015 on orders of the Chinese government, and other leading Chinese activists Hong Fincher draws a portrait of the modern Chinese feminist movement and its pushback against interpersonal, governmental and digital control over their lives.”

“[Fincher] argues that misogyny is at the core of China's authoritarian regime and that a feminist movement, if not suppressed, could prove to be the country's 'most transformative movement.'”

“Leta is one of the leading voices on feminism in China. This book puts into perspective the role of women in China - and what the future holds for them.”

“Hong Fincher makes a provocative and persuasive argument about the significance of the feminist movement in China, asserting that it is already a political wave the likes of which China has not seen since 1989. The potential mobilizing power of contemporary feminist activism speaks directly to Chinese leaders' not-entirely-illogical paranoia about well-networked social movements.”

“Leta Hong Fincher's Betraying Big Brother captures the irony of having an international day dedicated to women's rights when governments across the world work at stifling those rights. Fincher interviews the five arrested Chinese women after their 37-day-long detainment, and discovers how a surveillance state tried to stamp out feminism, even though the women forged their politics through personal experiences with domestic, sexual, and, later, police violence.”

“A deeply affecting book.... Hong Fincher’s vivid, blow-by-blow account of the women’s experiences is a valuable work of journalism, and she offers interesting evidence of a wider feminist awakening.”

“A necessary read to understand the role of women in Chinese society and why the feminist movement may be one of the few social movements to overcome the Chinese government’s persecution.”