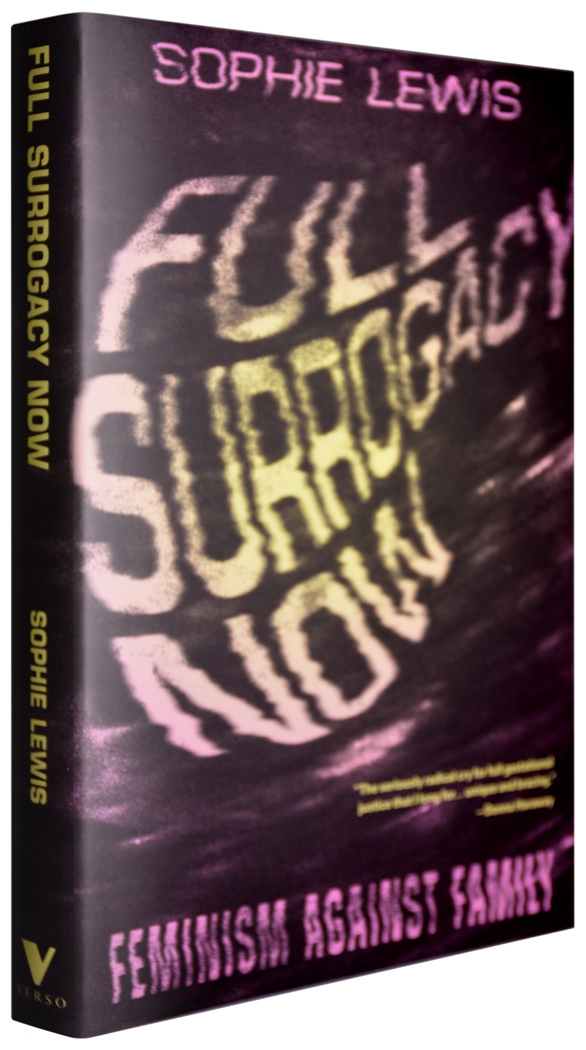 Where pregnancy is concerned, let every pregnancy be for everyone. Let us overthrow, in short, the “family”

“Rooted in historical, site-based, narrative, and political accounts, Full Surrogacy Now is the seriously radical cry for full gestational justice that I long for. This kind of gestation depends on realizing the implications of knowing that we all actually, materially, make one another, and that this labor continues to be exploited, extracted, and alienated—unequally—at every turn in Capitalism and Patriarchy. Full of brilliant, generative, and also shamelessly biting critique of both bourgeois and communist tracts, feminist and otherwise, Lewis’s voice is unique and bracing. I need it; it fills my whole self with reimagined possibilities for making oddkin who are not property. Lewis set out to write an immoderate, utopian, partisan, anti-authoritarian communist defense of surrogates and surrogacy in ramifying registers of meanings and practices, and she has succeeded. Lewis asks the necessary questions, ‘Can we parent politically, hopefully, nonreproductively—in a comradely way?’ Can we become full surrogates for and with each other? In a book full of fierce demystifications and sharp dissections of injustice masquerading as humanitarianism, nonetheless Lewis convincingly and radically affirms: ‘Everywhere about me, I can see beautiful militants hell-bent on regeneration, not self-replication.’”

“Full Surrogacy Now is more than an intervention, it is a landmark text of visionary feminist thinking. Sophie Lewis tears down decades of essentialist and contradictory presumptions on labor, motherhood and ownership to offer us the possibility of new ways to live with and for each other. This book is as breathtaking as it is necessary.”

“An extraordinary book, as nuanced as it is provocative. Lewis delivers an incisive analysis, combining sensitivity to the material conditions faced by gestational laborers with a radical utopian vision for what surrogacy might become. It’s an exhilarating read and is likely to have a substantial influence on the field. I cannot recommend it highly enough.”

“Giving birth is commonly called labor. What happens if all of human pregancy and gestation is thought from the labor point of view? That’s the challenge of Full Surrogacy Now. If it is all labor, then how can that labor be freed from now global regimes of colonial and commodity exploitation? Lewis takes one of the most everyday things about being human and thinks it through from the point of view of a cyborg communism. This book goes far into places where few gender abolitionists have ventured and brings us a vision of another life.”

“Sophie Lewis and her expansive vision of feminism are desperately needed right now. She makes the work of undoing what ‘womanhood’ has come to mean look possible and irresistible.”

– Melissa Gira Grant, author of Playing the Whore: The Work of Sex Work

“Sophie Lewis is at the top of a new generation of scholars and activists thinking the transformation of gestational labor within contemporary pharmacopornographic capitalism. Neither simply natural nor banally cultural, gestation appears as the unthought core of gender and sexual politics, and the key of a forthcoming womb revolution: trans-Marx meets mammal’s politics!”

“An instructive and moving book about the work of babymaking and the best possible future for birthing and raising children. It offers both a convincing polemic about surrogacy’s past and present, and a vision of how to make it both more common and more mutually beneficial. Lewis treats surrogacy as a signal example of what will be integral to any common human flourishing to come: unmaking gender and the family as we know them, to build new kinds of sociality and care for what is not ‘biologically’ ‘ours.’ I was floored by it.”

– Sarah Brouillette, author of Literature and the Creative Economy

“Full Surrogacy Now arrived and I could not stop reading. The crises of our time are crises of reproduction. Radical that she is, Sophie Lewis gets right to the root of the matter—and, radical that she is, finds its roots to be intersecting and entangled, ‘lovely, replicative, baroque,’ as one of her own gestators, Donna Haraway, might put it. But the gestator? Lewis moves expertly through decades of debates, as well as a rapidly growing body of empirical research, on surrogacy to carry us beyond the by-now familiar refrain that this or that activity ‘is work.’ Her goal could hardly be more ambitious: to rethink the "natural" gestation that every one of us comes from. I will reread this book for the sense it gives me that new ways of making one another and the world new might, in fact, be possible. Its verve and wit make me feel sure that Lewis’ reproductive commune will be fun.”

– Moira Weigel, author of Labor of Love: The Invention of Dating

“Pregnancy. Babies. Families. Nature itself. Like capitalism, communism knows no bounds. Relentless in the task of seizing of the means of reproduction, Sophie Lewis is the Right’s worst nightmare.”

“Full Surrogacy Now makes a significant contribution to the pressing political project of advocating for the rights of those workers whose labour is so often delegitimised, exploited and criminalised … join[ing] such texts as Juno Mac and Molly Smith’s Revolting Prostitutes in combating the white, liberal, trans-exclusionary, whorephobic, ‘feminist’ discourse which is currently dominating conversations around sex work and gestational labour.”

“Lewis is attempting to do for pregnancy what the Wages for Housework movement did in reconceptualizing the unpaid labor done by women in the home as work. And recognizing surrogacy as work and surrogates as workers is a necessary first step, for if surrogacy is work, then isn’t, by extension, every pregnancy?”

“A thrilling new intervention ... by placing reproductive labour at the centre of her vision in Full Surrogacy Now, Lewis confronts a central issue that continues to be sidelined in the male-dominated field of futurism.”

“Theoretical, devious, a mix of manifesto and memoir.”

Taking feminism back to its radical political roots.

International Women's Day: Why We Strike