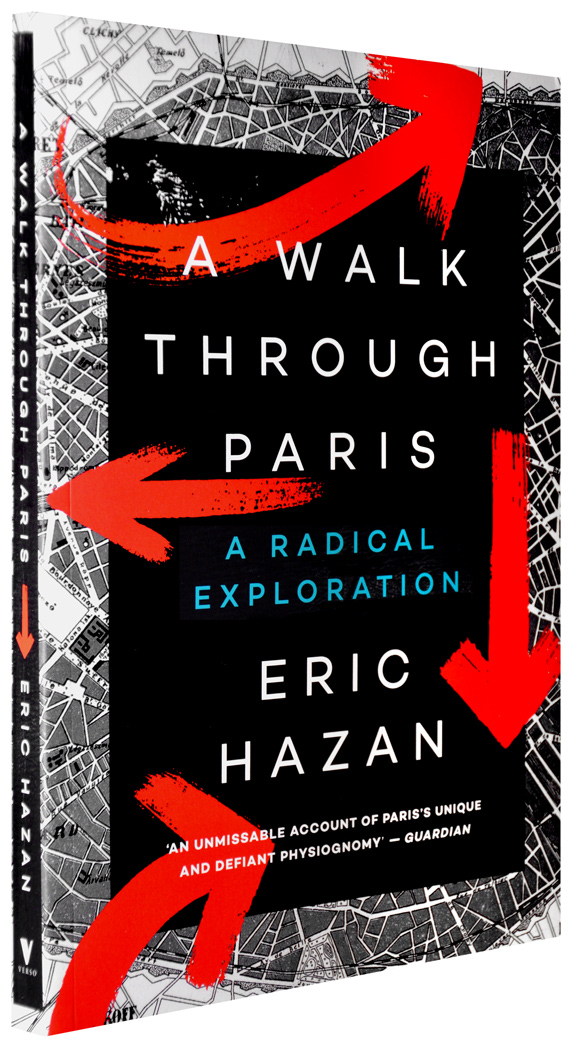 A walker’s guide to Paris taking us through its past, present and possible futures

Eric Hazan, author of the acclaimed Invention of Paris, takes the reader on a walk from Ivry to Saint-Denis, roughly following the meridian that divides Paris into east and west, and passing such familiar landmarks as the Luxembourg Gardens, the Pompidou Centre, the Gare du Nord and Montmartre, as well as forgotten alleyways and arcades. Weaving historical anecdotes, geographical observations, and literary references, Hazan’s walk guides us through an unknown Paris. With the aid of maps, he delineates the most fascinating and forgotten parts of the city’s past and present.

Planning and modernization have accelerated the erasure of its revolutionary history, yet through walking and observation, Hazan shows how we regain our knowledge of the city of Robespierre, the Commune, Sartre, and the May ’68 uprising.

Drawing on his own life story, as surgeon, publisher and social critic, Hazan vividly illustrates the interplay and concord between a city and the personality it forms.

“Eric Hazan’s elegant, characteristically learned account of his journey through contemporary Paris, written in a tone both intimate and authoritative, is at once a companionably unhurried evocation of the city’s rich, radical past and—at a time when capital is dramatically reorganising its topography—a bracingly urgent intervention in debates about the city’s future. As André Breton might have observed, there really are no lost steps here.”

“An ardent student of the anatomy of the city, Hazan is a keen observer with a remarkable memory: despite his limitations, he has written an unmissable account of Paris’s unique and defiant physiognomy.”

“In tracing a continuity of resistance and its presence within the contradictions of the contemporary city, Hazan makes a compelling argument that ‘the people have not lost the battle of Paris’ … This book similarly brings the solitary act of reading and the social experience of urban life into constant dialogue. Passages from Balzac, Baudelaire and André Breton come to mind at different street corners, verbal illuminations reflecting the ambience of a particular locale. In these enlightened pages, Hazan deftly guides the reader through a Paris where history and literature animate the lived experience of the present.”

“Hazan is much concernced with riot, insurrection, protest, and revolution. He is, naturally, on the side of the proletariat … A Walk Through Paris is sometimes a work of urbanism, sometimes a subversive history book, sometimes a kind of tourist guide.”

Don't get tide down in apathy. Dive into our alternative beach reading and spend the summer dreaming about life after capitalism!