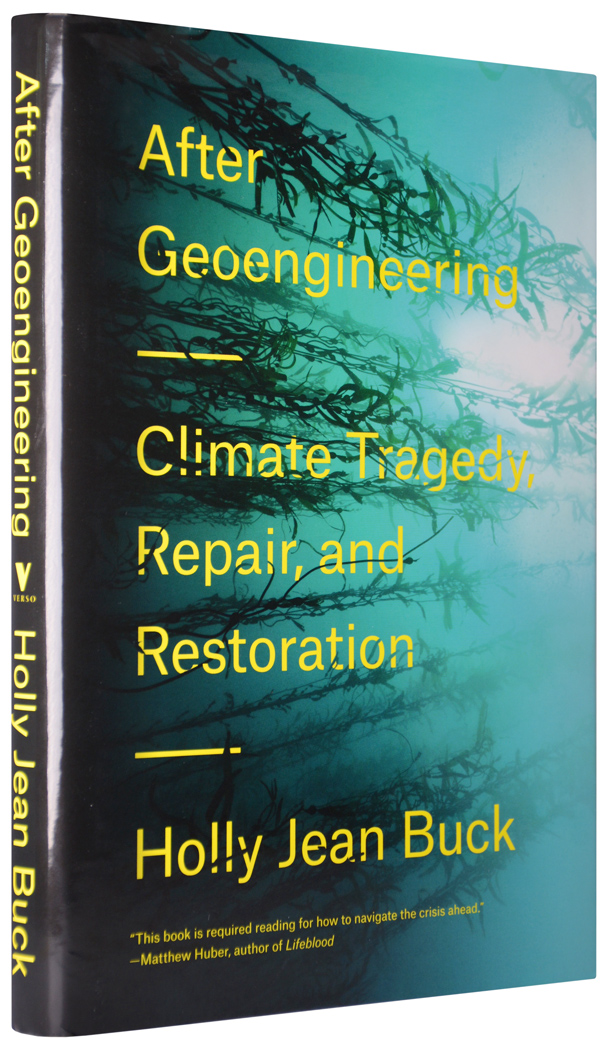 The window for action on climate change is closing rapidly. We are hurtling ever faster towards climate catastrophe—the destruction of a habitable world for many species, perhaps the near-extinction of our own. As anxieties about global temperatures soar, demands for urgent action grow louder. What can be done? Can this process be reversed? Once temperatures rise, is there any going back? Some are thinking about releasing aerosols into the stratosphere in order to reflect sunlight back into space and cool the earth. And this may be necessary, if it actually works. But it would only be the beginning; it’s what comes after that counts.

“A limpid synthesis of elegy and urgency. Unflinching about what looms for the world, Holly Buck outlines radical, transformative demands and agendas for a least-bad way forward, in the service of better ways thereafter.”

– China Miéville, author of October: the Story of the Russian Revolution

“This is the guide to the future. There’s hardly anything scarier than geoengineering, but it is coming towards us, closer for every day of CO2 spewed into the air. It can no longer be wished away—and thankfully, we have Holly Jean Buck to explain what it might look like and how it could be survived, perhaps even used for the good of the planet. Written in graceful prose, combining the latest science with the crystal ball of a sci-fi author, this book shines. Anyone worried about what comes next should read it.”

– Andreas Malm, author of The Progress of This Storm and Fossil Capital

“In the face of rapid climate change, how should we think about geoengineering? In this timely and bold book, Holly Jean Buck lays out a case for approaching geoengineering from the Left. Blending journalistic insight with scientific speculation, After Geoenginneering inspires much-needed thought experiments about the changes coming to our warmer and weirder world.”

“Climate is now an unmitigated disaster. Progressive activists are going to need to get up to speed on the emerging geoengineering industrial complex. Holly Jean Buck walks us briskly through what we need to know to engage with this deepening planetary crisis.”

“A really fantastic book; as if Ursula K. Le Guin wrote a definitive study of carbon management options for the twenty-first century. A meticulously researched, beautifully drawn portrait of dozens of possible futures and how to make them reality. A must-read for anyone who cares about making a cooler and more just future for generations to come.”

“The topic of geoengineering usually merits a quick dismissal among environmentalists, but Holly Buck’s After Geoengineering shows it is extremely complex with multiple available options. As emissions continue to rise and warming continues, this topic needs serious attention on the left since revolutionizing our energy system is likely not enough given what we’ve already emitted. Buck’s brilliant—and hopeful—overview is not merely technical or economic, but addresses head-on the implications for climate justice. Beautifully written, including creative ‘sketches’ imagining future scenarios, this book is required reading for how to navigate the crisis ahead.”

– Matt Huber, author of Lifeblood: Oil, Freedom and the Forces of Capital

“With After Geoengineering, Holly Jean Buck offers a sobering, prescient vision of a climate realism that we should heed. She decisively alters how the left might understand what anthropogenic intervention may require, both technologically and ethically. There are no easy solutions on offer, only difficult paths to cross while they are still open.”

“Geoengineering is the ‘third rail’ of left green politics that no one dares to touch. Holly Jean Buck transcends stale debates and allows us to imagine a hopeful world beyond both capitalism and climate catastrophe. Providing a rigorous (and joyful!) look at technological options to buy time, adapt to change, and renew the planet, this radical book is long overdue.”

“Buck has an atypical resume...One can discern the imprint of all [her] experiences in the book, especially in the way it intersperses slivers of science fiction set in exotic locales between technical chapters on the latest developments in geoengineering. The purpose of these sections is to allow the reader to imagine what a geoengineered future might look like...After Geoengineering is meant to present a more hard-nosed account than what one usually finds in the Green New Deal corpus.”

“A book to be read on its own terms...Buck’s eloquent and useful text seeks to disentangle a varied and complex cluster of technologies from the intimidating labels of ‘climate intervention’ or ‘geoengineering’.”

“Buck expertly the nuance and complexity of figuring out what to do with the remains of an industry on which the entire global economy currently depends.”

– Issues in Science and Technology

“Besides her exemplary and comprehensive survey of current and near-future decarbonization technologies, one of the strengths of Buck’s approach to narrative nonfiction is the treatment of an issue often too complex for individual imaginations…Incisive commentary and strong prose.”

10 books to help us radically fight in a world on fire.