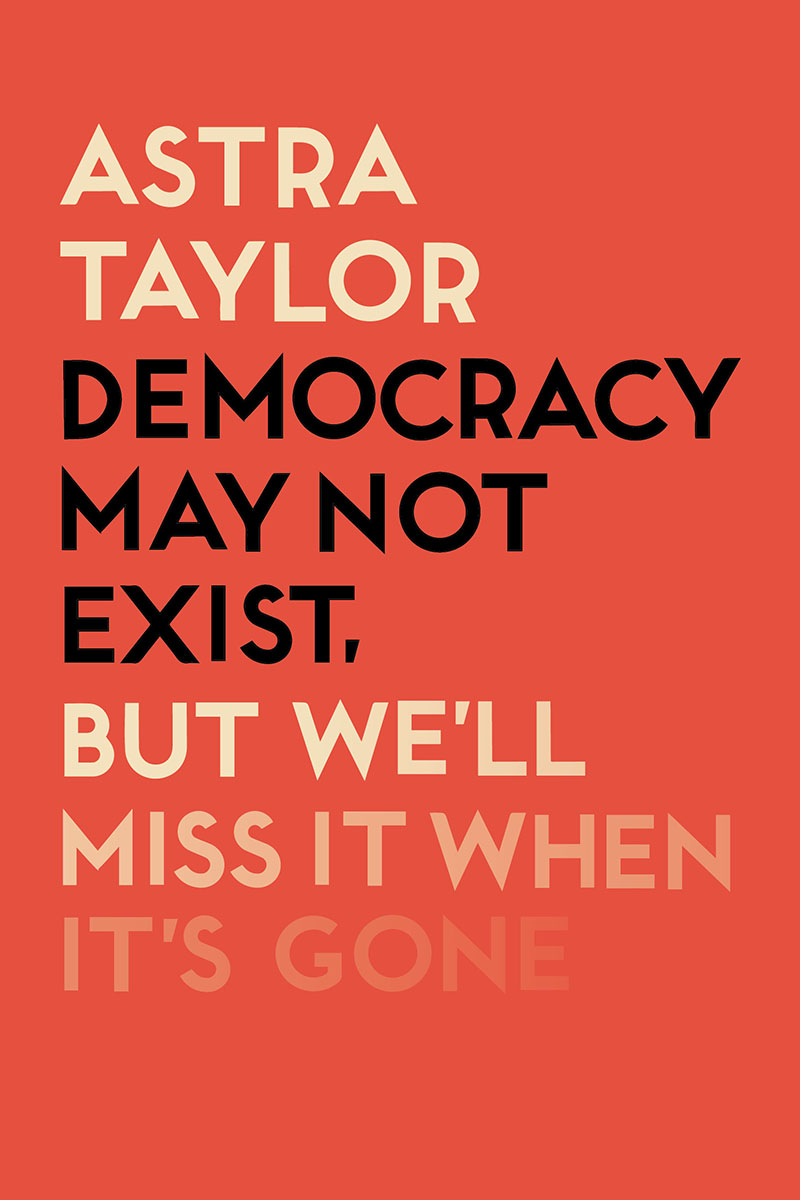 Did democracy ever exist? Why is it no longer possible?

Democracy is in crisis. In every major company it has been stole by elites or in the hands of strong men. In democracy’s name we see a raft of policies that spread inequality and xenophobia worldwide. It is clear that democracy—the principle of government by and for the people - is not living up to its promise.

In fact, real democracy—inclusive and egalitarian—has in fact never existed. In this urgent and engaging book, Astra Taylor invites us to re-examine the term. Is democracy a means or an end? A process or a set of desired outcomes? What if the those outcomes, whatever they may be—peace, prosperity, equality, liberty, an engaged citizenry—can be achieved by non-democratic means? Or if an election leads to a terrible outcome? If democracy means rule by the people, what does it mean to rule and who counts as the people? The inherent paradoxes are too often unnamed and unrecognized. But to ignore them is no longer possible.

Democracy May Not Exist, but We’ll Miss It When It’s Gone offers a better understanding of what is possible, what we want, and why democracy is so hard to realize.

“Moths never reach the moon, but they navigate by it; we humans may never reach democracy, Astra Taylor tells us, but we navigate by its ideals. This is a beautiful, revelatory book about ideas and how they matter in everyday life, by the only writer who could herself navigate so gracefully among factory workers, contemporary economics, and ancient Athenian history.”

– Rebecca Solnit, author of Men Explain Things to Me

“Astra Taylor is a rare public intellectual, utterly committed to asking humanity’s most profound questions yet entirely devoid of pretensions and compulsively readable. Now she plunges deep into the crisis that underlies so many others: the sorry state (and the exhilarating promise) of this thing called democracy. At once richly historical and immediately relevant, this wise, lucid and unflinchingly honest book deserves to be at the center of public debate.”

– Naomi Klein, author of No Is Not Enough

“What a lot of trouble democracy has been! Over the years it’s been hijacked by its enemies, its reforms have backfired, it has evaded challenges, it has refused to heed its prophets. But as Astra Taylor reminds us in this timely and sagacious book, there is no substitute. The fate of the world depends on it.”

“What is this thing called Democracy? Google the question and you will exceed one million hits. But for an honest and illuminating answer, read this book?every single word. Searching, lucid, visionary, Astra Taylor takes a deep oceanic dive into the history, meaning, uses, and promise of democracy?moving from Plato’s Greece to Syriza’s Greece, from the Global South to post-Communist East, from slavery to fascism, liberalism to neoliberalism, Occupy to the Commons. She knows what most political scientists don’t: that democracy is a promise unfulfilled, and in our strivings to achieve it nothing is guaranteed. But we can’t live without it.”

“A brilliant, deeply learned discourse on democracy, equality, and how the second might save the first, by one of the most incisive thinkers on participatory politics today.”

– Molly Crabapple, author of Brothers of the Gun

“An impressive contribution to this anxious re-examination of political assumptions and practices . . .Displays considerable intellectual nimbleness”

“A collage of people, voices, eras, and emotions—[Taylor] covers the suffering of communities as well as their triumphs in solidarity.”

“Astra Taylor's new book - sequel to her brilliant The People's Platform - is appropriately stellar. She embodies the right or rather the left sort of democratic engagement as both documentary filmmaker and critical analyst alike. Her unshakeable belief in democracy as a viable project of collective self-rule is indeed a radical act. Bring it on.”