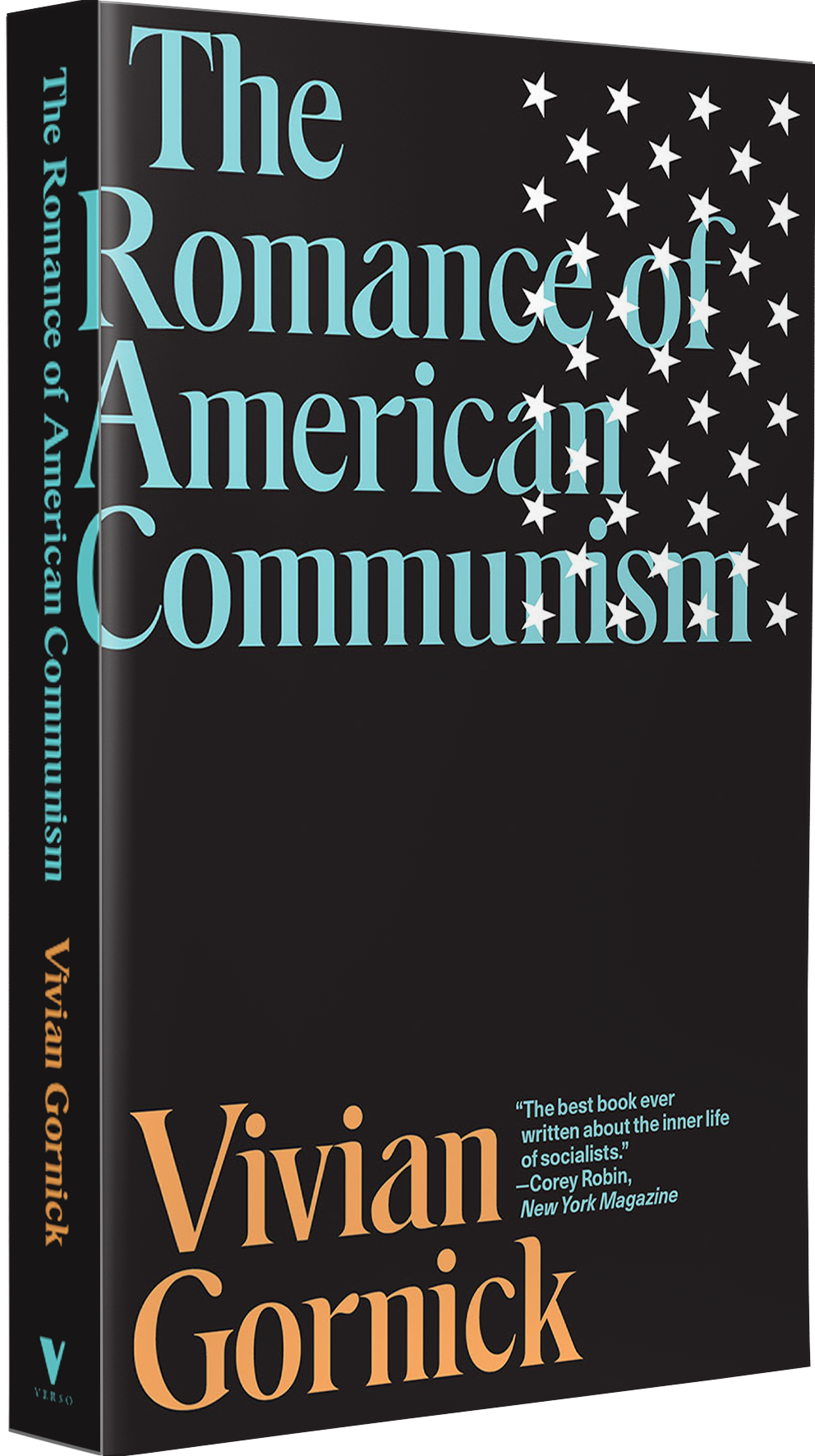 So begins Vivian Gornick’s exploration of how the world of socialists, communists, and progressives in the 1940s and 1950s created a rich, diverse world where ordinary men and women felt their lives connected to a larger human project.

“When first published in the 1970s, Vivian Gornick’s book helped to launch her distinguished career as a writer and humanized, explained and, yes, romanticized, a generation of American radicals … Thanks to the dysfunctionality of American capitalism, socialism has reentered the American political vocabulary. Gornick introduces us to a slice of history we need to know.”

“Gornick’s language is so fresh and so blunt; it’s a quintessentially American voice, and a beautiful one.”

“I first read The Romance of American Communism in the early eighties, and it has been for many years the book I would rescue if my house was burning down. I based the the narrator of my first novel, The Cast Iron Shore, on the character of ‘Diane Michaels”, a vain shallow woman for whom communism had made her better than she was - ‘it could all have been so much worse.’ Vivian Gornick explores the passion of ideas rather than the ideas themselves, how they make us human. This book has languished out of print for far too long.”

“A profound guide to the ecstasy and despair of living a life structured by political commitment. These accounts of ordinary Communists will make you ache for such a coherent and purposeful world, even as Gornick shows with enormous sensitivity how it all fell apart. In our new era of political intensity, everyone should have this subtle and exquisite book on hand.”

“Her unrepentant belief in strong feeling as the heartbeat of any political approach to the world explains why, though many good histories of American communism have appeared since Romance, none have captured, elevated, and lit up the experience in quite the same way.”

“[Gornick] presents her interview subjects like characters in literature, as the protagonists of their own experience, and, for that reason, the book is not simply documentary but a work of literature, too, rich, moving, and contradictory.”

“Most brilliantly evoked, however, is the exhilaration of conversion and the soul-expanding experience of finding a cause … again and again people speak of the sense of purpose and meaning they derived from being communists; they speak of a process of “becoming” and a sense of “wholeness”: a cohesion between what they believed in and what they poured their life’s efforts into.”

“Romance is a color portrait against the black-and-white rhetoric of the Cold War.... The newfound interest in Romance speaks to a growing, shared desire to work, together, to extricate humankind from the trap in which it is now caught.”

“First published in 1977, Gornick's book feels as relevant now as it ever did. As new secular movements, from reactionary atavism to progressive social justice activism, capture our imaginations and provide us with a feeling of belonging, The Romance of American Communism, provides a valuable glimpse into just how vital these movements can be - and how potent they are at creating community.”

“Gornick’s task in Romance was clear. She wanted to rekindle [the] flame not for warmth but for illumination, to retrieve the truth of the communist experience, as it was lived from the inside, from the highbrow obscurantism of Cold War liberalism.”

“Gornick offers no blueprints, but she teaches us that we must address the slippery ingredient of the emotions of a committed political life by first recognizing and naming them. Besides being wonderful, The Romance of American Communism is also a bit strange because it is so seductive.”

“A passionate, unwieldy auto-ethnographic work that zoomed out from her own upbringing to encompass the everyday life of the Communist Party in the United States... Gornick [is] interested in the prefigurative aspect of political organizing, in which action in the present serves not just as a step toward change in the future, but also as a model for that change.”

“The lasting value of her work lies in her commitment to the question of what it means to feel ‘expressive’: to experience the feeling that tells a person ‘not approximately, but precisely’ who they are.”

“Extraordinary … More than a political writer, Gornick is an intensely social writer: usually classified as an ‘oral history,’ Romance can be described as a book of conversations that is also about conversation, and about the relationship between conversation and conversion.”

“A key go-to writer for those seeking insight on organised resistance in previous generations.”

“In its exploration of the emotions, relationships, love and heartbreak of political commitment, Romance is an engrossing book.”

An Interview with Vivian Gornick