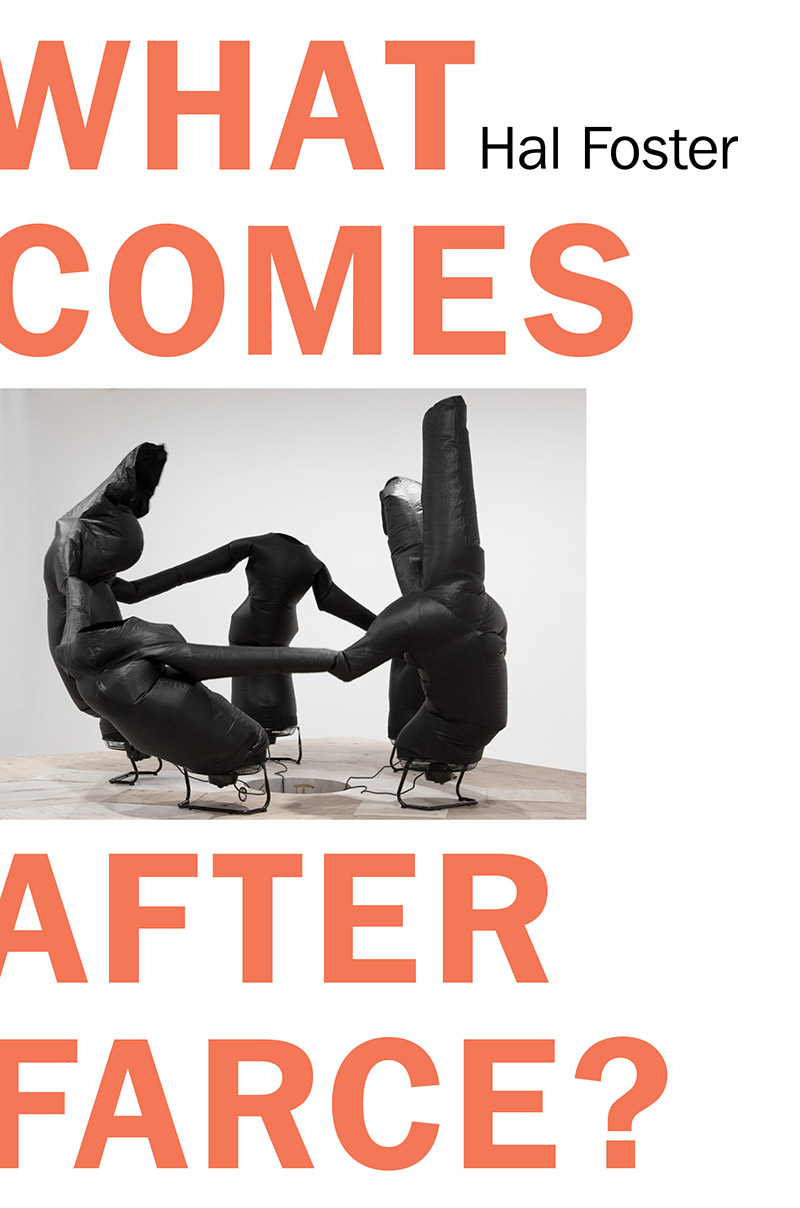 Surveying the artistic and cultural scene in the era of Trump

In a world where truth is cast in doubt and shame has gone missing, what are artists and critics on the left to do? How to demystify a political order that laughs away its own contradictions? How to mock leaders who thrive on the absurd? And why, in any event, offer more outrage to a media economy that feeds on the same?

Such questions are grist to the mill of Hal Foster, who, in What Comes after Farce?, delves into recent developments in art, criticism, and fiction under the current regime of war, surveillance, extreme inequality, and media disruption. Concerned first with the cultural politics of emergency since 9/11, including the use and abuse of trauma, conspiracy, and kitsch, he moves on to consider the neoliberal makeover of aesthetic forms and art institutions during the same period. A final section surveys signal transformations in art, film, and writing. Among the phenomena explored are machine vision (images produced by machines for other machines without a human interface), operational images (images that do not represent the world so much as intervene in it), and the algorithmic scripting of information that pervades our everyday lives.

If all this sounds dire, it is. In many respects we look out on a world that has moved, not only politically but also technologically, beyond our control. Yet Foster also sees possibility in the current debacle: the possibility to pressure the cracks in this order, to turn emergency into change.

“What Comes After Farce confirms what many have known for a long time: Hal Foster is indisputably the most important cultural critic writing in English today. No one else consistently offers such nuanced and cogent analyses of the tangled trajectories of the arts and media in this era of globalized financial capitalism. At the same time, few come close to Foster’s discerning familiarity with the work of the most venturesome artists, novelists, filmmakers, and architects or to his critical understanding of the difficulties and challenges now facing them in our current state of emergency.”

“These essays, mostly on art (and culture and politics and violence and technology) read as one seamless and disturbing account of a catastrophic historical epoch: our own. Hal Foster offers no solace but instead his deft and trenchant wisdom on how we got here.”

“Every word cuts to the quick in this extraordinary book. Foster shows that true criticism must be swift and surgical, but it must also hurt. He casts his relentless and unflinching gaze on the crises of our time, from new fundamentalisms to alternative facts, from cultural imperialism to perpetual war. And yet these essays do not pose the twenty-first century as a cycle of tragedy and farce, doomed to repeat itself, but as a threshold—through which art can, and perhaps must, take us.”

“The rapid pace of Foster’s prose captures the frenzied historical moment he is exploring, and his reluctance to offer simple answers acknowledges that multiple possibilities for reshaping our culture are currently ranged against each other. ... [this] lively and eloquent book convinces us that provocative artistic interventions remain possible.”

“Foster traces how artists have responded to the political situation, while also asking how art criticism should respond to artworks and, through them, the broader moment ... The title [What Comes After Farce?] is apt, not only because it invokes a great problem facing the left—how to imagine a future amid this mess—but also because it reflects the interrogative quality of the book’s texts.”

“The clarity of his prose is satisfying in itself ... While I was reading What Comes After Farce? I felt that I was in the hands of one of the most skillful critics at work today.”

“Magisterial ... [Foster possesses] a breathtaking erudition that he wears lightly.”

“Foster’s various texts move smartly and broadly across spheres ranging from sculpture and painting to cinema and literature, but most consistently he choreographs a dance between art and the larger culture that is its cradle. The articulation of one always imprints the other. Time and again in this respect, Foster is a pleasure to read for his sweeping statements that are still earned in their matter-of-factness, as when he makes short work of the contemporary art world’s spiraling expansion in tandem with shifting economic structures.”

Over the course of the next ten weeks, the Verso blog will become a node in the relational and intellectual infrastructure of Strike MoMA, weaving together actions on site with an ongoing platform for writing, thinking, and imagining in the furtherance of post-Moma futures.

Hal Foster on Alexander Kluge, emails from friends, and the problem with pandemic diaries.