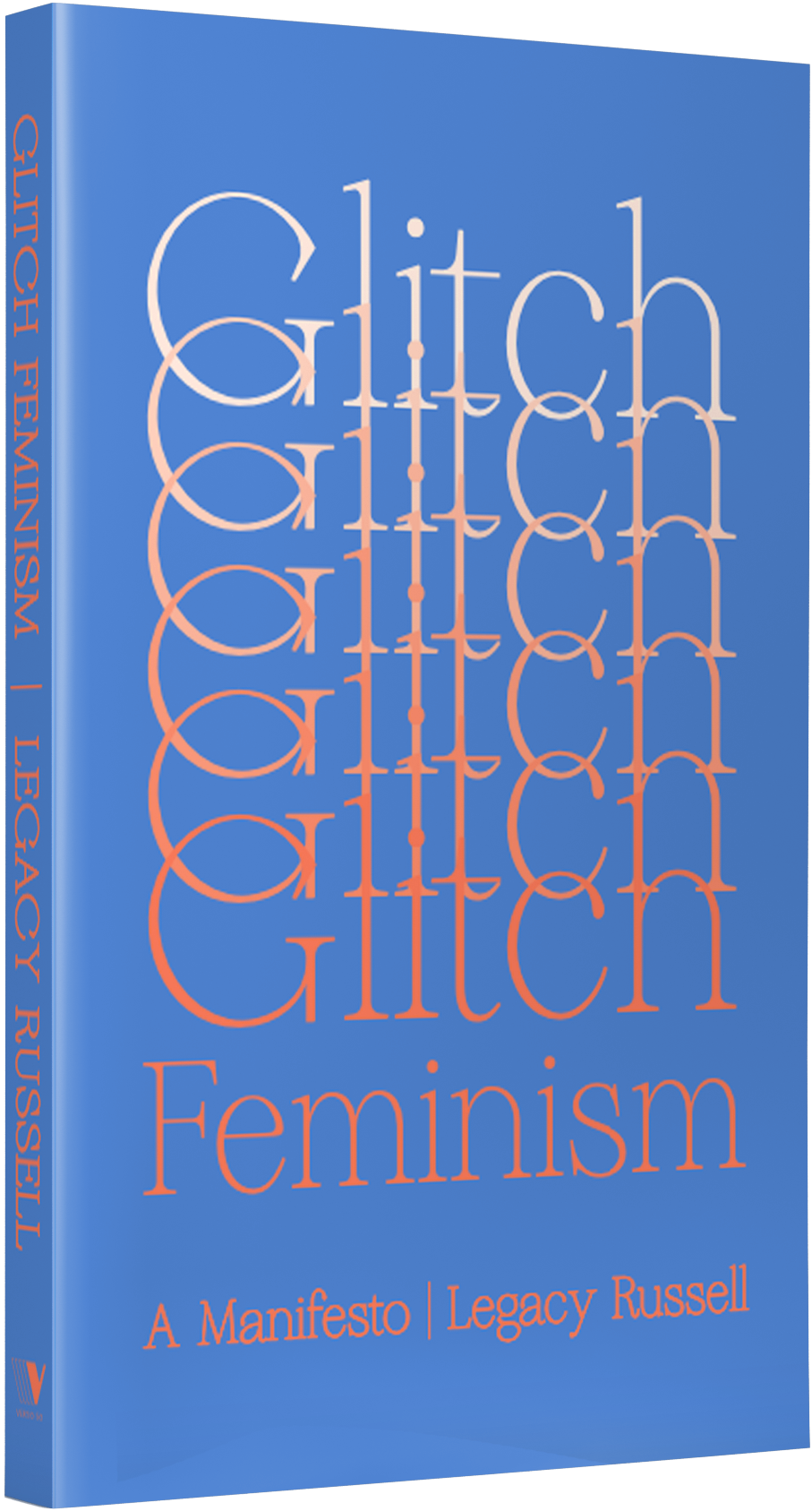 A new manifesto for cyberfeminism: finding liberation in the glitch between body, gender, and technology

A glitch is normally thought of as an error, a faulty overlaying, but, as Legacy Russell shows, liberation can be found within the fissures between gender, technology, and the body. The glitch offers an opportunity for us to perform and transform ourselves in an infinite variety of identities. In Glitch Feminism, Russell makes a series of radical demands through memoir, art, and critical theory, as well as the work of contemporary artists—including Juliana Huxtable, Sondra Perry, boychild, Victoria Sin, and Kia LaBeija—who have travelled through the glitch in their work.

Timely and provocative, Glitch Feminism shows how error can lead to revolution.

“Our software and our wetware are constantly glitching. How could it be otherwise? Rather than try for perfect order, let’s embrace the glitch and find out how else it all could play out. Let’s just admit we’re done with the old empire of imperatives about both flesh and tech and tune in to those who are playing in the ruins, hacking their way through to another life. This book takes you there.”

“Glitch Feminism offers wry insights into the opportunities inherent in the implications of formerly discarded traces of both ourselves and our culture. This fascinating, profound and engrossing book places Legacy Russell as one of the more provocative, radical and original thinkers of her generation.”

“Russell helps us understand that the components of our identity are in fact technologies. Glitch Feminism offers a powerful shift in mindset that empowers a generation of activist remixers.”

“‘A glitch is an error, a mistake and a failure to function,’ and with this warning, Legacy Russell takes us on a lightening tour through the terminologies and theories of AFK, IRL, Glitch Ghosts, Digital Dualism, Binary Bodies, and other markers in the current lingo of on-line criticism. She translates the Internet world as she lives it right now. Russell is an important writer to follow as she points out shifting viewpoints of Internet politics in real time.”

“A timely rethinking of cyberfeminism from an intersectional perspective—a deeply personal investigation of blackness and queerness in and through technology. This erudite, vividly-rendered text weaves astute discussions of contemporary artistic practices with personal narrative, capital-T Theory, and virtuosic riffs on twenty-first-century slanguage.”

“Russell’s book is as expansive and plural as the identities it explores, considering art, aesthetic theory, queerness, Blackness and anti-Blackness and, necessarily, the modalities and futures of activist practice.”

“Glitch Feminism offers technological failure, machinic anxiety, and seams in the interface as the very platforms from which we may begin to rework singular identities into inventive networks, proposing a reboot of feminist discourse. While channeling the boldness of the manifesto form, Legacy Russell offers a nuanced look at inspiring artists whose works reprogram systems of race, gender, and sexuality in the virtual places between living bodies and data bodies. Here, the paradox is the opportunity: the glitch shows you how things work, just as they don’t.”

“Combining art, tech, feminism, Blackness, queerness and critical theory, Russell offers an alternative to error and encourages us to embrace the glitch.”

“Luminous … [Glitch Feminism is] a gorgeous document of a number of mostly Black trans, queer, and gender-nonconforming artists working today, from E. Jane and Juliana Huxtable to Shawné Michaelain Holloway, and American Artist.”

“A pocketbook, guide, and beautiful envisioning of a radical art history … Glitch Feminism upends the notion of ‘glitch-as-error,’ reapplying the term in a cyberfeminist context to explore how the glitch disrupts the governance of race, gender, and sexuality.”

“Glitch Feminism portrays the online avatar as a laboratory where black, queer, and gender non-conforming artists have explored, experimented, and ultimately expanded notions of the self.”

“The feminism we need to break and remake the systematic regimes of power, not just in the digital world (and where is that line anyway?) but from the bottom up.”

“Compelling … Russell is concerned with how race, gender and sexuality influence and affect the way that our identities are performed, but she’s not in search of a simple answer or an easy way out. She asks whether we can free ourselves from our bodies, not just on the Internet, in a forum or on our phones, but all the time … What is radical and genuinely exciting is the conviction that [Russell] has in glitch feminism as a political project outside of the mainstream, as a form of collective joy and identity-making.”

“Glitch Feminism is a rallying cry, a recapturing of cyberfeminism oriented to include and spotlight the many queer and non-white voices who in their practice live out the awesome potential of an enmeshed digital feminism: the glitch … The deftness with which Russell wields language is artwork in itself. Like the vibrant contrast of the book’s cover, Glitch Feminism is a bright declaration, an ecstatic embrace of the new futures that lurk just behind hegemonic defaults.”

“The greatest pleasure of Russell’s thin book comes from its sense of solidarity and community with the queer POC artists and poets whose transformative work is never slight, and which Russell pulls from and praises in equal and sustaining measure.”

“[In Glitch Feminism] Russellis serving roses. But they are wild, shape-shiftingroses, outrageously lush and wondrous, and it iscertainly worth taking a moment to find out whatyet-unimagined visions we might have if we stop fora moment to smell them.”

“Most powerfully, Glitch Feminism suggests that by refusing to inhabit the binary online, the force of the binary in our lives ‘AFK’ is revealed. Glitch feminism as a practice can expose the gender binary for the strange, violent trick that it is, and unpick its role in keeping our world turning ‘under the sun of capitalism,’ as Russell puts it in characteristically beautiful prose.”

“A celebratory homage to glitch’s refusal of negrophobic, patriarchal, capitalist forms of production.”

“Grounded in theory (from Edouard Glissant to Donna Haraway) but a fast, percussive read, [Glitch Feminism] is also a guide to the growing field of art practices—notably driven by Black and queer creators—that dissolve the boundary between ‘internet art’ and physical performance, activism and community-building.”

“Glitch Feminism explores the socio-techno construct of gender and sexuality, and the generative potential of glitches, malfunctions or errors in the social machine. Within it all, identity is both fugitive and multiple, with representations of this provided by artists such as boychild, Sondra Perry and American Artist. The book’s parting shot: USURP THE BODY! BECOME YOUR AVATAR!”

“[Glitch Feminism is] an urgent, compelling read and one we should take to heart as the glitches promise to cascade in coming months and years.”

“An exceptional read that excels at offering a radical politics of the body. Russell writes convincingly, poetically and with urgency. Her content is wide-ranging, highly detailed, and—importantly—hugely enjoyable to read.”

“[Glitch Feminism] explores the experiences of queer, nonbinary, and trans BIPOC in digital and internet spaces (a terminally capitalist, patriarchal realm) through a record of boundary-pushing contemporary artists.”

“Glitch Feminism has become a critical resource since its publication, especially when brainstorming for the future, helping assemble the language we need to imagine and build a better tomorrow.”

“Russell’s literary debut issues a corrective to the predominantly white domain of cyberfeminist theory, shining a light on artists who leverage digital media to challenge systems of gender and colonialism.”

“Glitch Feminism is an internet text, bringing together references and anecdotes from visual art, cultural theory, and popular culture, creating a commonplace of resistance.”

“Russell holds liberation on her horizon. Her achievement amounts to what Toni Cade Bambara once affirmed as the very ‘task of the artist’ … The task for the artist whose community’s survival depends upon political change is ‘to make the revolution irresistible.’”

“Glitch Feminism offers [a] syllabus for resistance and change.”

“[Glitch Feminism] offers new possibilities away from the canon that originally defined aesthetics as a field of study, by transforming the failure to be recognized into a form of ideological and artistic affirmation.”

“A short critical work that acknowledges the radical potential of technology, while simultaneously presenting a deep, nuanced awareness of its current shortcomings, as well as our need to overcome them.”

“A pocket-sized book that packs a punch … Glitch Feminism is a tour de force, leaning into the paradoxical and using it to educate, inspire, and radicalize.”

“Russell thoughtfully frames every chapter around case studies of artists, writers, and fellow cyborgs who practice refusal and embody glitch—a perfect brew of glitch feminist theory and praxis … Glitch Feminism is a monumental publication in its (re)framing of glitch as feminist and as the power of ‘no.’”

Need a quick read? These short books will inspire and provoke.