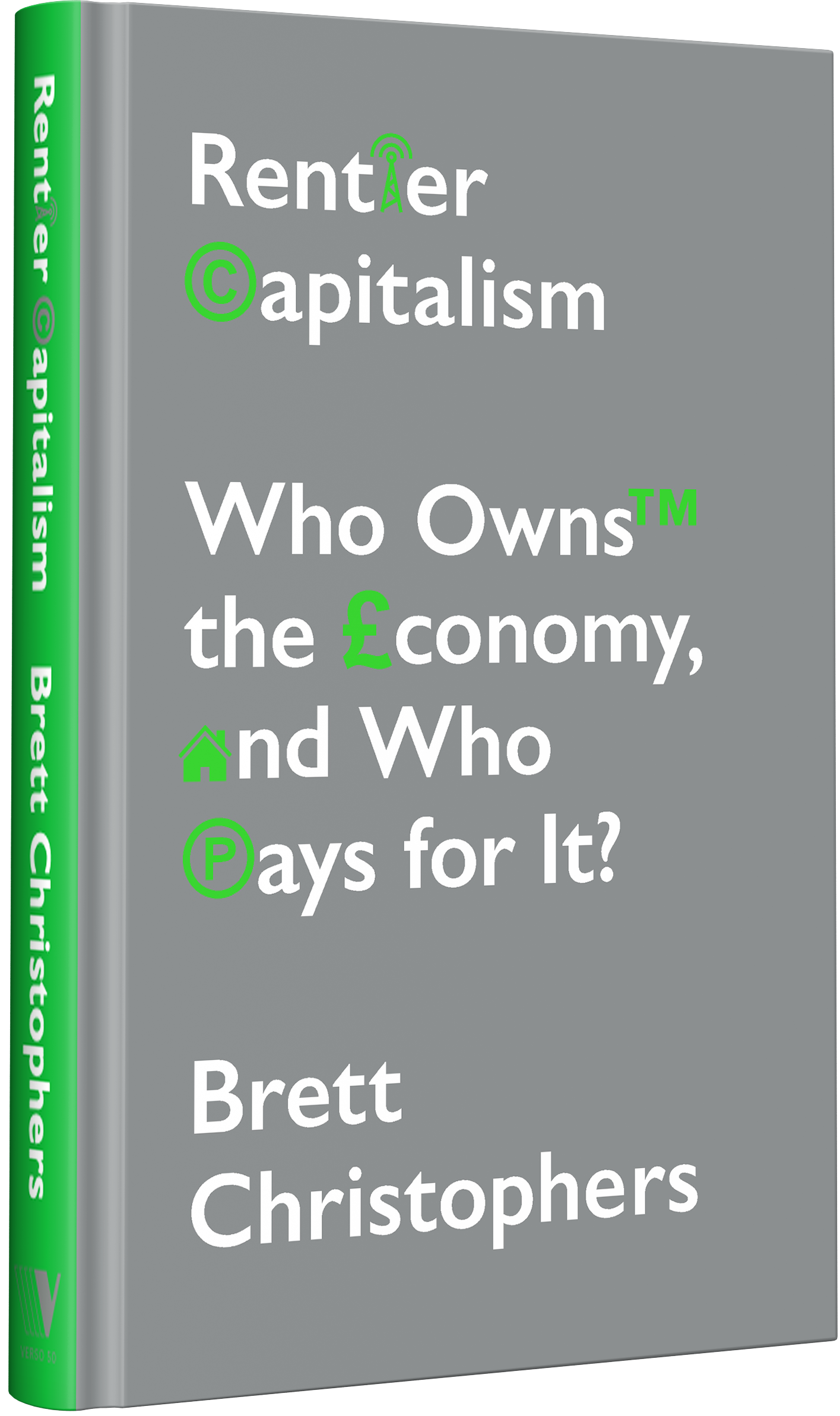 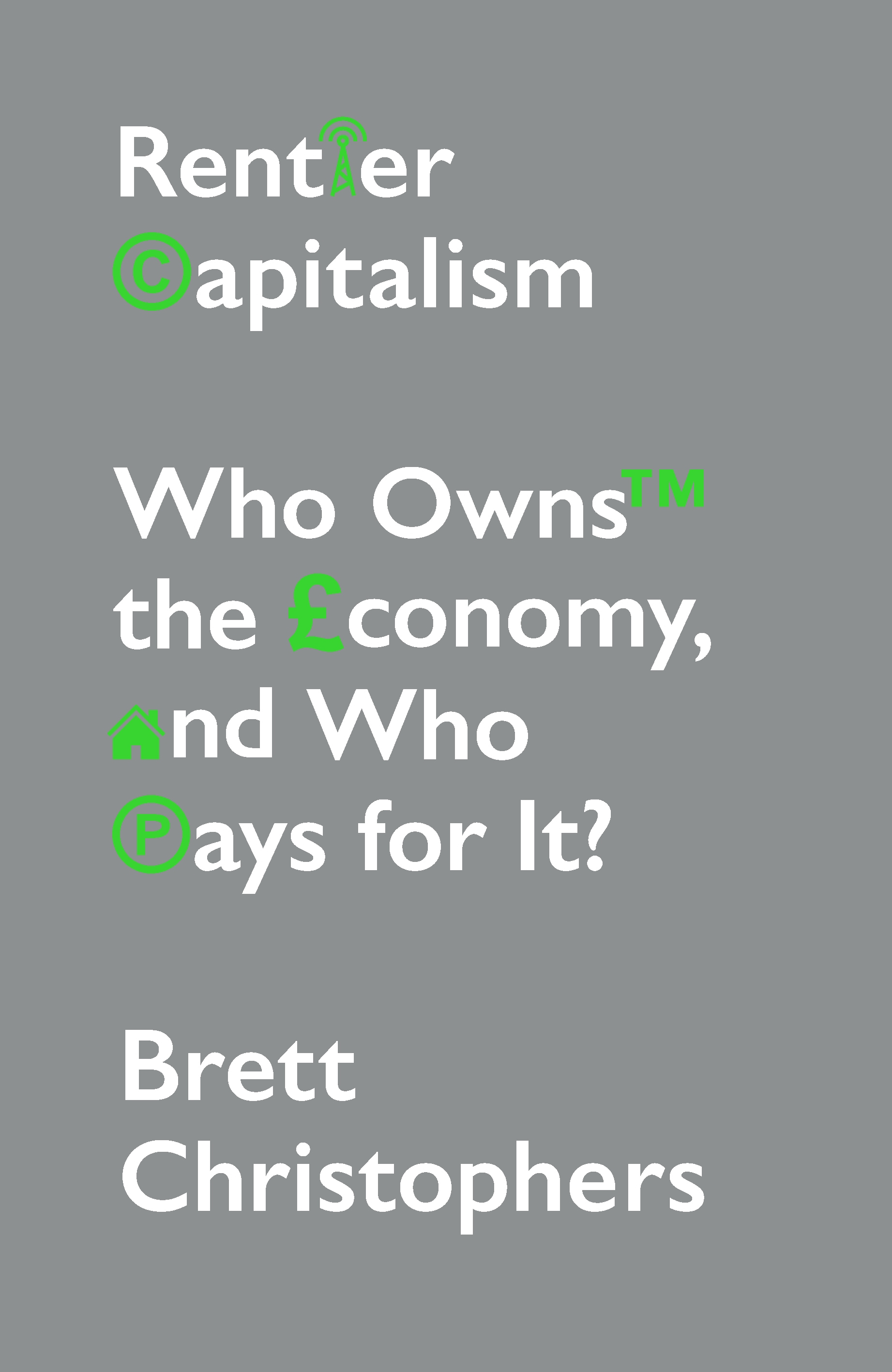 Available for pre-order. This item will be available on June 14, 2022.

How did Britain’s economy become a bastion of inequality?

In this landmark book, the author of The New Enclosure provides a forensic examination and sweeping critique of early-twenty-first-century capitalism. Brett Christophers styles this as ‘rentier capitalism’, in which ownership of key types of scarce assets - such as land, intellectual property, natural resources, or digital platforms - is all-important and dominated by a few unfathomably wealthy companies and individuals: rentiers. If a small elite owns today’s economy, everybody else foots the bill. Nowhere is this divergence starker, Christophers shows, than in the United Kingdom, where the prototypical ills of rentier capitalism - vast inequalities combined with entrenched economic stagnation - are on full display and have led the country inexorably to the precipice of Brexit. With profound lessons for other countries subject to rentier dominance, Christophers’ examination of the UK case is indispensable to those wanting not just to understand this insidious economic phenomenon but to overcome it. Frequently invoked but never previously analysed and illuminated in all its depth and variety, rentier capitalism is here laid bare for the first time.

“Our economic present is supposed to be characterised by free markets, unleashed creative entrepreneurship, the free production and flow of knowledge, and the frictionless mobility of capital and production. Yet as Brett Christophers shows in this incisive and vital study, the supposedly long-dead rentier is the characteristic capitalist of our age, not the entrepreneur of neoliberal theory. Thinking beyond the clichés, and the standard statistical summaries of the economy, he shows that instead of entrepreneurs there are exploiters of ownership and control who underinvest in the future. The new rentiers are everywhere, passively piling up the returns accruing from investments, from land, from housing, monopolistic utilities, consumer credit, and the control of platforms, natural resources and long-term contracts.”

“Empirically rigorous and theoretically insightful, Rentier Capitalism is a fascinating contribution to the debate on the changing face of British capitalism. Christophers makes a clear and compelling case that the profits of some of the largest British corporations stem not from production itself, but from their ability to exploit their control over critical resources to extract economic rents.”

“In this eye-opening, wide-ranging, and pedagogical book, Brett Christophers reveals the outsized role that rents play in today’s economy—from natural resources to intellectual property, from land to finance, from infrastructure to digital platforms. This is a must-read for anyone interested in understanding modern-day capitalism.”

– Gabriel Zucman coauthor of The Triumph of Injustice

“Empirically rich and theoretically astute, Rentier Capitalism offers a definitive account of a central feature of neoliberal capitalism: the resurgent power of unproductive assets. Spanning finance, housing, fossil fuels and the public sector out-sourcing racket, this will be a vital resource for anyone seeking to make sense of economic inequality and injustice in the UK and beyond.”

“If you want to understand the complexities of modern capitalism, there is no better place to start than Brett Christophers’ ambitious new exploration of rentierism. Unique in examining this phenomenon across its multiple facets, Christophers’ insightful analysis reveals the inner workings of rentier capitalism with grit and detail. This is essential reading for all serious students of political economy.”

“At last! For some years the great and the good have been muttering about the rentierisation of the economy, without really defining what they mean. What is rentier capitalism and what do we do about it? How did capitalism go from being all about ‘doing’ to all about ‘having’? These are some of the most important questions we should be pondering in the coming years. And now, finally, we have a book that defines this crucial trend and provides a forensic analysis of it. An insightful, fascinating read.”

“To understand the inequalities of wealth and power that define contemporary capitalism, read this important book. Rentierism shapes every sphere of our shared lives, Christophers shows, from energy to real estate, aerospace to health care, and entertainment to Airbnb. Tracing the different way each sector is organized to compel payments to those who monopolize its key assets, the book explains how rent takes multiple forms. It is this variability that allows capitalism’s extraordinary profits—and inequalities—to be generated at every juncture.”

“We are plagued by wealth and income inequality, declining productivity, falling investment, and polarized populations. But how are they related? Christophers answers that question, in my view definitively, by showing us how the economy we inhabit is a province of rents protected by power, in everything from finance and patents to carbon extraction and land ownership. Few books come along that fundamentally challenge the way you see the world. This is one of them. Christophers rewired my understanding of capitalism on a fundamental level. Piketty told us that the Trente Glorieuses were a stochastic blip, not a fundamental change. He saw that in the data. Christophers builds upon this insight a theory as to why that is that is both compelling and powerful—that the equilibrium state of capitalism is one of rent accumulation—and that such an equilibrium is a question of class power exercised through the state.”

“An essential read for anyone thinking about what UK governments might need to do differently as the pandemic upends the economy, and people’s jobs, without doubt feeding an appetite for some significant change in the philosophy of public policy.”

“An important and urgent contribution to our understanding of modern capitalism.”

“A striking reminder of the way—in the UK economy, in this case—concentration of ownership has continued to increase in recent decades.”

“Arguably one of this year’s most important books.”

“Rentier Capitalism is an autopsy report for a decomposing corpse. Christophers clinically dissects a corrupted body, before arriving at a probable cause of death. Of course, capitalism is still with us, but for those wanting to understand the system more, the better and sooner to end it, this book is essential reading.”

“It’s all crackling, shimmering stuff … you’ll start seeing rentiers everywhere, hearing them in every news bulletin, or envisioning how they all interlock like a lattice of money-pipes, situated at almost every choke point in supply, and all involved in massive anti-competitive behaviour.”

“From North Sea oil to the railways to water and electricity, this is a damning book about what successful British firms actually do—bid for privatised contracts, charge large rental fees, and sit back and let the profits come in from poor-quality, monopolised services.”

“Rentier Capitalism presents convincing evidence of the extent to which rent-seeking has become a central aspect of the British economy.”

“Masterful … a rigorously researched and theoretically insightful account of how large areas of capitalism have changed from ‘doing’ to having.”

Politics Theory Other #103 Rentier Capitalism: Who Owns the Economy

Brett Christophers, author of Rentier Capitalism, on the extraordinary dominance of monopolistic rent-seeking in the UK economy, in the latest episode of the Politics Theory Other podcast.