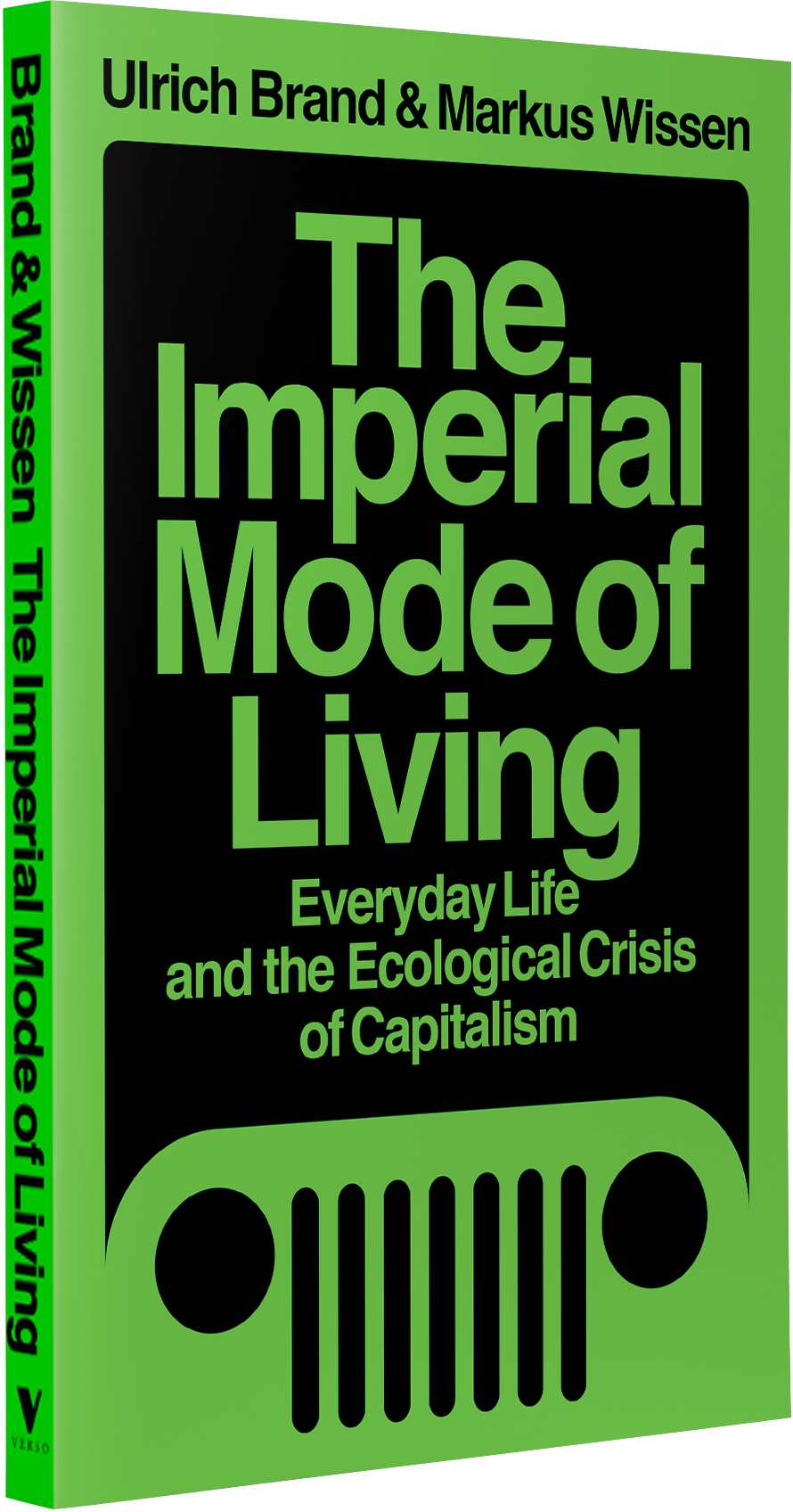 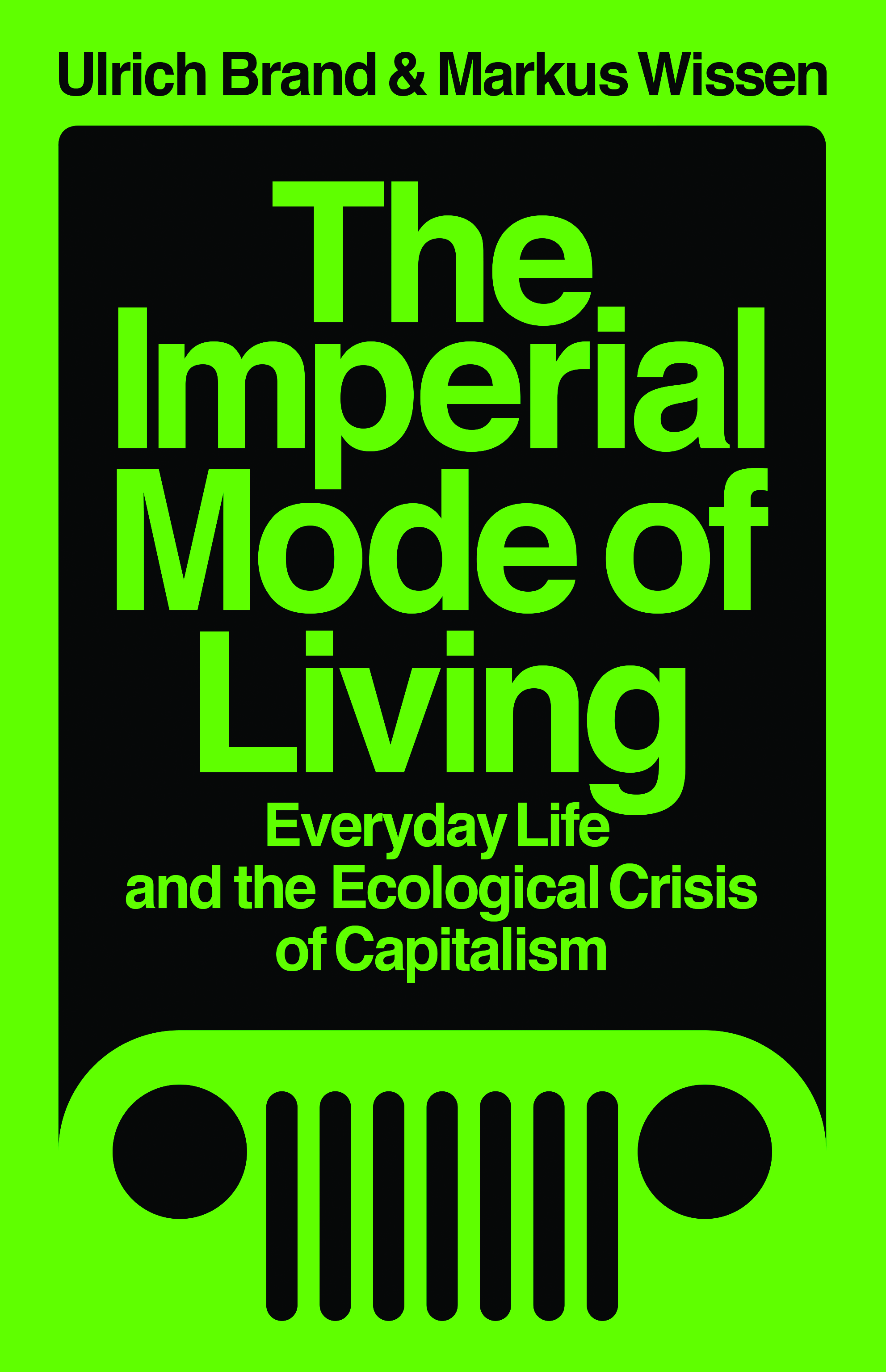 Our unsustainable life: why we can’t have everything we want

With the concept of the Imperial Mode of Living, Brand and Wissen highlight the fact that capitalism implies uneven development as well as a constant and accelerating universalisation of a Western mode of production and living. The logic of liberal markets since the nineteenth century, and especially since World War II, has been inscribed into everyday practices that are usually unconsciously reproduced. The authors show that they are a main driver of the ecological crisis and economic and political instability.

The Imperial Mode of Living implies that people’s everyday practices, including individual and societal orientations, as well as identities, rely heavily on the unlimited appropriation of resources; a disproportionate claim on global and local ecosystems and sinks; and cheap labour from elsewhere. This availability of commodities is largely organised through the world market, backed by military force and/or the asymmetric relations of forces as they have been inscribed in international institutions. Moreover, the Imperial Mode of Living implies asymmetrical social relations along class, gender and race within the respective countries. Here too, it is driven by the capitalist accumulation imperative, growth-oriented state policies and status consumption. The concrete production conditions of commodities are rendered invisible in the places where the commodities are consumed. The imperialist world order is normalised through the mode of production and living.

“An essential political read for our times. Spelling out the brutal contradictions of the ‘imperial mode of living’ and its ‘green economy,’ Brand and Wissen invite the reader to consider a ‘solidary mode of living.’ Here, sociability and sustainability can be joined, and hopefully celebrate the rich plurality of global cultures.”

“This lucid articulation of ‘the imperial mode of living’ as a pathbreaking concept, helps us to better understand the continuing neo-colonial relations of production and consumption between the Global North and South. It shows their devastating social and ecological consequences, and why ‘green economy’ like approaches will not save us and the planet. Rather, systemic, fundamental alternatives are needed, and this book brilliantly demonstrates why.”

“Proudly wearing the cloaks of what they call revolutionary Realpolitik and radical reformism, Brand and Wissen offer both a bracing and radical assessment of the current ecological crisis and a roadmap of the pathways from fossil capitalism. The imperial model of living saturates everyday life resting upon the unlimited appropriation of resources, a disproportionate claim to global and local ecosystems and sinks and cheap labor from elsewhere. Yet the concrete production conditions of consumed commodities and their environmental destructiveness in the Global North and South alike are typically invisible, rarely crossing into critical reflection. The Imperial Mode of Living offers a brilliant analysis of how and why this sense of normality is produced in a time of multiple and overlapping crises, and how such a mode of living simultaneously creates these crises and stabilizes social relations in the countries where its benefits are concentrated. A tour de force.”

“The Imperial Mode of Living introduces a much needed addition to our understanding of imperialism by looking at the ways in which global structures of imperial domination, extraction, and production have created consuming classes with imperial lifestyles that threaten the ecological survival of the planet. It also helps make sense of the new phase of imperial domination and extraction of the global South through engendering consuming classes in both the global North and South. By making visible the taken-for-granted daily practices of consumption and production and linking them to imperial structures, Brand and Wissen have produced an indispensable contribution.”

– Michelle Williams, Professor of Sociology and Chairperson of the Global Labour University Programme, University of the Witwatersrand (Wits), South Africa

“Brand and Wissen assert that it will only be possible to overcome the destructive global imperial mode of living by changing the current ways of working and of consumption, and by putting solidarity into practice across society. The German-language publication of the book garnered a discussion that was both broad and intensive, precisely because the authors insist on the need to rethink social transformation beyond hitherto concepts of reform or revolution.”

“The Imperial Mode of Living is a very enlightening and also useful conceptual tool to connect the mainstream essentialist criticism of capitalism and a critical analysis of the everyday life of people within it. With the help of it, we can have a better understanding of the political and economic dynamics of contemporary capitalism, a globalized as well as ‘universalized’ system or hegemonic mode of living, which constitutes a great challenge for the emerging global Green-left politics.”

“This book vividly illuminates what imperialism means today, elucidating the deep structures of social and ecological injustice on which prosperity is currently premised. Eschewing simple moral appeals, the book superbly threads together the cultural and economic forces that make the richer parts of the world feel comfortable with the status quo. Brand and Wissen lay the groundwork for a much-needed shift in the cross-border conversation over alternatives.”

“Coming out of the Corona virus crisis, there has to be a radical transformation in the way that we live. This book is an excellent way into the discussion of the mode of living that is destroying the earth. A solidary mode of living or authoritarian neo-liberal corona capitalism: that, the authors suggest, is the choice we face. No debate could be more important.”

“The Imperial Mode of Living is a powerful contribution to the Left’s strategic debates worldwide. Its bold and controversial thesis on the everyday implications of global economic and ecological inequality deserves to be discussed widely.”

“A pathbreaking thesis—and a truly essential reading for making sense of the ‘global constellations of power’ that shape the world we live in. Looking at the socio-ecological contradictions of Western societies from the perspective of their manufactured elsewhere, and the normalized violence of extractive relations—this book magisterially complements the tradition of anti-imperialist, ‘revolutionary Realpolitik’ (Rosa Luxemburg).”

“In the tradition of debates about imperialism, this book emphasizes its effects on the crucial level of everyday life and, more broadly, interrogates what constitutes our modes of living today. Bringing together consumption, extractivism and production, Brand and Wissen provide an updated reading and multilevel map not only of capitalist exploitation, but also of the underlying political elements behind migration, the rise of the right and the urgent need to rethink class and ecology from the point of view of social reproduction. Through the notion of themode of living as a constellation of elements, this book is a renewal of anti-imperialist theory.”

“An accessible and deep examination of imperialism’s historical and present construction of a global economy designed to not only dominate the peoples and nations outside the capitalist core, but also to keep that economy’s ecological destructiveness in those nations, too.”

“In her great work of 1913, Rosa Luxemburg had shown that the accumulation of capital is only possible if there is an outside that enables the preservation and development of the inner core of the capitalist mode of production. Inevitably capitalism is an imperial order. Ulrich Brand and Markus Wissen link this insight of Luxemburg to the fact that the mode of living, including desires, everyday production and consumption patterns such as mobility in the centers of modern capitalism are also imperial. They describe the strategy for an alternative of a solitary mode of living, the emergence of which requires nothing less than a new Great Transformation beyond capitalism.”

– Michael Brie, Head of the Scientific Advisory Board of the Rosa-Luxemburg-Stiftung

“This book is a must read, particularly poignant for scholar working on consumption and sustainability. The concept of an ‘imperial mode of living’ captures the idea that power relations permeate both everyday life, and political as well as economic spheres. Mundane and routine practices, performed without much reflexivity—such as driving a car or preparing a meal—reveal broader social inequalities and forms of environmental deterioration that become normalized, accepted, even respected, and thus difficult to change. From describing the problem and introducing the concept, the authors then lead us down a promising avenue: that of solidarity and social learning. Such measures are not the sole remit of heroic individuals, however, they require multiple and perhaps messy collective action. Because … Ya basta!”

“A book for these times … The Imperial Mode of Living not only offers a novel grasp of the links of everyday life to crises and inequalities on a global scale, but it also takes a stand for the necessity of politics from below.”