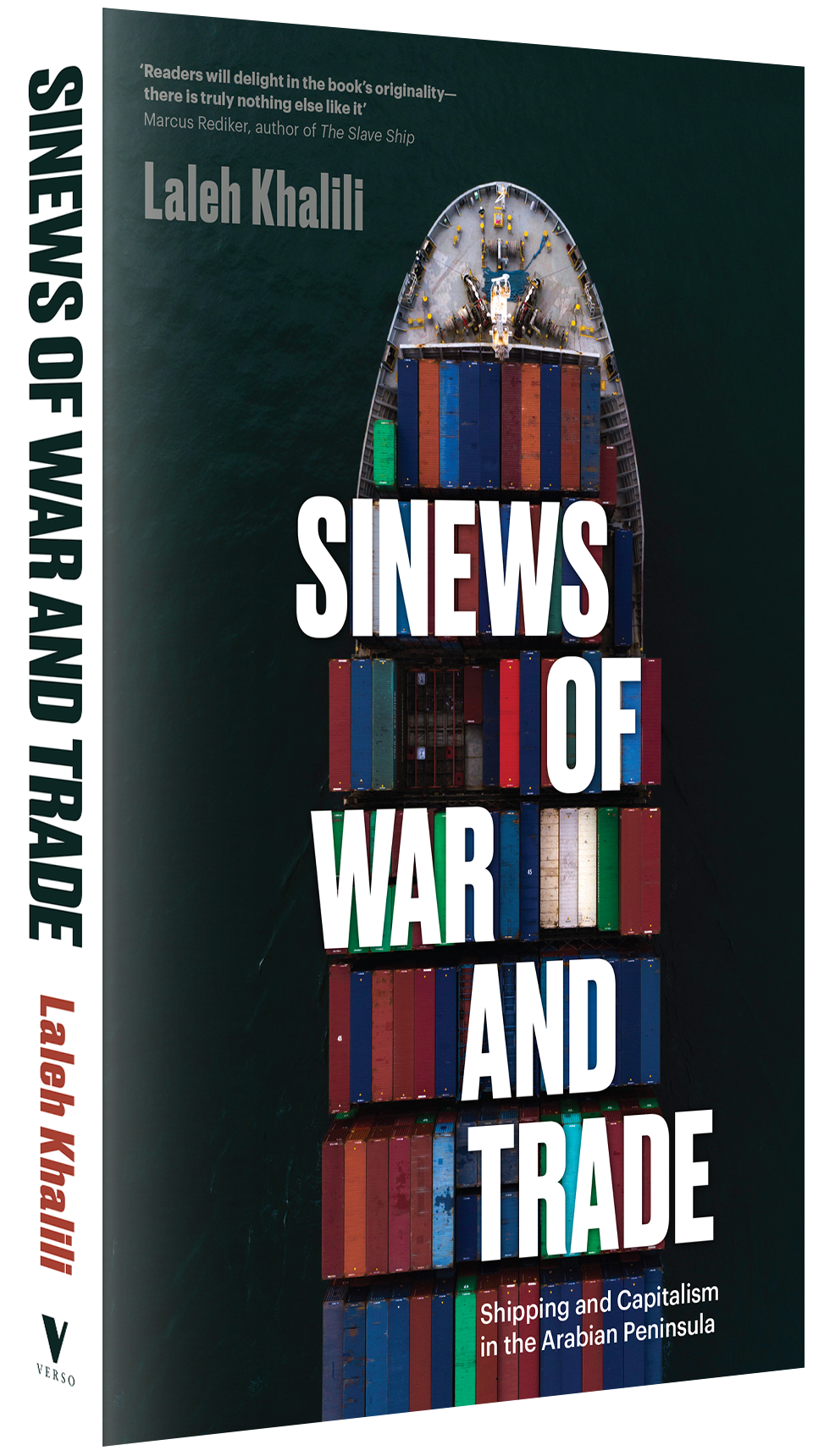 How shipping is central to the very fabric of global capitalism

In our networked world, the realities governing the international movement of freight are easily forgotten. But maritime transport remains the bedrock of trade. Convoys perpetually crisscross the oceans, carrying gas, oil, ore – indeed, every type of consumable and commodity. These movements, though practically invisible, mean that control of the seas is vital in an age when no nation can survive on domestic products alone.

Professor and author Laleh Khalili travelled the Mediterranean, the Red Sea, and the Indian Ocean aboard gigantic container ships to investigate the secretive and sometimes dangerous world of maritime trade. What she discovered was strangely disturbing: brutally exploited seafarers enduring loneliness and risking injury to keep the cogs of trade turning. In the Arabian peninsula’s ports, forbidden places encircled by barbed wire and moats of highways, the dockers struggle for benefits and political rights, as they have for generations. Environmental catastrophes threaten with increasing intensity and frequency. Around the oil-trading nations of the Middle East, a history of British colonialism, modern US imperialism, and local autocracies combine to worsen the conditions of modern seafarers, and piracy persists near the Horn of Africa.

From her research riding the sea lanes and visiting the major Middle Eastern ports, Khalili has produced a book that exposes the frayed and tense sinews of modern capital, a physical network without which none of our more abstracted webs and systems could operate.

“If the maritime industry represents the circulatory system of the modern global economy, then Laleh Khalili has offered us a uniquely insightful forensic assessment of how this capillary system took shape through history and the central role played by ports on the Arabian Peninsula. Sinews of War and Trade makes clear that these ports have been far more than just tacit intersections of international trade. They have played and continue to play a vital role in framing racial labour hierarchies, accumulating capital in specific hands, and reinforcing colonial regimes of profit, law and administration. Both lucid and nuanced, the book offers a masterful study in the ways that violence and security as well as licit and illicit trade, get negotiated in and by these ports. This is one of those rare pieces of academic research that is at once readable and accessible for the lay public while also making a genuine contribution to the relevant historical scholarship.”

“Laleh Khalili’s fascinating new book opens the window on another world, hidden in plain sight, a shadow world of ports and container ships that holds a key to the often violent workings of contemporary capitalism. To read Sinews of War and Trade is to understand the truth of Derek Walcott’s observation that ‘the sea is history.’”

“In this long awaited book Laleh Khalili makes brilliant contributions to every subject she touches: maritime history, labor history, military history, and the history of global capitalism. Readers will delight in the book's originality—there is truly nothing else like it.”

“Laleh Khalili is our Ismael, taking us on a fascinating journey under the surface of war and trade, into its world of infrastructure, the chains that bind humanity because of capitalism’s maddening search for the white whale of endless profit. Centred on the Arabian Peninsula, the story of big ships and bigger egos resonates across the oceans from port to port, an oily residue marking the ugliness of our times.”

“[Laleh Khalili] gives a nuanced account of many seas and lands. Written with meticulous attention to historical details, Khalili maps global capitalist trends that drew the shores of the Arabian Peninsula into global markets, bringing commodities, labour, pilgrims and adventurers to mark the history of a region that only began to attract attention with the discovery of oil. This book takes us back to old maritime trade, ports and people who shaped the history of the region. Much of this history is still very relevant to the present.”

“In this extraordinary work, Laleh Khalili takes us on an epic journey that is at once painfully timely and powerfully timeless. Centering this story of imperial trade and war on the Arabian Peninsula, Khalili illuminates how the very making of land and legal categories, the transformation of borders, the political and economic rights of workers, and entire planetary ecologies are remade through the ruthless impetus to move cargo and commodities overseas. The scale of this book is breathtaking but the story is intimate and expertly crafted, moving from entire coast lines to city streets and singular bodily movements. This is a poetry of place that exposes the power and violence of circulatory infrastructures of war and trade, while always insisting that another maritime world is possible.”

“Analysis of how international systems actually work, like Laleh Khalili’s study of maritime trade, uncovers a different world. The comforting phrases of international affairs in the face of policed seas, oligopolistic firms in strategic alliances with national governments, military-backed colonial dependencies and surveillance hegemony are mere fantasies distracting us from the realities of power and capital.”

“Little has been written about the sea trade in the Gulf. Laleh Khalili’s latest book explores the complex realities that drive this massive economy.”

“Powerful and unconstrained conceptual and poetic tools establish the shorelines of Khalili’s sea, then, and it is here that global capitalism takes its tightly woven place … Sinews is a stimulating read and a surefooted introduction to the subject, with deep pockets of research.”

“A book that is both enlightening and incisive in its critical commentary of shipping and capitalism in the Arabian Peninsula.”

“As Laleh Khalili shows in her meticulously researched book, the amphibious histories of trade, resources, and labour are inseparable from the power plays of imperialism and war.”

“Sinews offers one of the most outstanding recent investigations into the hard-to-narrate infrastructure of modern ports and their place in the patterns of global conflict and commerce. Khalili’s deft and forensic investigation brings into focus how the region was shaped and in turn shaped the global energy economy in the age of oil. Moreover, she draws a bright line between regional military and trade networks, revealing the human cost of ordinary logistics.”

“A richly revealing portrait of a complex industry that mingles both astonishingly archaic practices—routes plotted on paper charts, for instance, and port laborers locked in work camps—and dazzling technological triumphs.”

Liam Campling and Alejandro Colás, authors of the book Capitalism and the Sea, pick 5 books for understanding the politics of the world's oceans.