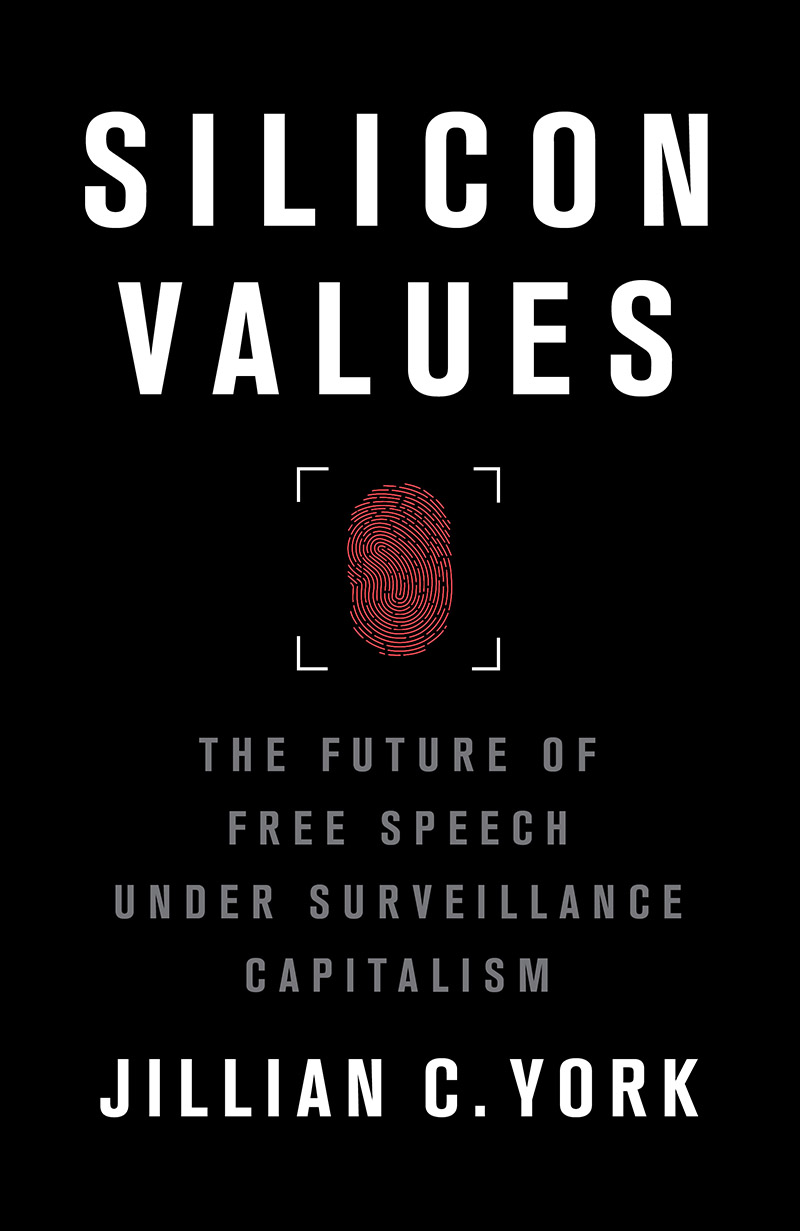 Available for pre-order. This item will be available on March 15, 2022.

What is the impact of surveillance capitalism on our right to free speech? The internet once promised to be a place of extraordinary freedom beyond the control of money or politics, but today corporations and platforms exercise more control over our ability to access information and share knowledge to a greater extent than any state. From the online calls to arms in the thick of the Arab Spring to the contemporary front line of misinformation, Jillian C. York charts the war over our digital rights. She looks at both how the big corporations have become unaccountable censors, and the devastating impact it has had on those who have been censored.

In Silicon Values, leading campaigner Jillian C. York looks at how our rights have become increasingly undermined by the major corporations’ desire to harvest our personal data and turn it into profit. She also looks at how governments have used the same technology to monitor citizens and threatened our ability to communicate. As a result our daily lives, and private thoughts, are being policed in an unprecedented manner. Who decides the difference between political debate and hate speech? How does this impact on our identity, our ability to create communities and to protest? Who regulates the censors? In response to this threat to our democracy, York proposes a user-powered movement against the platforms that demands change and a new form of ownership over our own data.

“The Internet has never been the utopia of free and equal expression its ideologues would have us believe it is. Jillian York’s vivid reportage shows us that the power to determine who gets to use it to speak, and under what circumstances, is now more concentrated—and less accountable—than ever before.”

“For years, Jillian York has been at the forefront of defending freedom of expression online. Her new book unpacks how Silicon Valley corporations have gained more control over speech than the most ambitious of governments and how ill-prepared they often are to use that power in ways that are just and fair. Entertaining, deeply informative and often very personal, Jillian’s journey into the world of online speech reflects on deep questions about how we should treat one another and who makes rules for societies in our digital world.”

“Jillian C. York gives us a personal, relevant, and accessible reflection on how our world has become governed by Silicon Valley. She takes us on an enjoyable journey from San Francisco to Tunis to Cairo to Berlin to trace the change from the early belief in maximizing free speech shared by the big tech platforms and we, the people, alike to the increasing policies of surveillance and control exercised by the platforms (and encouraged by most governments) that makes the struggle for free expression a much more demanding battle. Her conclusions offer hope and guidance as to what we need to do, not just for the sake of free speech but for the freedom to shape our very identity and agency.”

– Rasha Abdulla, Professor of Mass Communication at The American University in Cairo, and author of The Internet in the Arab World

“An incisive and compelling read that places Silicon Valley’s platforms and policies in a global context. York knows this terrain intimately,and she takes us to the key battlegrounds that have shaped content moderation,internet governance, and the political economies of online expression.”

“[Silicon Values] casts a wide-enough net over relevant topics and examples to be richly informative, while still managing to be straightforward in its style. York offers a solid entry point for those who have been following ongoing issues relating to the intersection of politics and technology.”

“Silicon Values is a trenchant critique of how platform censorship is enabled by surveillance capitalism … In an area that doesn’t lend itself to simple solutions, York’s insights lay an important foundation for ongoing intelligent discussion of the topic.”

“Silicon Values traces the haphazard and chaotic creation of the speech principles that now govern the platforms billions of us use to communicate every day … York’s book drags us back to the early, heady days of social media’s inception.”

“Simple, but not simplistic. In this book, the result of more than ten years of work in the field, York travels the world to pick out the most significant cases that show how the decisions made in the tiny Silicon Valley area of California play out on the ground”

“Timely and trenchant … York, who for many years has been international activism director at the Electronic Freedom Foundation, certainly knows her stuff. Her proposals for change, however, are clear and democratic, arguing for independent content moderation, social inclusion, and a user-powered movement against the handful of American men who currently run the show from Silicon Valley.”

“Timely and trenchant … [York’s] proposals for change … are clear and democratic.”

Our highlights from the past year, all 40% off.

Jillian C. York, author of the forthcoming Silicon Values: the Future of Free Speech Under Surveillance Capitalism, argues, in the aftermath of the assault on the Capitol, that users, not tech executives, should decide what constitutes free speech online.