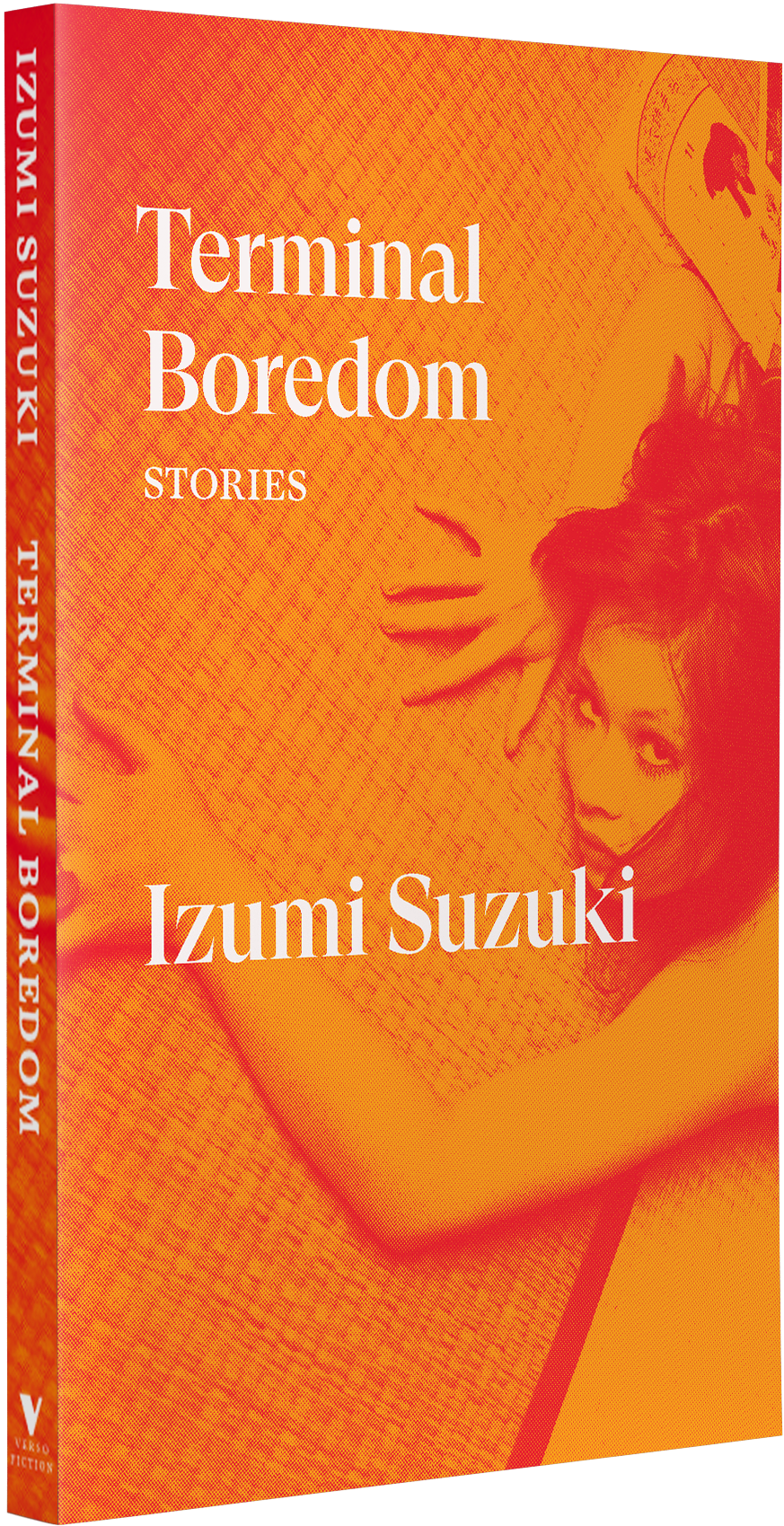 Named a Most Anticipated Book of 2021 by Thrillist, The Millions, Frieze, and Metropolis Japan

The first English-language publication of the work of Izumi Suzuki, a legend of Japanese science fiction and a countercultural icon

In a future where men are contained in ghettoised isolation, women enjoy the fruits of a queer matriarchal utopia—until a boy escapes and a young woman’s perception of the world is violently interrupted.

The last family in a desolate city struggles to approximate twentieth- century life on Earth, lifting what notions they can from 1960s popular culture. But beneath these badly learned behaviours lies an atavistic appetite for destruction.

Two new friends enjoy drinks on a holiday resort planet where all is not as it seems, and the air itself seems to carry a treacherously potent nostalgia.

Back on Earth, Emma’s not certain if her emotionally abusive, green-haired boyfriend is in fact an intergalactic alien spy, or if she’s been hitting the bottles and baggies too hard.

And in the title story, the tyranny of enforced screen-time and the mechanisation of labour foster a cold-hearted and ultimately tragic disaffection among the youth of Tokyo.

Nonchalantly hip and full of deranged prescience, Suzuki’s singular slant on speculative fiction would be echoed in countless later works, from Neuromancer to The Handmaid’s Tale. In these darkly playful and punky stories, the fantastical elements are always grounded in the universal pettiness of strife between the sexes, and the gritty reality of life on the lower rungs, whatever planet that ladder might be on.

“The work and messages of Ursula K. Le Guin, the author’s longer-lived contemporary, come to mind.”

“Terminal Boredom provides a historical capsule and an interesting mirror to the American science fiction of the [1970s].”

“The seven stories here are not only still relevant but remarkably fresh … brilliant.”

“Brilliant and often bleak … all shot through with a camp ethos, dark humour and kitchen-sink realism … in their brio and jagged urgency, these stories have, if anything, only gained in their alarming immediacy.”

“Suzuki is a daring writer and these stories will show the English-language world what she is made of.”

“Whether riffing on the poison of technology or about private feelings of loneliness and want, there is a psychic complexity to Suzuki’s fiction … Terminal Boredom is a reason for celebration.”

“If you’re into Kōbō Abe and prefer Ryū Murakami to Haruki you’ll not (as the title of this inaugural translation of Suzuki into English suggests), be bored.”

– The Millions (“Most Anticipated”)

“Weird and wonderful, unique and unsettling … You won’t put this one down.”

“Eagerly awaited … [Terminal Boredom transports] readers to worlds both familiar and unfamiliar, indulging our fantasies and fears of the future … Dark and slightly absurdist, this collection is a poignant rumination on the despair and isolation of modern society.”

“The stories chosen for this collection showcase an author whose interest in alienation and despair as well as playful literary exploration parallels the work of other ’70s SF titans such as Joanna Russ or Thomas Disch … Essential reading not only for those interested in Japanese SF, but for anyone interested in spiky, beautiful, and bleak literature.”

“A thoroughly likeable and engaging book.”

“One of the freshest collections I’ve read in years.”

“A vital addition to the science fiction canon in the anglophone world … If there is any proof needed that the future has ended, it is that these stories can speak to us so directly across the four decades since their writing.”

“There’s nothing boring about the short stories in Terminal Boredom.”

“Each of the worlds Suzuki creates is deep and complex, with many of the questions raised lingering long after the last page and making you crave more.”

“An engaging and highly-relevant collection of short stories that will resonate with many readers, especially fans of writers like Philip K. Dick, Kurt Vonnegut, and even George Orwell, but from a refreshingly female perspective.”

“Sure to be a treat for fans of Haruki Murakami, George Saunders, and the twisty genre experimentation of Black Mirror.”

“A welcome glimpse inside the mind of a writer whose talent has been overlooked for far too long.”

“Suzuki’s stories are reminiscent of the unhinged science fiction dystopias of the master of the craft, Philip K. Dick … [and] extend the canon of twentieth century science fiction.”

“Suzuki’s work, now released in English for the first time, marks an exciting moment. Its themes feel of-the-moment despite being written over thirty years ago, and yet they are also surreal—the imagined artificialities of the 1980s written as futuristic now mirror our mundane, modern technology.”

“Surprisingly contemporary … with pertinent musings on the mutability of gender and the elusive nature of identity.”

“With the use of speculative elements, [Suzuki’s] dark and playful stories highlight the realities of living on the lower rungs of society.”

“A vital addition to the science fiction canon in the anglophone world … If there is any proof needed that the future has ended, it is that these stories can speak to us so directly across the four decades since their writing.”

“At last, we have access to some of [Suzuki’s] most exciting works.”

“Terminal Boredom is even more striking and believable in 2020 than it was in 1980 … Suzuki’s feminist spirit is as relevant and her stories as piercing today as they were more than thirty years ago.”

“No matter how strange the fictional worlds of the future she manufactures, her reader would find something deeply familiar in the simple conversations of her characters.”

“Although they were written in the 70s and 80s, some of [the stories in Terminal Boredom] feel so fresh that it would be easy to mistake them as new … For its time, the writing is subversive, defiant, and unapologetic, and for our time, it is poignant and prescient.”

“Gets under the skin … The groundlessness of life, the absence of the big Other, is a disconcerting theme and a feminist perspective is explored in a highly speculative and punkish way.”

“Terminal Boredom is a subtle but sharp collection … and a worthwhile introduction to Izumi Suzuki’s work.”

“These are brash, clever, odd works of science fiction, propelled by an irreverent kind of up yours! energy, and yet also a deep worry for the state of life in twentieth-century Japan and also the planet itself.”

What has the Verso staff been reading this year?