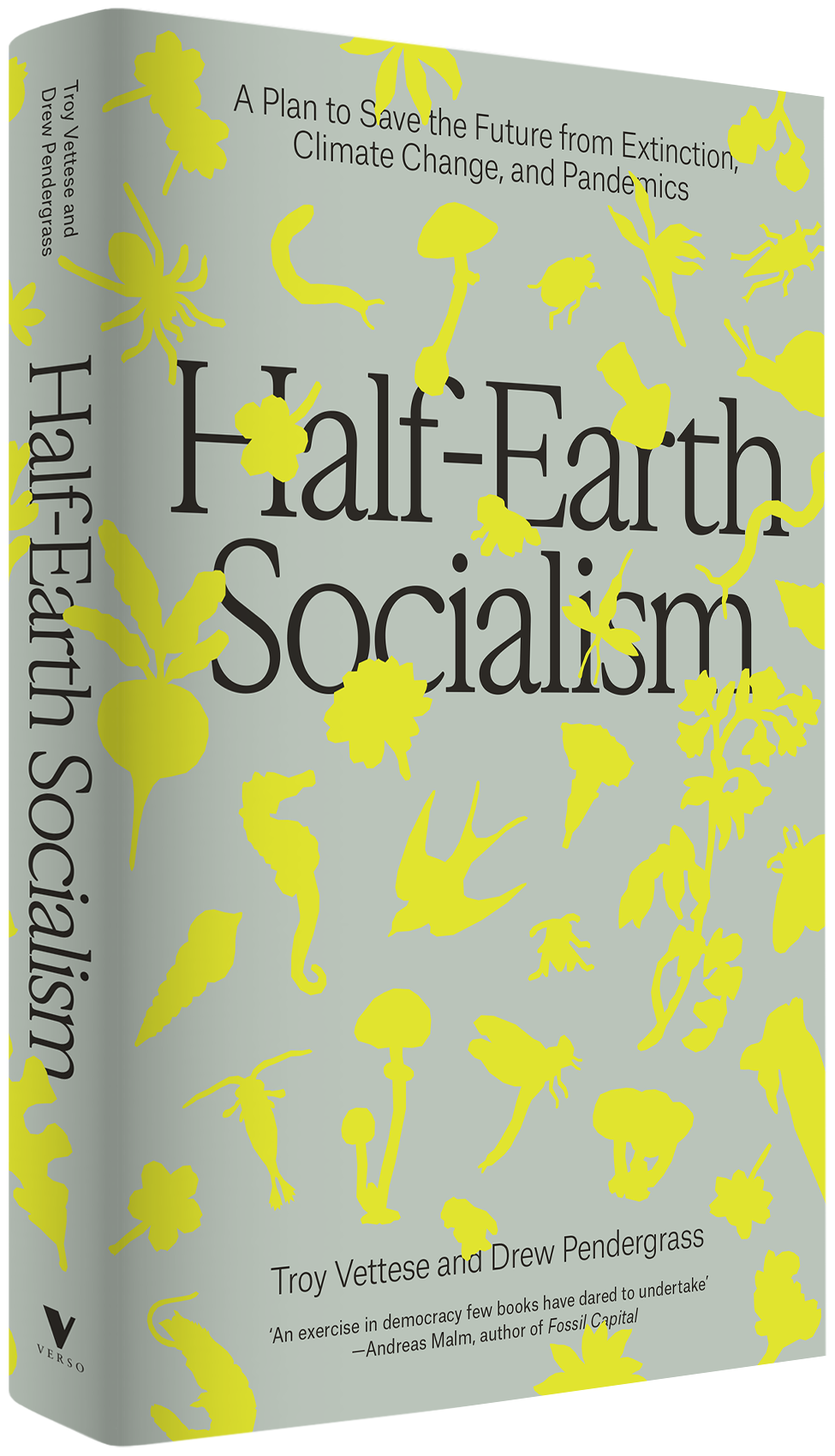 Over the next generation, humanity will confront a dystopian future of climate disaster and mass extinction. Yet the only ‘solutions’ on offer are toothless cap-and-trade programmes, catastrophic geoengineering schemes, and privatized conservation, which will do nothing to reverse the damage suffered by the biosphere. Indeed, these mainstream approaches assume that hyper-consumerism in the Global North can continue unabated. It can’t.

What we can do, environmental scholars Troy Vettese and Drew Pendergrass argue, is strive for a society able to ensure high living standards while stabilizing the environment: Half-Earth socialism. This means:

The authors collaborated with designers from the Jain Family Institute and Trust to create a video game based on the book, at play.half.earth.

“Half-Earth Socialism conclusively demonstrates how a liveable future requires a fundamentally different relationship to the Earth, the only home our species has ever known. A must read for post-capitalists and those who care about the climate crisis.”

“Capitalism is clearly destroying the planet. If socialists want to offer a real alternative to profit-driven catastrophe, they need to rethink deeply ingrained assumptions and abandon ruinous habits. Building a society that operates within ecological constraints requires an unleashing of our political imaginations, and this book helps us do just that. You may not agree with every word of this bold and provocative book, but it raises urgent and necessary questions that the left must grapple with before it’s too late.”

– Astra Taylor, author of Democracy May Not Exist, But We’ll Miss it When It’s Gone

“Vegan cookbook meets Minecraft, starring an economist of the Munich soviet republic as unlikely hero—here is a book unlike any you’ve read. Half-Earth Socialism flips the age of dystopias into a renewal of the genre of utopia. Unlikely to suit everyone’s taste, it empowers readers to write their own recipes for a future in peril: an exercise in democracy few books have dared to undertake.”

“The best way to subvert a dystopia is to plan a utopia. In Half-Earth Socialism, Vettese and Pendergrass delve into this vital work of practical dreaming. So what does a better world look like? Blending science, history, philosophy and fiction, the authors thoughtfully chart a possible future to avert the worst impacts of the climate crises. Importantly, beyond climate mitigation and adaptation, this book tackles the critical need to address large-scale system change. Read this book if you not only dream of saving the world, but want a plan for how to do it.”

– Ziya Tong, science broadcaster and author of The Reality Bubble

“Finally, the book we have been waiting for. A real plan, simple and elegant. Half the planet is re-wilded. Within the vision of this book, is admirable forensic research, the science, that can power a vegan socialist world. Up to now, the capitalization of nature, has successfully delivered profit for the few, at the expense of all life. Capital is indifferent to the cries from slaughterhouses, the roar of anguish of burning forests, the animals who cannot flee infernos and flooding, sea creatures drowning in oceans of plastic and chemicals. The neo liberal capitalist ship sails on, a soulless machine, extracting humanity from humans. We can no longer see many stars through the haze of pollutants, but the stars shine on, within the idea of utopian socialism. We don’t don’t want to go to the stars as colonizing billionaires, we want to see the stars. This remarkable book, points the way.”

“Moves fluidly between sharp polemic, technical detail and utopian climate fiction...Vettese and Pendergrass add weight to a growing movement of socialist environmentalists who put economic planning at the core of their proposals.”

“A radical vision of how to build a better world for all.”

“Refreshing ... Vettese and Pendergrass's is a humble utopia. There is solidarity, fulfilment, full bellies, and plenty of leisure time. Crucially, there is a climate in repair, which is more than enough to win me over in my darkest hours.”

From anticapitalist theory to abolitionist politics to the cult of Winston Churchill, these books will better your understanding of what happened this year.