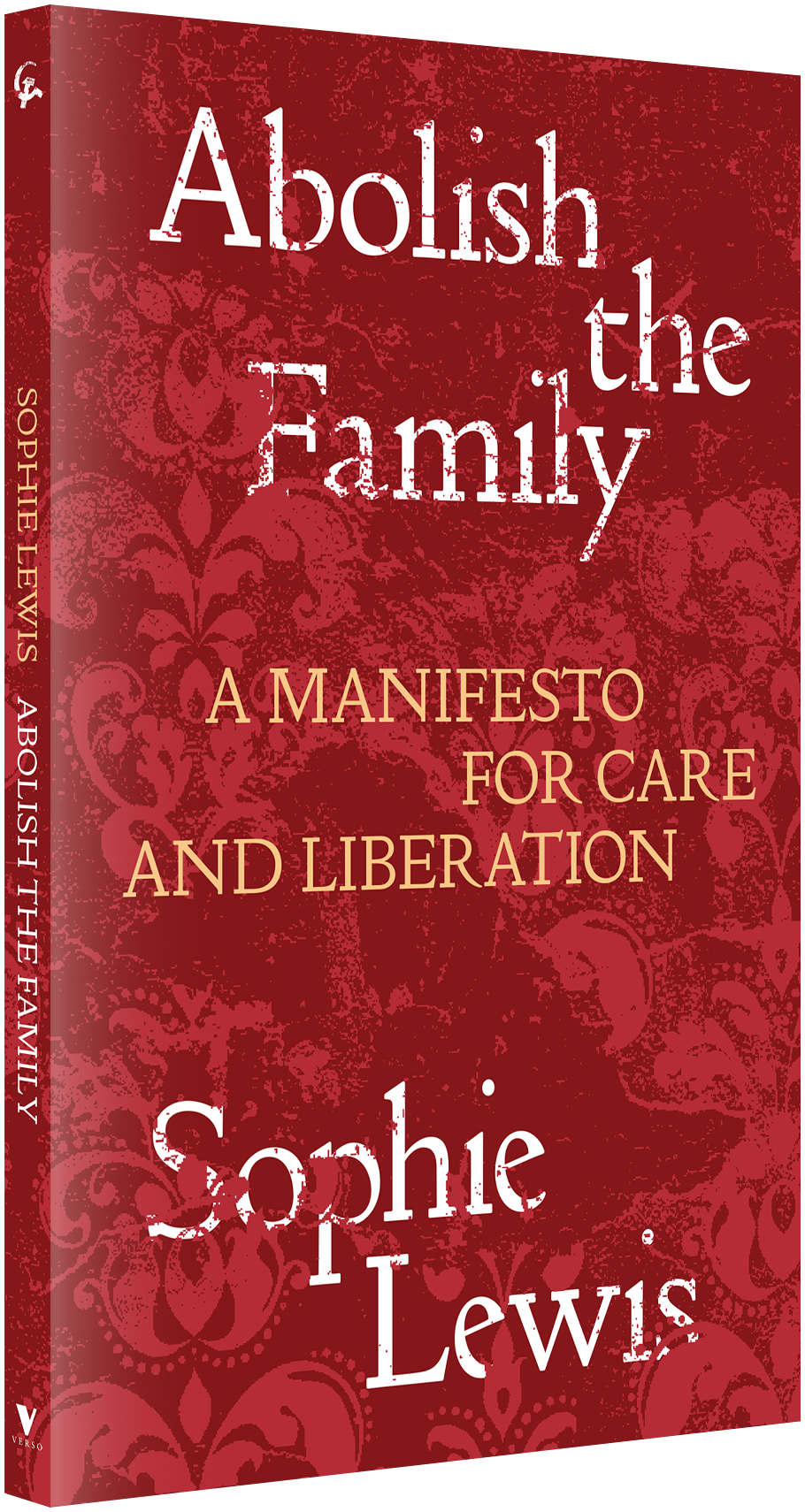 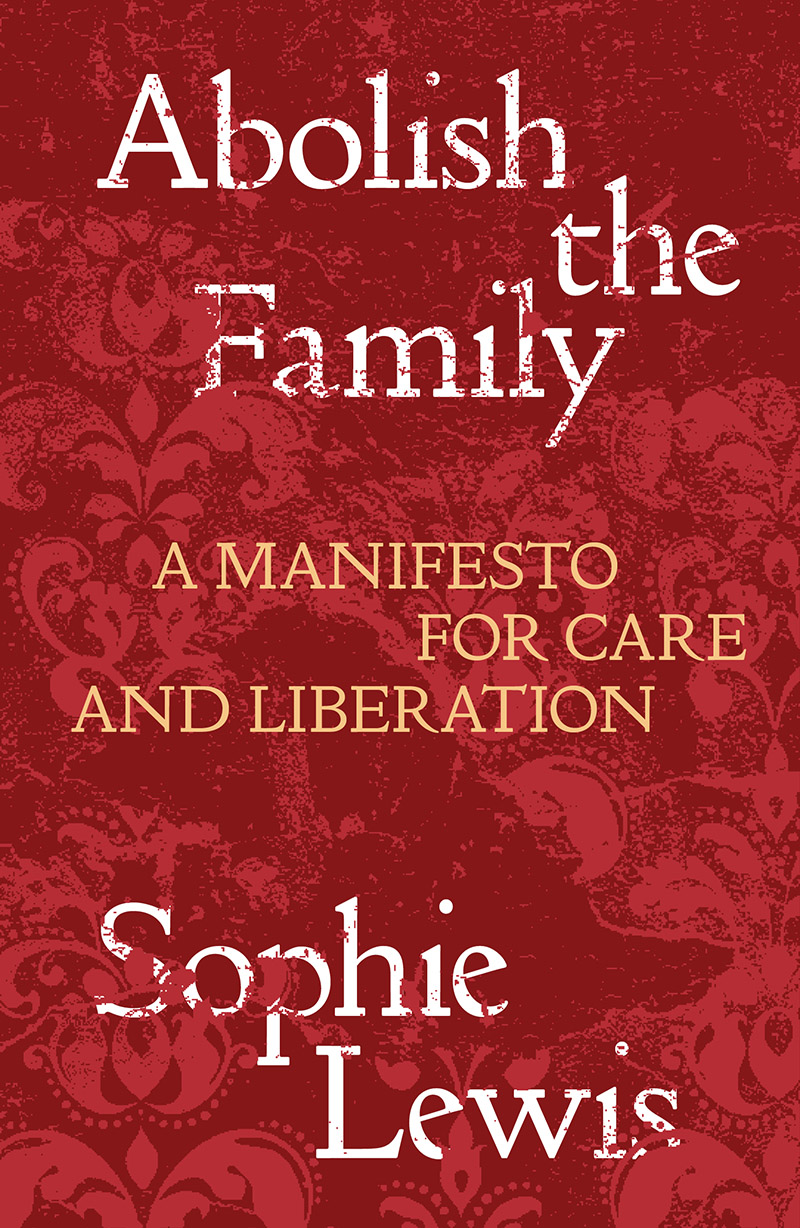 What if we could do better than the family?

We need to talk about the family. For those who are lucky, families can be filled with love and care, but for many they are sites of pain: from abandonment and neglect, to abuse and violence. Nobody is more likely to harm you than your family.

Even in so-called happy families, the unpaid, unacknowledged work that it takes to raise children and care for each other is endless and exhausting. It could be otherwise: in this urgent, incisive polemic, leading feminist critic Sophie Lewis makes the case for family abolition.

Abolish the Family traces the history of family abolitionist demands, beginning with nineteenth century utopian socialist and sex radical Charles Fourier, the Communist Manifesto and early-twentieth century Russian family abolitionist Alexandra Kollontai. Turning her attention to the 1960s, Lewis reminds us of the anti-family politics of radical feminists like Shulamith Firestone and the gay liberationists, a tradition she traces to the queer marxists bringing family abolition to the twenty-first century. This exhilarating essay looks at historic rightwing panic about Black families and the violent imposition of the family on indigenous communities, and insists: only by thinking beyond the family can we begin to imagine what might come after.

“Sharp, engaging, and bursting with intellectual energy, Abolish the Family is a triumph. Whether you come to this book as a critic of The Family or as its most ardent supporter, you're sure to find something within its pages to move, challenge, or provoke you. It's a joy to read, and I cannot recommend it highly enough.'”

“Sophie Lewis once again shines forth as one of the boldest thinkers of our current moment with this highly anticipated sequel to her groundbreaking Full Surrogacy Now. How might we understand caring, sharing, and loving outside the concept of kinship? In this energizing little book - part history and critical analysis, part manifesto — Lewis helps us understand family abolition as world-making rather than as a subtraction of infrastructure, and she does so with remarkable clarity, precision, and wit.”

– Sianne Ngai, author of Theory of the Gimmick: Aesthetic Judgment and Capitalist Form

“The idea of family abolition tends to provoke skeptical reactions: Can't families be a source of solidarity? Without families, who would we count on when things get tough? Shouldn't we protect vulnerable families, ostracized families, separated families? Sophie Lewis faces up to the hard questions without flinching, while ultimately steering us towards different ones: How else could we live, and who else could we be? Abolish the Family is a rigorously utopian, radically compassionate, unapologetically revolutionary manifesto, by equal parts thrilling and sobering. We all deserve better than the family, Lewis argues, and it’s up to all of us to build new forms of solidarity and care that reach beyond biology or even kin, even if we don’t know quite what they’ll look like. Abolish the Family will make you want to find out.”

“I am consistently dazzled by Sophie Lewis's work, which is both intellectually capacious and heart-expanding. Abolish the Family is a liberatory demand and a world-making project proposed here with revolutionary love and inimitable style. Without fail, Lewis clarifies, disrupts and inspires.”

– Natasha Lennard, author of Being Numerous: Essays on Non-Fascist Life

“What would it be like to imagine a communism not just of wealth but also of care, love and belonging? Where the full range of human needs are met without depending on the fragile bubble of the nuclear family? That institution we are all supposed to believe will be there for us - even though so many books and films detail all the ways in which it fails. This is the difficult yet important terrain where Sophie Lewis ventures. Abolish the Family is a short, sharp shock to our assumptions about the good life and how to achieve it.”

“Sophie Lewis and her expansive vision of feminism are desperately needed right now. She makes the work of undoing what ‘womanhood’ has come to mean look possible and irresistible.”

“In her writing, Lewis shows us the kind of feminist care that is within our reach and the intellectual work we must do to actualise it. Generous, charged and always underpinned by a comradely orientation to its reader, Abolish the Family traverses historical and contemporary arguments for unmaking the bourgeois family and methodically interrogates the idea that it is an unshakeable, ubiquitous institution that must be protected at all costs. Lewis draws on a number of radical political genealogies to say "no" - the nuclear family is a deficient provider of care and resource, a conceptual footstool for the racist nation-state and its many border regimes, a hotbed of gendered exploitation and violence… there are other possibilities! Let’s embrace them together!”

“Sophie Lewis is at the top of a new generation of scholars and activists thinking the transformation of gestational labor within contemporary pharmacopornographic capitalism. Neither simply natural nor banally cultural, gestation appears as the unthought core of gender and sexual politics, and the key of a forthcoming womb revolution: trans-Marx meets mammal's politics!”

“A bracing invitation to think beyond an institution that immiserates so many but that, for just as many, remains a fixed point of social possibility. Sophie Lewis is, as always, sharp, bold, compassionate and fearless.”

– Amia Srinivasan, author of The Right to Sex

“Sophie Lewis is at the forefront of a vital queer, trans, feminist communist movement to create an expansive field of revolutionary theory and strategy for today. Abolish the Family is an important contribution to Lewis's already discourse-shaping body of work, analyzing and seeking ways to move beyond the contradictory and complex function of families under conditions of extreme capital accumulation and capitalist crisis. A call for liberation from the privatization of domestic labor and the cruel scarcities of care under capitalism, Abolish the Family exhorts us toward something so much better than what we’ve got.”

– Jordy Rosenbery, author of Confessions of the Fox

“A lively, sharp and relatively short primer on family abolition ... Lewis does not pretend to have all the answers, but makes a solid case for joining her in finding them.”

“Sophie Lewis is our most eloquent, furious and funny critic of how the family is a terrible way to satisfy all of our desires for love, care, nourishment.”

An Attack on Abortion is Never Just About Abortion

Jessie Kindig's introduction to We Organize to Change Everything, an urgent, freely downloadable ebook from Verso Books and Lux magazine, for a movement under siege.