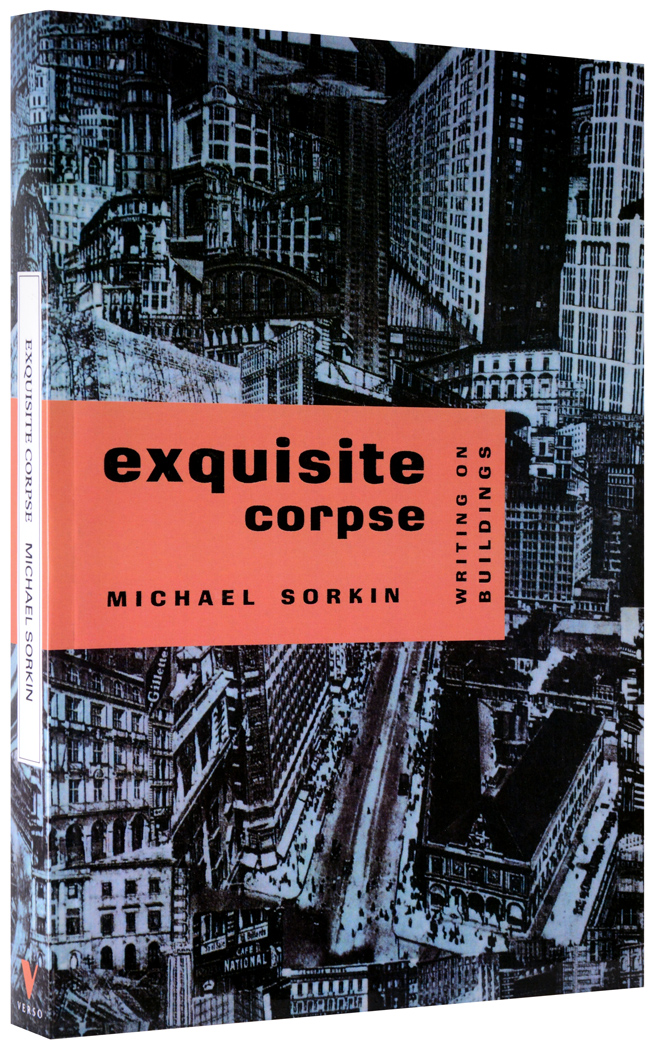 ‘Exquisite Corpse’ was a game played by the surrealists in which someone drew on a piece of paper, folded it and passed it to the next person to draw on until, finally, the sheet was opened to reveal a calculated yet random composition. In this entertaining and provocative book, Michael Sorkin suggests that cities are similarly assembled by many players acting with varying autonomy in a complicit framework. As unfolding terrain of invention, the city is also a means of accommodating disparity, of contextualizing sometimes startling juxtapositions.

Sorkin’s aim is to widen the debate about the creation of buildings beyond the immediate issues of technology and design. He discusses the politics and culture of architecture with daring, often devastating, observations about the institutions and personalities who have dominated the profession over the past decade. Their preoccupation with the empty style of ‘beach houses and Disneyland’ has consistently trivialized the full constructive scope of contemporary architecture’s possibilities.

Sorkin’s intervetions range from the development scandals of New York where ‘skyscrapers stand at the intersection between grid and greed’, through the deconstructivist architectural culture of Los Angeles, to the work and ideas of architects, developers and critics such as Alvar Aalto, Norman Foster, Paul Goldberger, Michael Graves, Coop Himmelblau, Philip Johnson, Leon Krier, Frank Llyod Wright, Richard Rogers, Carlo Scarpa, James Stirling, Donald Trump, Tom Wolfe and Lebbeus Woods. Throughout Sorkin combines stinging polemic with a powerful call for a rebirth of architecture that is visionary and experimental—a recuperated ‘dreamy science’.

“[Michael Sorkin] is brave, principled, highly informed, and fiercely funny. Read him and laugh; read him and weep; but read him, to see why the ’80s were so bad for American building”

“Michael Sorkin is the Lenny Bruce of American architecture: satirist, moralist, agent provocateur....His courageous, outrageous and often hilarious insights into the architectural culture of our times are expressed with antic brilliance and deep conviction.”

“To read Sorkin is to discover a genuine love of urbanism’s best offerings and a humanistically rooted disdain for the greedy and opportunistic types who view the city as a deregulated zone for plundering.”

“...a formidable opponent of the banal, the ugly, the stupid and the vapidly posturing which, he argues, are all around us...a punchy, provocative collection.”

“A thorn in the flesh of America’s more complacent architects—especially the postmodernists—Sorkin proves that it’s possible to write with wit, passion and insight about architecture.”

“Michael Sorkin’s brand of writing...is to thoughtful criticism what the Ayatollah Khomeini is to religious tolerance...”